Tracy Chou meets all the criteria that a Silicon Valley tech company looks for in a young developer: She is the daughter of two computer scientists; she grew up in Silicon Valley; she earned two engineering degrees from Stanford; and, by the age of 22, she had interned at both Google and Facebook.

In her own words, she had “the right credentials” that “opened countless doors” for her.

And yet, nearly 10 years into her tech career, having held engineering positions at Pinterest and Quora, Chou has come to the realization that the whole meritocracy system in Silicon Valley that she has benefited from is seriously flawed.

“Meritocracy is this myth that, if you have merit, you will rise up, and people who are in positions of power and success got there because they have the most merit, and they most deserve it. Having a lot of markers and credentials that Silicon Valley generally like, I didn’t quite question that either, when I first started working,” Chou said at Quartz’s How We’ll Win event in New York last week.

But as her workplace observations accumulated, her doubt on the structure she lived in grew.

“It turns out that the organizations and institutions that believe themselves to be the most meritocratic are often the least, because they are the least vigilant about examining and mitigating inevitable bias,” Chou told Quartz in a recent interview.

For what it’s worth, Silicon Valley arguably values meritocracy more than anywhere else. For that reason, tech companies generally prefer designing their own office playbook over following the suit of traditional corporations.

For example, to ensure fair merit-based promotion, Google established a system where an employee’s qualification for a promotion relies mainly on peer recommendations rather than a manager’s decision. This practice has now been widely adopted by many tech companies in Silicon Valley, including Pinterest and Quora.

In contrast, tech companies have done little to improve gender diversity (as well as other forms of diversity). They let unconscious biases get into day-to-day work and, in effect, intoxicate office culture.

Chou joined Quora in 2010 as the company’s fourth employee and moved to Pinterest a year later when it was a 10-person startup. She was part of the founding teams of two companies that both have grown into large platforms with tens of millions of users in a short period of time. However, as a female engineer on those teams, she was stressed and unhappy.

She felt constantly marginalized by her male coworkers, sometimes harassed. (In an essay for Quartz, she recalled an incident where a male coworker invited her to watch a movie with him in a dark room with the door locked and blinds closed.) On some days, she would duck into the women’s locker room at the gym during the day just to cry the stress out. The bottom line: She began to believe she was the wrong fit for tech.

Until she realized that she wasn’t alone.

In 2013, while still at Pinterest, Chou started a side project. She reached out to her peer engineers at other tech companies and asked them to share data on the gender distribution of their companies’ engineering teams on a Google spreadsheet. The goal was to get a real sense of exactly how many women were working in engineering positions in the tech industry, a statistics that employers had been reluctant to uncover.

The results were not pretty.

To date, 280 companies have voluntarily contributed data to Chou’s spreadsheet. The sample ranges from one-man startups to large institutions with over 5,000 engineers. Overall, women make up only 19.8 percent of engineers.

“The actual numbers I’ve seen and experienced in industry are far lower than anybody is willing to admit. This means nobody is having honest conversations about the issue. While companies do talk about their initiatives to make the work environment more female-friendly, or to encourage more women to go into or stay in computing, there’s no way of judging whether they’re successful or worth mimicking, because there are no success metrics attached to any of them,” she wrote in a Medium post in 2013 in which she shared her findings.

That lopsided gender ratio directly leads to the prevalence of Imposter Syndrome, a term that describes the frequent feeling of not deserving one’s success despite a proven record of accomplishments.

“One thing that women tend to do a lot is internalizing failures and issues,” Chou said. “We’ve seen this in classrooms—when girls don’t do well in classes, they will blame themselves. [They would say thing like] ‘I’m not talented, I’m not smart.’ But when boys don’t do well, they’ll say, ‘Oh, it’s just a bad teacher,’ or ‘that class is terrible.'”

“When I didn’t have enough data points from other people who have experienced the same thing, I just kept taking it out on myself,” she explained.

The same gender issue more or less exists in traditional corporate offices, too, even though companies that have been around for decades generally have more mature HR policies to prevent sexual harassment and outright discrimination.

Amber Baldet, the blockchain lead at J.P. Morgan who spoke at the same event last week, said she has always preferred a corporate environment over startups because there is “some HR protection, and people are actually better.”

“But there is a huge gap in an organization that size, between trading desks, operations and tech. They are all very different types of people. The trading desk is still not very friendly to women,” Baldet said. 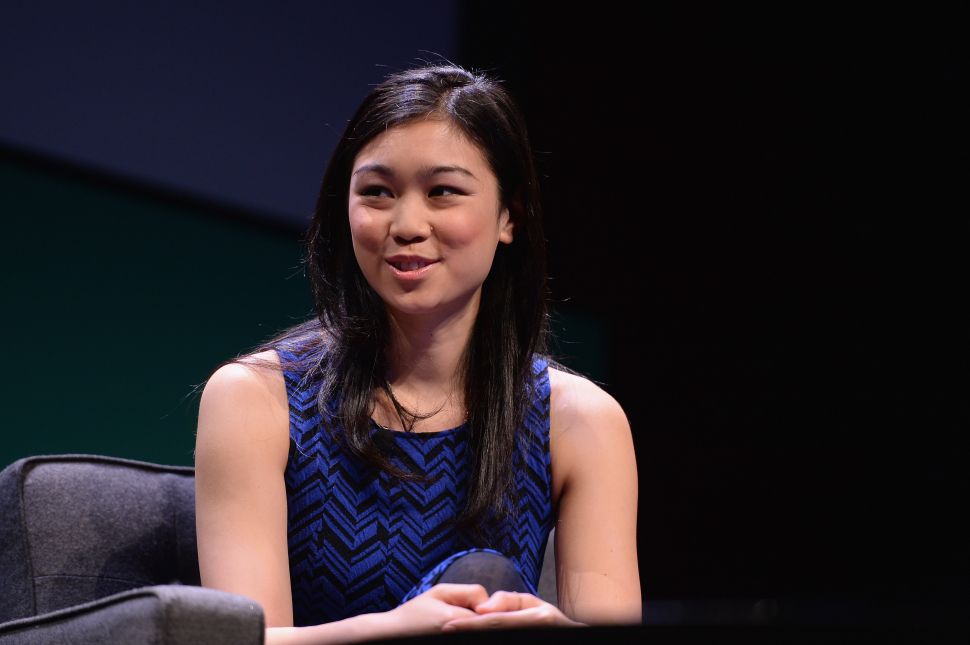