At March for Our Lives in New York City, the message was clear: Fuck gun violence.

The protest was one of some 800 protests around the world organized by survivors of the shooting at Marjory Stoneman Douglas High School in Parkland, Fla., on March 14, which left 17 dead and many injured. While the main event was in Washington, D.C., the sister march in New York City held its own. The event started at Central Park West and 72nd Street, though it stretched much farther than that. Mayor Bill de Blasio tweeted around 4:20 p.m. that 175,000 attended the march.

Amazing! Final NYC tally: 175,000 joined #MarchForOurLives. And this is a movement that has JUST BEGUN. These students WILL change America!

But for activists, the protest began way before they arrived to the Upper West Side.

Individuals and groups made their way to trains with posters under their arms and coffee in hand. Activists crammed onto the trains from all over. On the C train, one preteen girl sat on her mother’s lap to make room for others—on her forehead the girl had written “#enough”. Some dressed in hunter orange, like one man donning an orange faux fur hat and blazer, standing below an orange ad that read, “Compassion has a plan.”

When those going elsewhere needed to get off, it was a human Rubik’s Cube to make a pathway. And the closer the train got to 72nd, the more packed the train got.

“Make space for the activists,” a man repeatedly called out on the C train.

“This is the Peace Train,” another chimed in with.

The crowd was tame, neither rambunctious nor bitter. But it was a disruptor of New York’s everyday life.

“If you ain’t going to the protest, get out the train,” one lady said, wedging into the train.

When the conductor made the announcement that “those wishing to participate in the march will have to get off at 81st,” a buzz of excitement would through the crowd. “It’s that big already?”

It was that big already.

The crowds were at a halt at 81st, too far to hear any speeches. And the crowd only grew from there.

Activists were eager to start marching but took the standstill to read others’ signs and take photos. One activist held a sign that read, “Fuck your thoughts and prayers. We demand action.” A police officer in the buffer zone told her, “That’s not very nice. There’s kids around.” Another marcher would later tell her, “You need to be careful with all these children here.”

But the children didn’t give a fuck.

Some activists started to chant things like call-and-return “Tell me what Democracy looks like, This is what democracy looks like” or the less rhythmic “We call BS.” A mother on the steps of the Natural History Museum joined in on the chants while braiding her daughter’s hair.

Speakers were scheduled to start the protest before the marching began. But in the back, none of that was heard, and as the noon start time came and went, the crowd grew restless. Some of the adults with children, and many without, started to make for the exit, most having to walk against the crowd. Some begged police officers along the barriers for a shortcut but were refused. Others sat or even lay on the road, too tired to stand anymore. But the majority persevered.

Finally, a little after 12:30 p.m., and after a few false starts initiated by waves of cheers, the march was on.

Some merely shuffled along. Others, especially hordes of children, yelled with all their might.

“We might be small,” one group of young girls cried out, “but our voices are tall.” Later the same group would stop and command a crowd.

“Our voices are louder than the so-called power,” they sang to the crowd gawking and filming.

A family came three-generations strong and together carried a banner that read “End Gun Terrorism.” A toddler sat on his father’s shoulders and waved to people and even joined the chanting.

“Hey, hey. Ho, ho. The NRA has got to go.” In the next moment, he was marveling at all the people. “Looks like all of New York City is here,” he squealed to his father.

His mom followed behind and held the hand of his older brother, who asked, “What’s the NRA?”

“The NRA,” his mother answered, “is group that advocates for gun rights.” And when the crowd called out “Kids, not guns,” and the boy asked her why they said that, she said, “Because they want the government to spend money on children instead of guns.”

The real climax of the march came not at 42nd street, where the march ended, but at Trump International Hotel and Tower. A wave of middle fingers sprung from the crowd—no minding of the children around—and there were calls to “Vote them out.”

Plenty of people were on hand to sign marchers up to vote. Volunteers came prepared with clipboards and voter registration slips, which they promised they’d mail in for those who filled it out right then and there. Many of the participants, however, were too young to sign up. Though as one student’s sign read . . .

“I’ll be voting in seven years.” 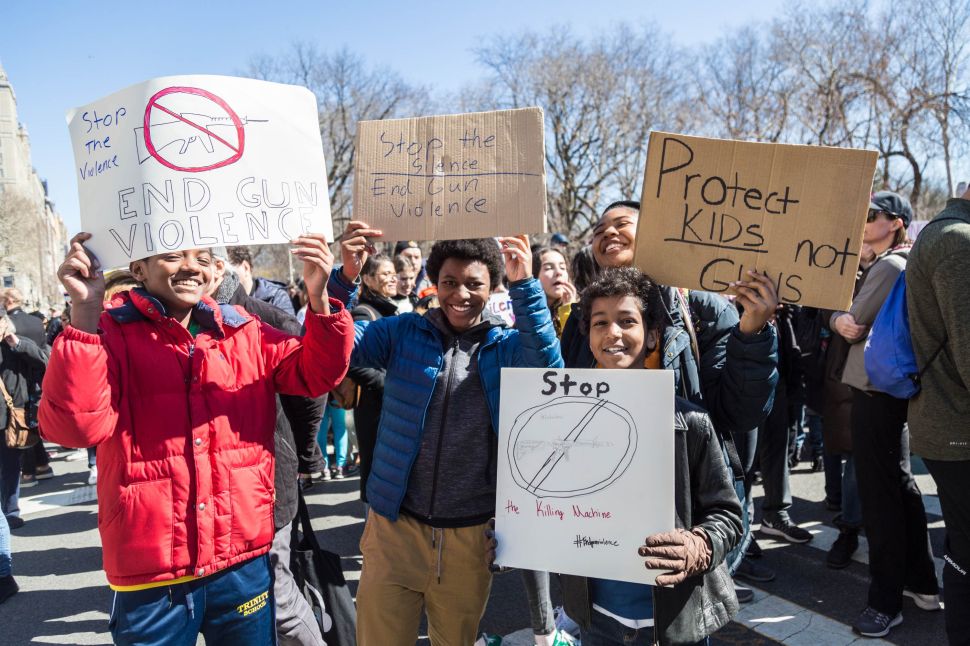 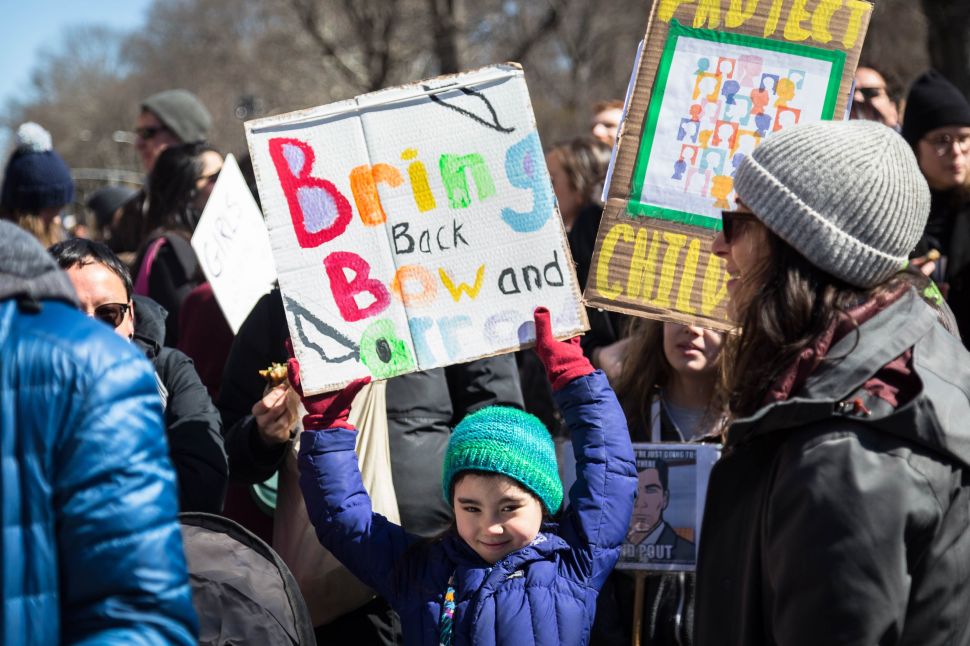 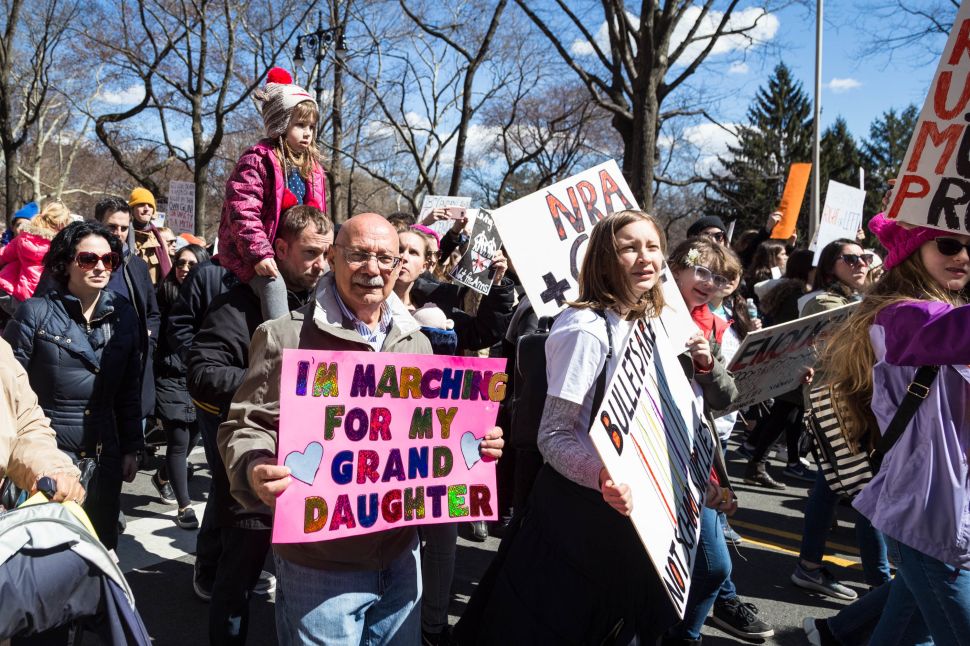 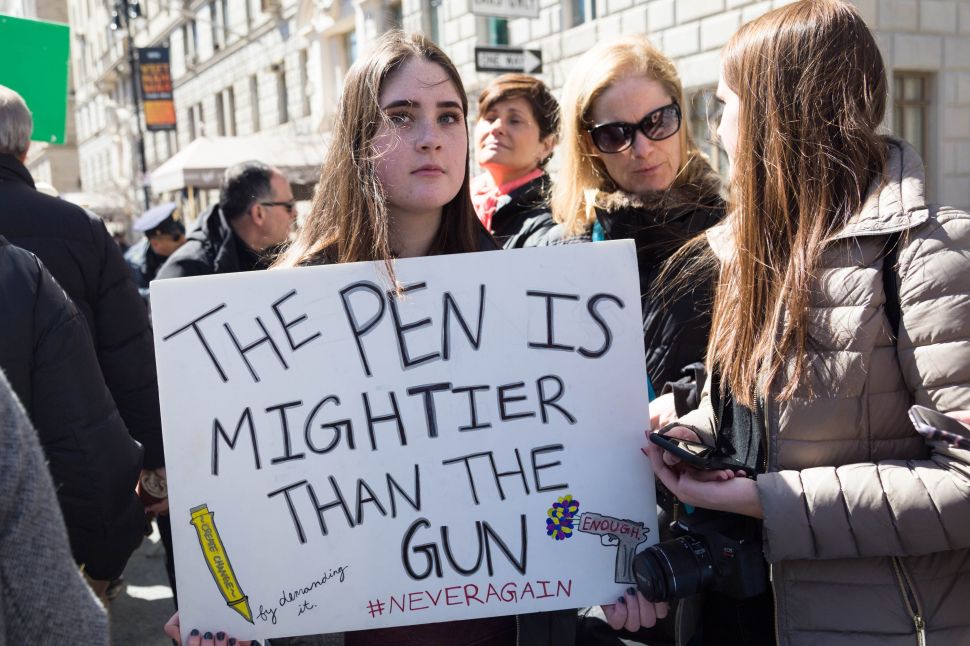 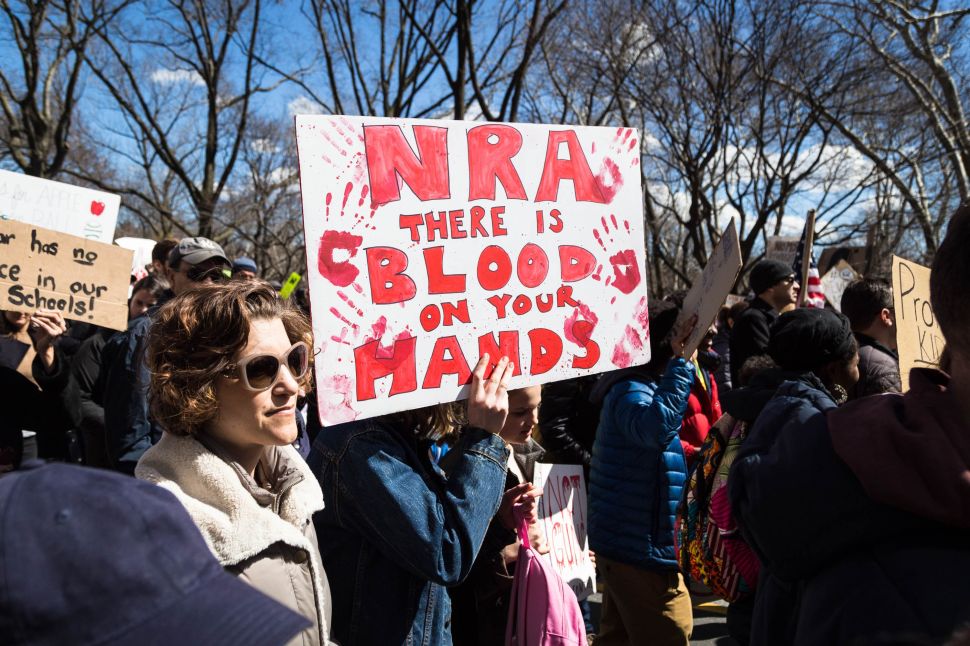 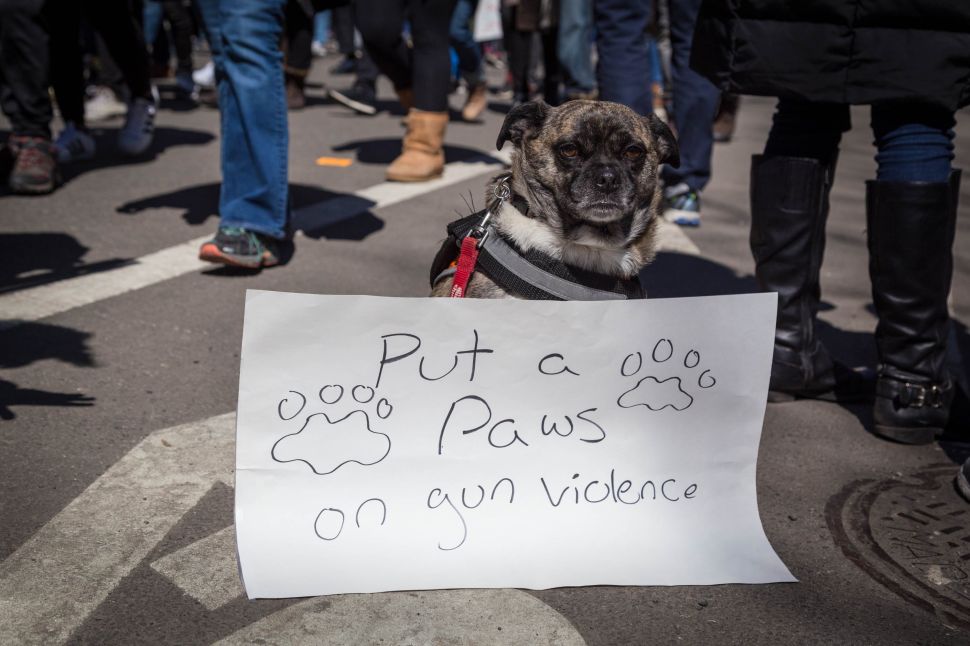 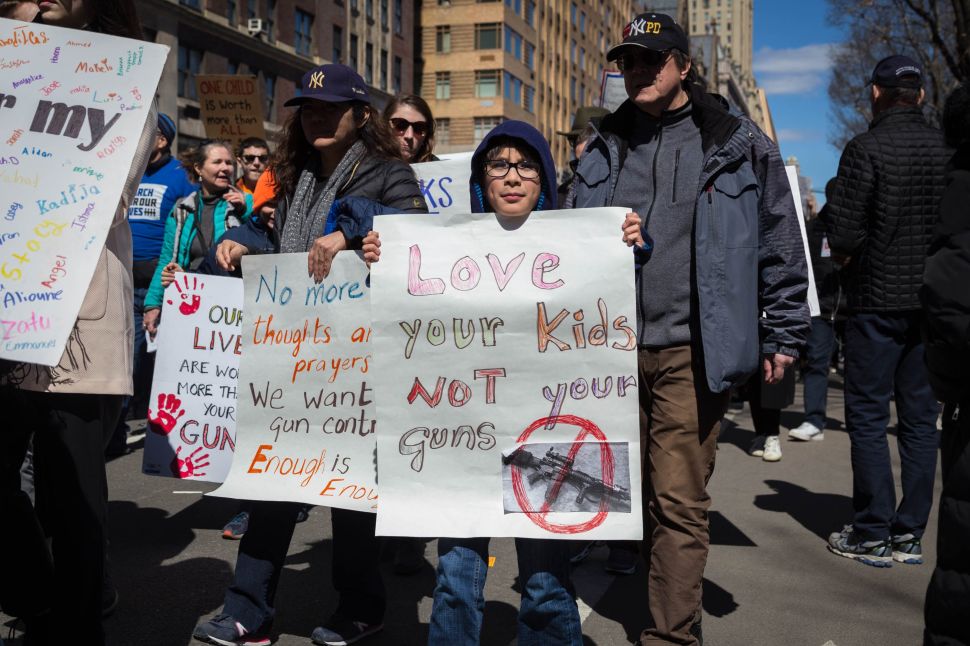 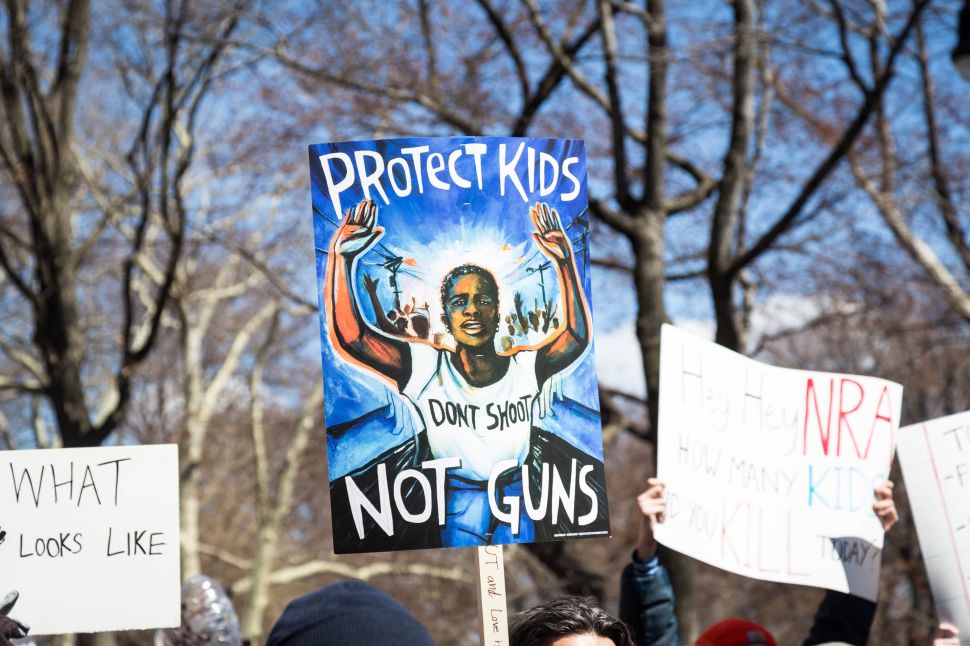 Photographs by Kaitlyn Flannagan for Observer. 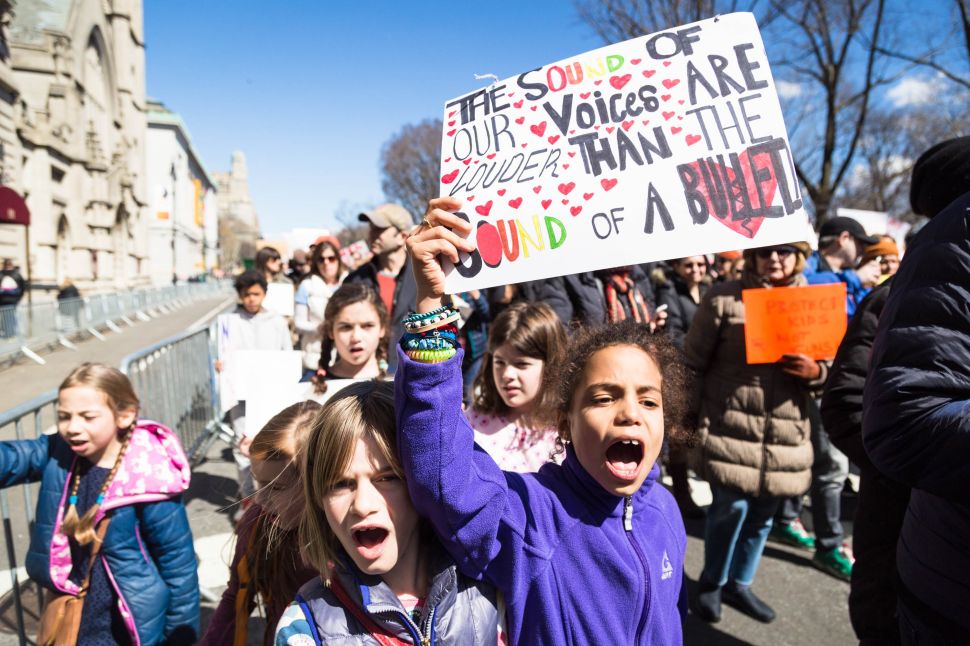