Prince Harry’s pricey royal wedding isn’t until May, but according to The Times, his future wife Meghan Markle is already celebrating. Markle had her hen party (i.e., a British bachelorette), joining her best friends for a day of pampering over the weekend.

Unfortunately, her hen do was nothing like The Bachelorette and it certainly wasn’t similar to an American party, complete with inappropriate straws and copious amounts of alcohol. Instead, Markle is rumored to have ventured to a spa with her gal pals for a bridal shower at Soho Farmhouse, in Oxfordshire.

Unfortunately, the Duchess of Cambridge was unable to attend, as she is seven months into her pregnancy at this point. It also doesn’t look like her friend Priyanka Chopra stopped by, as she’s posting Instagram stories from Los Angeles. Perhaps it’s because she spoke out about their high-profile relationship. Everyone knows the royal family is nothing if not discreet.

But the group is rumored to have included a reality television personality, which isn’t all that surprising given Markle’s Hollywood past. Markle was joined by former Made in Chelsea star Millie Mackintosh, who is apparently helping Markle plan the wedding. Her best friend Lindsay Roth recently posted a snap of high tea in London, confirming she’s in the area, and Markle’s Pilates instructor Heather Dorak was also reportedly in attendance.

It’s possible Jessica Mulroney, the stylist to Justin Trudeau’s wife who often dresses Markle, ventured to England for the adventure. Other potential guests include designer Misha Nonoo, Baron Piers von Westenholz’s daughter Violet and Markus Anderson, a mutual friend. No word on whether her Suits co-stars joined her.

Anderson is said to have helped plan the day, as he’s a consultant for Soho House, the member’s only club that Soho Farmhouse is part of. The chosen locale sits on 100 acres of countryside, complete with spas, a movie theatre, tennis courts and horse stables. They even offer a special wedding package if Prince Harry and Markle want to opt for something a little more low-key. Perhaps Markle used the cinema to host an exclusive Suits viewing, as the trailer was just released for her final season.

Since Markle won’t be married for ten more weeks, she’s sure to undergo another round of pampering before her big day. Hopefully, her time at the spa will include a blowout so she can ditch the messy bun once and for all. 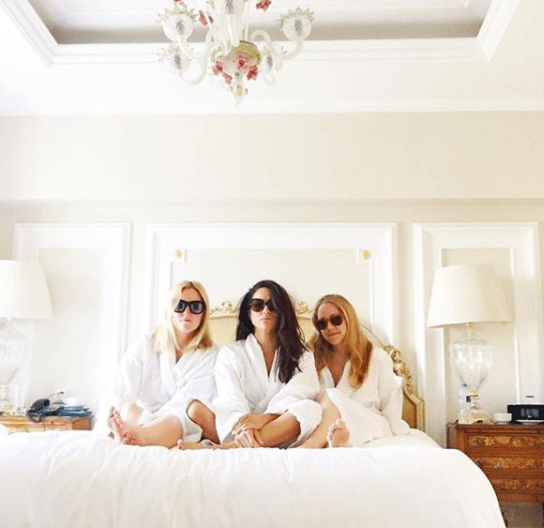