Before Meghan Markle was a noted lifestyle blogger, a Suits star and finally, a future royal, she was a noted calligrapher. She often sent handwritten notes and, at one point, was using her cursive skills to make some money.

So it comes as little surprise that Markle’s invitations are Pinterest perfect, seeing as she had plenty of practice. “I used to be a calligrapher for weddings and events–that was my side job while I was auditioning,” she told Good Housekeeping in 2017.

When she was a struggling actress living in Los Angeles, she split her time between waitressing and addressing letters for celebrities and big brands. At one point, she addressed celebrity letters for Dolce & Gabbana for the holidays, but now she’ll most certainly be on the receiving end of such correspondence. Her biggest guest list was for Robin Thicke and Paula Patton’s wedding, according to an interview with Esquire in 2013. While the marriage didn’t last, they’ll always be able to say a royal was in their employ at the time of the wedding.

In case, for some reason, you missed your invitation (they haven’t officially been sent out yet, so there’s still hope), they’re easy enough to view online. They read, “His Royal Highness the Prince of Wales requests the pleasure of the company of ______ at the marriage of his royal highness Prince Henry of Wales with Ms. Meghan Markle at St George’s Chapel, Windsor Castle on Saturday, 19th May 2018 at 12 noon followed by a reception at Windsor Castle.”

The dress code is “uniform,” which apparently means “morning coat or lounge suit, day dress with hat,” so expect plenty of fascinators. And the “Ms.” is definitely on purpose as it indicates that Markle has been married before. The invites offer a helpful reminder that Prince Harry’s name is actually Henry, although strangely enough, Markle’s first name, Rachel, is not included.

The invitations, which feature gold gilded edges, were created by Barnard & Westwood, fine printers and bookbinders based in London. They were issued by Prince Charles, which is noted by the gold three-feathered heraldic badge that represents the Prince of Wales. But don’t worry, Queen E is still very much involved; she will be hosting a lunchtime reception for the couple.

Actually, it’s probably much better that Markle didn’t have to hand address each note, as 600 people have been invited to the wedding—including a few ex-girlfriends of Prince Harry. 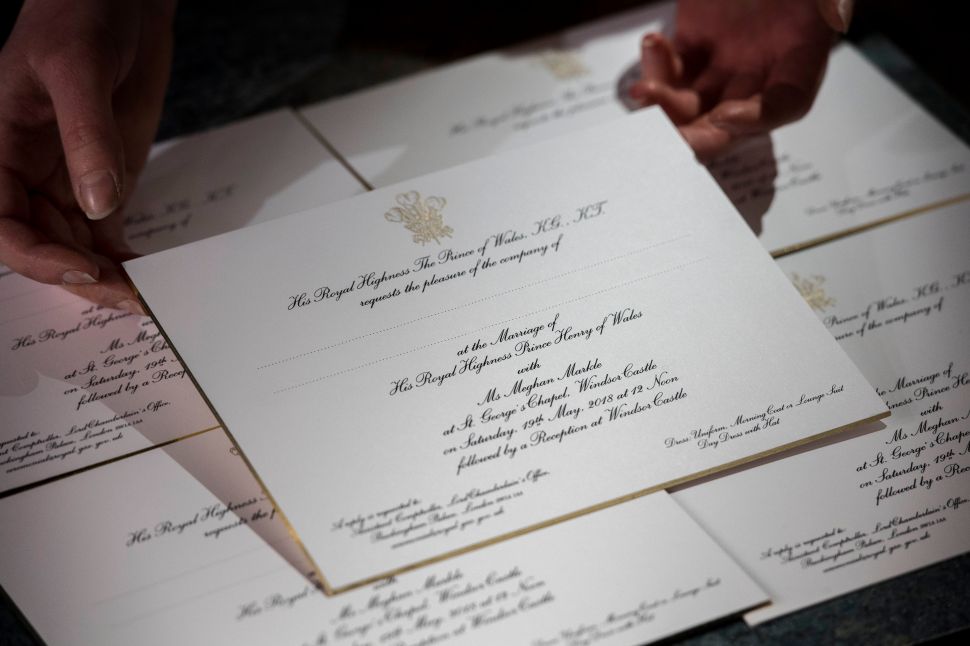