The school shooting in Parkland, Florida, which claimed 17 lives last month, has reignited the debate over the use of school safety agents, metal detectors and scanning in New York City’s public schools.

Mayor Bill de Blasio and his wife, First Lady Chirlane McCray, convened a town hall on Thursday afternoon that attracted roughly 100 high school students to discuss steps the city can take to ensure safety in schools amid a national debate about gun control.

But the bulk of the students who spoke up centered the conversation on issues they see regarding the overuse of metal detectors in schools primarily made up of people of color and mistreatment by school safety agents.

Olukemi Jemilugba, a student at Scholars’ Academy in the Rockaway Park section of Queens, said her school—which does not have metal detectors—is directly across from the Channel View School for Research, which is mostly comprised of people of color and has metal detectors.

She said Channel View students go through “dehumanizing things every single day” and that she grew up with them, noting they are “not terrible people.”

“It’s more about counseling than about just putting in metal detectors and putting in police because when it comes to violence, the first thing we automatically wanna do is to put in these authorities to try and stand here and tell us that everything is gonna be O.K.,” Jemilugba said. “That’s what we wanna do but instead we put in police officers, and in my school, I feel like as a person of color, I feel like the school safety officers, they’re there more to watch me instead of help me.”

She noted that when she first learned about the Parkland shooting, she was in her Advanced Placement history class and immediately said to herself, “It’s happening again and again and again.”

“After Columbine, the reaction was not to invest billions of federal and local money in policing students through more police officers and metal detectors,” Colon said. “They received resources such as counseling and mental health support, but what did communities of color get? Metal detectors and school safety officers by NYPD.”

Nearly 20 years later, Colon said, research shows cops and metal detectors do not make schools any safer. Black and brown students, she said, make up 90 percent or more of all students getting arrested and receiving summonses.

“Why are you making the same mistake—prioritizing police and metal detectors—instead of ensuring we have enough social, emotional and mental health support and resources in our schools?” she asked.

Another student, Sagar Sharma, who attends John Bowne High School in the Flushing section of Queens, pointed to mistreatment by school safety agents after a student was stabbed at John Bowne in 2017.

“During that week, we were greeted by a school safety agent with the phrase, ‘Good morning, John Bowne stabbers,'” Sharma said.

One student tells @NYCMayor school safety officers are at schools to watch her rather than protect her pic.twitter.com/K9HublpxaP

Since the 1980s, metal detectors have been used in the city’s public schools, according to the city’s Department of Education (DOE).

Scanning is carried out in public schools on a full-time basis whenever the school is being used or on a part-time basis during randomly assigned days of the week during school hours, the DOE said. Schools are also randomly selected for scanning throughout the year or scanning may occur at a specific school “when there is reason to believe that there is a threat to the safety of the school community.”

“We’re doing it randomly throughout the entire city of New York, right,” Mark Rampersant, the DOE’s security director, said. “And so it is not meant to make anyone feel uncomfortable or disrespect anybody in any way, and if that’s what you’re feeling during that process, we appreciate if you say something in the moment.”

He seemed to place the burden of responsibility on students, pointing to the “Team Up Tuesdays” initiative that encourages dialogue between law enforcement and youth and an integration memo encouraging principals to bring school safety agents to faculty meetings and student orientations.

De Blasio said he is creating an atmosphere whereby people associate cops and school safety agents with dialogue but acknowledged that youth may not be experiencing that new model and expressed enthusiasm at the idea of young people meeting with school safety officers.

As to the unannounced scanning, de Blasio said he has an obligation to all students and parents.

“We’ve got to show that measures are being taken for safety right now separate from how we build toward something much bigger and better going forward,” the mayor continued.

Both the mayor and McCray acknowledged the need for more investment in mental health services, pointing to McCray’s ThriveNYC initiative.

Roughly 50 high school students protested outside the town hall against the use of metal detectors. Darian Agostini, 23, a youth organizer for Make the Road New York, an immigrant advocacy group, told Observer he helped coordinate some students to ask questions at the town hall.

“We wanted to make sure that young people’s voices were heard on the outside and that the mayor wasn’t going to be able to ignore that call for removing police officers, removing metal detectors which is the integral part of creating safety in our schools,” Agostini said.

Some students had a different view.

Morgan Hesse, a student at Stuyvesant High School, said students were scared after a terror attack nearby in October. She suggested school safety agents have meetings with classes or meet with students during a free period.

“The school safety officers in our school… I find that they are people that we can talk to, but I feel like there can be something more there—like interactions with them that are not just forced as we enter,” Hesse said.

Joseph Silverstein, a senior at Tottenville High School on Staten Island—who has self-published a book that looks at current events from the eyes of a young conservative—requested that there be more metal detectors and police officers in schools.

“I know it costs a lot of money, but New York City has a big budget,” Silverstein said. 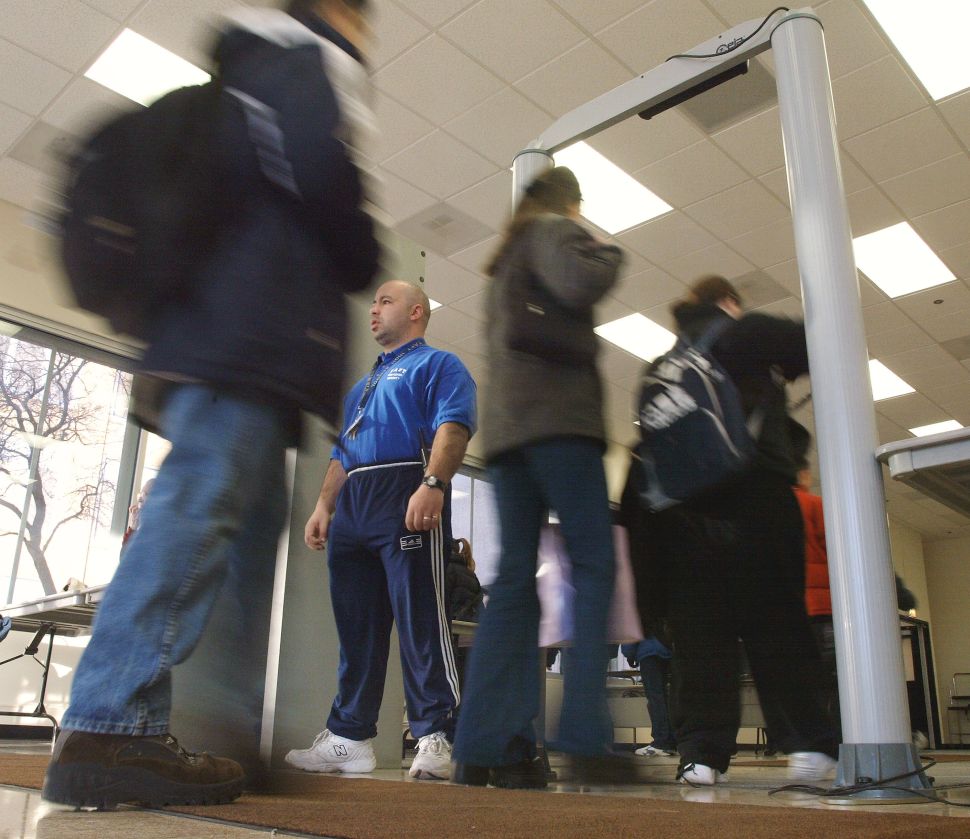