A decline in off-peak subway service is disproportionately targeting millions of service sector workers in New York City, particularly those who are lower-income, people of color and immigrants, according to a new report by City Comptroller Scott Stringer.

In the report, titled “Left in the Dark: How the MTA is Failing to Keep Up with New York City’s Changing Economy,” Stringer notes that while commuting trends throughout the city have transformed over the years, subway service has not changed to adapt to those patterns.

Despite the fact that 57 percent of job growth over the last 10 years has occurred in the healthcare, hospitality, retail, restaurant and entertainment industries, subway service—40 percent of private sector employment in the city—has not adapted to increasing ridership among individuals whose work hours do not fall within the traditional work schedule of 9 a.m. to 5 p.m., according to the report.

“It’s a crisis within a crisis, because over the past decade, the nature of our economy has changed and ridership late-nights and early mornings has risen, while actual service to match it has not,” Stringer said in a statement. “That means that those who need service to get to work during non-traditional hours are stuck with a crisis not of overcrowding, but of infrequency.”

His office looked at the human impact of delays, the financial price of slow-downs in subway service and the crisis afflicting the bus system.

“Now, we’re showing how immigrants, New Yorkers of color and lower-income neighbors are disproportionately affected by the off-peak subway crisis,” Stringer continued. “The time for action is now. We need more service in the early morning and evening, and we need to immediately fund the [MTA Chairman Joe] Lhota emergency plan to ensure those trains are actually running on time. Now more than ever, New York City needs to step up to support the MTA in this time of crisis.”

Since 2011, the MTA would add trains in the early morning to meet the demands of an ever-increasing ridership, Stringer said.

But since the Great Recession, the comptroller explained, as ridership increased between 5 a.m. and 7 p.m., the MTA did not respond to that change, resulting in longer wait periods for trains that are more crowded.

In 1985, half of the daily ridership into the Manhattan central business district took place between 7 a.m. and 9 a.m.—by 2015, that plummeted to 28 percent, the report found.

In the mean time, off-peak subway ridership jumped in the early mornings (5 a.m. to 7 a.m.) and evenings (7 p.m. to 11 p.m.) as a result of the expansion of the city’s service sector and more tourism.

In New York’s service sector, employees typically serve customers, clients and patients early in the morning as well as late into the evening, Stringer noted. The sectors added more than 350,000 employees over the last decade.

Individuals traveling to work off-peak now make up 47 percent of subway and bus commuters, compared to 39 percent in 1990, the report states.

Despite this shift, service is substantially reduced during the early morning, from 5:30 a.m. to 6:30 a.m., and later evening—8:30 p.m. to 10:30 pm—travel, at a time when many service sector workers rely on public transit, the report found.

Those neighborhoods have more than 10,000 service sector jobs, which make up more than 50 percent of total employment in the area and receive 50 percent less subway service during the early morning—5:30 a.m. to 6:30 a.m.—than during the rush hour from 7:30 a.m. to 8:30 a.m, according to the study.

And New Yorkers that commute between 5 a.m. and 7 a.m. earn $7,000 less than those who commute during the rush hour and are more likely to be foreign-born, a person of color, without a bachelor’s degree and working in the service sector. 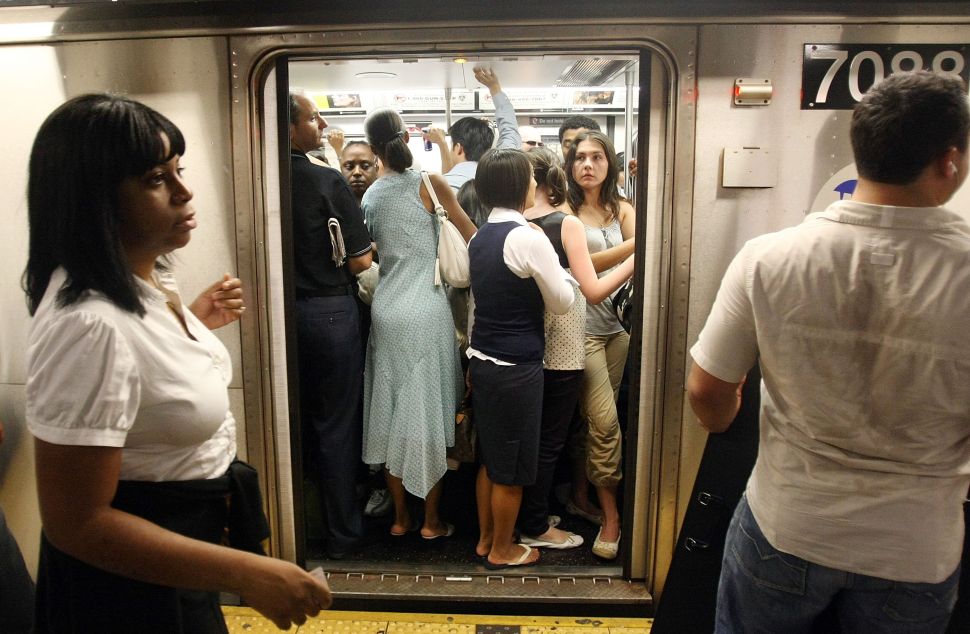