Gov. Andrew Cuomo is giving Mayor Bill de Blasio and the City Council an ultimatum: decide on the best way to implement a “state of emergency” that he has already vowed to undertake for the New York City Housing Authority (NYCHA), or the state will take matters into its own hands.

The city, on the other hand, isn’t buying it.

De Blasio administration officials are arguing that what Cuomo is requesting is not an actual emergency declaration and are calling on him to provide more money for the public housing developments—which have about 400,000 residents—and approve design-build authority, which would speed up the construction process and reduce costs.

In a letter to City Council Speaker Corey Johnson and First Deputy Mayor Dean Fuleihan released on Monday morning, Alphonso David, Cuomo’s counsel, said the best way for the state to help is by providing design-build authorization (combining planning and construction) and an emergency declaration by the state, which Cuomo announced he would do on Wednesday night.

The letter was also sent to Jim Walden, an attorney representing tenant leaders who are suing NYCHA over poor conditions in public housing.

David noted an emergency declaration could consist of replacement of existing management, the appointment of an independent monitor, the selection of contractors who will handle repairs or the appointment of a public health monitor to concentrate on lead testing.

He is seeking guidance from the city to determine which option it believes is suitable.

“We believe time is of the essence, as it is very possible that the federal government—through either the Department of Housing and Urban Development or the Department of Justice—may take action to exert control through a monitor, compliance assurance officer, or takeover,” he wrote. “This would be the worst case scenario as the local government’s power and control would be usurped—the city embarrassed—and the residents would essentially be in the hands of this federal government.”

NYCHA has recently been plagued by a lead paint scandal, as well as problems with heating systems and boilers that left public housing residents without heat or hot water on some of the coldest days of the winter. NYCHA’s chairwoman, Shola Olatoye, has faced calls for her resignation.

After visiting the NYCHA Jackson Houses in the South Bronx on Monday morning, Cuomo announced that the state Health Department will investigate public health and safety hazards at NYCHA properties.

New York State’s Health Commissioner Dr. Howard Zucker will conduct a formal probe into properties to examine issues such as mold and potential lead paint. Cuomo is also negotiating the creation of a tenant-led oversight council to oversee how funding is spent and how repairs are being conducted at the NYCHA in the fiscal year 2018-19 state budget.

“The problem is the NYCHA management bureaucracy, much of which is not their own doing,” the governor told reporters. “There are federal rules, there are a lot of regulations they have to follow. How do we bypass that management bureaucracy and get contractors in here working, working quickly? I will do everything I can on the state level.”

He is meeting with the Council to find out which type of emergency declaration the city is seeking. Cuomo also urged the state Assembly to tell him what solution they want, with a goal of getting the declaration into the state budget that is due on April 1.

He also added that the state made $300 million available to the NYCHA despite the fact that public housing authorities in the state are entirely locally-managed and controlled. And he argued that 2022 is too long a time frame for the city to fix the NYCHA developments’ boilers and heating systems.

“NYCHA hasn’t even been able to tell us how they would spend the money,” Cuomo added. “That’s the point. There’s no point in giving an agency money that’s gonna take three years to spend the money.”

On Saturday, Cuomo took to Twitter to blast the conditions at NYCHA—comments that appeared to be directed at de Blasio. And the mayor’s spokesman, Eric Phillips, responded with equally as blunt remarks.

It’s like this guy hasn’t been the NY Governor, the top federal housing official, or an NYC prosecutor and state AG for three decades. He could help right now by fully funding city schools and keeping his promises on NYCHA and Rikers. Or he could Tweet. https://t.co/snHrn96HdI

At a press briefing at City Hall, Fuleihan and Alicia Glen, deputy mayor for housing and economic development, said that the city needs $200 million in state funding to be released, as well as design-build authority.

The NYCHA, Fuleihan explained, submitted a plan in November requesting $200 million, but he said the state has yet to approve it.

“This is addressing needed repairs that we wanna expedite,” he continued. “We wanna work with them. There’s two weeks left. We need to take every action possible to make sure that happens. Right now, it’s a frustrating situation, but a lot can be accomplished in the state budget over the next two weeks.”

When asked about the governor making the request for a state of emergency, while the mayor is in Washington, D.C., Fuleihan defended his boss.

“The mayor is on city business,” he added. “He is meeting with other mayors. He is pushing an agenda that’s appropriate for this city.”

Glen contended that the governor is erroneously presenting the emergency declaration as “some magic cure-all.”

“I don’t think it’s an emergency declaration,” she maintained. “I think it’s him attempting to articulate what he should have been doing for the past couple of years.”

She noted that the mayor announced a $200 million investment to replace boilers and upgrade heating systems at 20 NYCHA developments by 2022.

She dismissed Cuomo’s suggestion that every single NYCHA boiler can be replaced by next season as “disingenuous.”

“That actually shows a lack of understanding of the complexity of the stock that we’re facing,” Glen continued.

Bronx Borough President Ruben Diaz Jr., a close ally of Cuomo and a rumored 2021 mayoral candidate, argued that the governor’s involvement will speed up the process.

“Those conditions were created by the New York City Housing Authority,” Diaz Jr. said.”This has to change. They deserve better. NYCHA residents deserve better… and with Gov. Cuomo here today, I am confident that we will do better.”

Bronx Councilman Ritchie Torres, chairman of the Council’s Committee on Oversight and Investigations—who previously headed the Committee on Public Housing—said the Council found that 323,000 residents were deprived of heat and hot during the winter.

Torres previously accused the governor of “playing politics” with the NYCHA after the governor redirected $100 million meant to fix roofs. 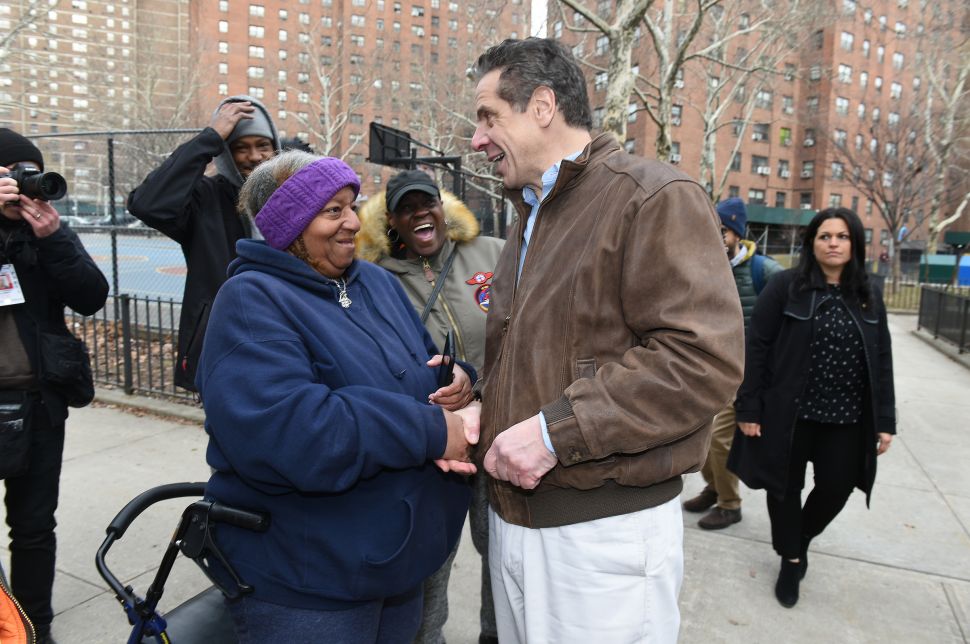