Metropolitan Transportation Authority (MTA) Chairman Joe Lhota warned that if New York City does not fund its half of a plan to fix the city’s beleaguered subway system, the MTA will have to stretch out the plan—and benefits to commuters will be “muted.”

At the end of July, Lhota unveiled the NYC Subway Action Plan: an $836 million short-term plan to yield upgrades within a year and an $8 billion long-term plan that focuses on long-term improvements, such as better subway cars, the adoption of a new signal system and modern communications technology. He proposed that the city and the state split the cost of the short-term plan.

While Gov. Andrew Cuomo has committed to his half, de Blasio’s budget does not include funding for the plan. De Blasio has maintained that there is already money available in the state budget. The MTA is a state-run agency and therefore under Cuomo’s authority.

“Governor Cuomo’s executive budget includes capital and operating support to fully fund the state’s half of the $836 million subway action plan,” Lhota said in his opening remarks at a City Council hearing on Wednesday morning. “New York City’s budget makes no such commitment. As a result, the benefits of this plan—as strong as they are to date—have been muted, and we are unable to implement the plan as quickly as we originally envisioned it.”

Lhota recently said the plan has been stretched out via a slowdown in the hiring of new workers. He noted that the agency is slowing down the hiring in a “reasonable way” but is continuing the extra overtime work with its existing workers “as we bring on the new.”

The MTA chairman told the Council that the agency is currently implementing the plan’s first phase and that it is working.

“We are improving wait times, increasing the distance between subway train breakdowns and reducing the number of major incidents resulting from signal, track and power failures,” Lhota said. “We are tracking our progress and reporting it to the public on our new dashboard. But let me be clear: I know we are far from finished.”

He noted transit workers and managers are “working day and night” under the plan to install miles of new track and repair thousands of right-of-way and station defects. And the MTA’s new leadership team—which has been in place for less than a year–has significantly improved the way the agency schedules and coordinates work along and within its tracks, Lhota said.

“We revamped this entire process to maximize productive work and reduce unnecessary overtime,” he continued. “We are saving even more time by ensuring that we have all the necessary people and equipment ready to go at a job site exactly when they’re needed.”

The end result, he argued, is that the agency is getting more work done and is saving “hundreds of millions of dollars in the process.”

“The best part is, we are expanding these new work rules to other subway work,” Lhota added. “All new contracts will have these new rules. We are accomplishing meaningful, productive work on weeknights. And we are going to get years’ worth of deferred work completed this year.”

As of December 2017, major incidents, which are defined as problems that cause delays in more than 50 trains, have dropped from 81 to 50—or 38 percent—compared to June, according to amNew York.

The top MTA official also described the lack of support from the city as “especially disappointing” given an analysis by City Comptroller Scott Stringer released in August 2017 that found the city’s economy grew 3.3 percent in the second quarter of 2017. The number of employed New Yorkers increased by more than 87,000.

“These new New Yorkers—and newly-employed New Yorkers—are using our subway and bus system every day, just like most New Yorkers who have been here forever,” he said. “And it makes me wonder, Council members, what better time than now to invest in our transit system?”

A panel formed by Cuomo last year to come up with a congestion pricing proposal recently proposed charging drivers $11.52 in the most traffic-heavy parts of Manhattan. The mayor has touted a millionaires tax on wealthy New Yorkers to fund subway repairs.

Lhota said he is “encouraged” by the “robust conversation” occurring around congestion pricing as a solution. Collaboration with the city, he contended, is necessary.

“Overall, I’d say the city gets quite a bargain from its investments in our subway and bus network,” he continued.

Jaclyn Rothberg, a spokeswoman for de Blasio, said the state should institute a fee on for-hire vehicles as an immediate revenue source.

“As the mayor has said before, we agree with the speaker on the need for more city oversight and input on MTA spending,” Rothberg said in a statement. “For true progress, this all must coincide with the governor putting the $456 million the state has previously diverted toward upgrades that get trains moving on time.”

City Council Speaker Corey Johnson—who supports congestion pricing—contended that the action plan is “long overdue” but laid out some conditions for the city to support it.

He argued tri-state residents who also use the subway should contribute to the plan and that the MTA has to agree to complete transparency and regular reporting. And he said the city is not interested in financing “superficial station renovations.” Any direct subsidy, he said, should be a one-time occurrence.

“Regardless of the form that such financial support may take, it is absolutely imperative that the city’s money go directly to improving the subways and nothing else,” he said. 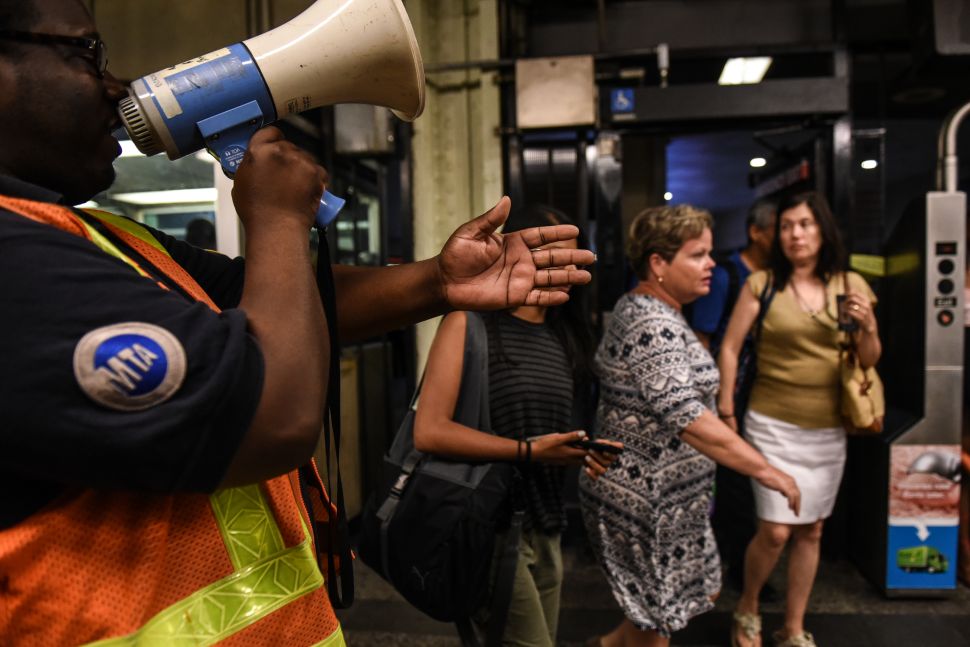