Over the last eight months, New York City’s subway system has found itself caught in a feud between Mayor Bill de Blasio and Gov. Andrew Cuomo.

The mayor—who refuses to commit to his half of an $836 million short-term plan to fix the subway on the grounds that there is money available in the state budget—is pushing for a millionaires tax on the wealthiest New Yorkers to finance subway repairs and reduced fares for low-income New Yorkers.

The governor has committed to his half of the subway turnaround plan and, Fix NYC, a panel he formed, unveiled a congestion pricing plan in January that includes the installation of a zone pricing program—beginning with trucks and subsequently for all vehicles—entering Manhattan’s central business district below 60th Street.

The state Assembly has put forward a congestion pricing plan as part of its budget that includes a $2.75 fee for ride hail cars, limousines and black cars for each trip below 96th Street, $1 for trips above 96th Street and a 50-cent fee for yellow taxis and green cab street hails below 96th Street. But the Senate Republicans did not include any version in their budget.

Cuomo recently said he hopes to start with a potential first phase of a congestion pricing proposal in which ride hail cars like Uber and Lyft face a surcharge. In August, he called it an idea “whose time has come” and included the proposal in the latest state budget.

Despite still pushing for a millionaires tax, de Blasio called the FIX NYC plan an improvement over previous plans and has expressed support for a fee on for-hire vehicles. Cuomo has said the millionaires tax is “dead on arrival” due to opposition from Republicans in the state Senate and that a congestion pricing proposal would be hard but achievable in the state legislature.

The state legislature has until April 1 to make a decision about whether to include the Fix NYC plan in the fiscal year 2019 budget.

Politics aside, which of these proposals will actually work?

Observer talked to transit experts to get their takes.

In early August, de Blasio proposed increasing the city’s highest income tax rate from 3.876 percent to 4.41 percent on taxable income above $500,000 for individuals and above $1 million for couples—which applies to 32,000 city residents, or 0.8 percent of tax filers.

The new tax would also finance half-priced MetroCards for low-income New Yorkers by using $250 million of the revenue, helping up to 800,000 New Yorkers (in response to advocates’ call for “Fair Fares” in the past, de Blasio said the funding should come from the state).

“The mayor came forward and joined the issue of affordability with long-term capital support of the subway system together, and I think he appropriately, obviously at that time, focused on the incredible wealth that’s available to a select few New Yorkers and really this would be a very modest imposition on them,” David Jones, an MTA board member appointed by de Blasio and president and CEO of the Community Service Society of New York, who supports the tax, said.

In October 2017, more than half of City Council members expressed support for the millionaires tax in a letter to the MTA.

And it has been implemented or is being considered in other cities and states.

In July 2017, Seattle passed a similar tax. There is also a “millionaires tax” ballot initiative in Massachusetts that would be used toward public transportation, repairing roads and bridges and other areas. Massachusetts voters will vote on it in November.

And New Jersey Gov. Phil Murphy recently proposed a $37.4 billion budget that would raise $1.5 billion in new tax revenue by upping taxes on the wealthy, legalizing marijuana and reinstating a recent cut to the state’s sales tax—money he would use to increase funding for the troubled NJ Transit and other areas.

Jones acknowledged the “stiff resistance” to the plan, particularly in the state Senate, and the adverse impact of President Donald Trump’s tax law but is still supportive.

“We still stand with the mayor [in] saying that it is time for individuals of great wealth in the city of New York to do a little bit more,” he continued.

Polly Trottenberg, an MTA board member and commissioner of the city’s Department of Transportation (DOT), told Observer the mayor believes wealthy New Yorkers can afford the tax increase.

“He has been on the progressive end of the political spectrum and [feels] like the highest-end taxpayers—particularly after the latest set of tax breaks in Washington—are the ones who can afford to contribute to the subway system and basically kind of feel the pain the least,” Trottenberg said, pointing to the amount of money the proposal would generate. “It would basically raise around $800-plus million a year, which even in New York is a pretty substantial amount of money.”

Still, she noted the mayor has expressed openness to a fee on for-hire vehicles.

“He thinks the equity considerations are fair and the revenue could be generated pretty quickly and go into the MTA’s work on the subways,” Trottenberg continued.

She said she wants a lockbox guarantee that funds will not be diverted. Funding, she suggested, could be used toward fixing tracks and signals, installing more elevators in stations and communication-based train control (CBTC).

“We feel very strongly that the city should have some voice in how the investments are made in the subway and transit system,” she added.

In its report, the Fix NYC panel recommends a first phase—which would begin this year—that starts investments to ameliorate transit connectivity between the central business district and the outer boroughs and suburbs.

The next phase, to roll out in 2019, suggests a $2 to $5 surcharge on taxi and for-hire vehicle trips in the district at the end of a 10-month period to allow transportation service companies to install GPS technology in vehicles. The final phase, in 2020, proposes charging drivers $11.52 in the most traffic-heavy parts of Manhattan and trucks $25.34.

That plan would raise $1.5 billion a year—75 percent for transit and the rest for roads and bridges. And as much as $15 billion could be raised if the money is bonded.

“No matter how we presented Move NY… the headline writers, the headline always come out, ‘Tolls on the East River bridges’ and that just rubs people the wrong way,” Schwartz recalled. “So the Fix NYC panel doesn’t put tolls on the bridges and still accomplishes… 85 percent of what it is, but you do lose some revenue and you do lose some additional traffic at the Brooklyn Bridge, but for the most part, it does most of what Move NY does.”

The Fix NYC plan, he said, deals with congestion and raises $1 billion for transit. He maintained that the MTA should decide how the funds are used for transit, roads and bridges but noted elected officials’ constituents will have a say, too.

The Move NY plan listed projects such as opening up four MetroNorth stations in the Bronx, the Triboro rail line that would extend from the Bronx to the Bay Ridge section of Brooklyn, station rehabilitation and extending the Second Avenue subway.

In London, which has had congestion pricing since 2003, more than 500 extra buses were put in service during peak hours before implementation of the plan, according to the Fix NYC report. Once congestion pricing went into effect, London saw a congestion reduction of 25 percent, with average speeds increasing by 30 percent.

Schwartz said the millionaires tax does not have a connection to transit or congestion issues and that while congestion pricing “stands a very good chance” in the 2019 legislative session.

“It is also closer to the Move NY plan than it is to the previous congestion plan… and that is a good thing because we think that the ideas around this issue have developed extensively… of really kind of figuring out what were the weaknesses of that plan from 10 years ago, what issues did it raise for the legislature,” Matthiessen said.

As to fair fares, he believes that at least some of the revenues from the Fix NYC plan should be allocated to it on a yearly basis. But he said there should be other funding sources to avoid taking money away from fixing the subway.

Jones noted a small number of individuals commute into areas below 60th Street or Manhattan “as to almost be laughable” and that the number is even lower for individuals below the poverty line.

“There are about 5,000 people would be impacted by congestion pricing who are poor,” he added. “Only about four percent of the general public… would overall be impacted but it would provide more than a billion dollars in support for the subway system, which is just extraordinarily important to working people of all classes.”

He pointed to other solutions such as lifting the cap on the gas tax and the value capture proposal that forms a special property tax district in the city to fund local transit projects—if the latter is “not done arbitrarily” or “superseding elected officials or localities.”

Let’s Put All Options on the Table

Veronica Vanterpool, an MTA board member and former executive director of the Tri-State Transportation Campaign, told Observer her criteria is that the new revenue source be sustainable, equitable and generate a significant amount of revenue.

“We don’t really know how much ‘enough’ [money] is because we don’t have a quantifiable number for what our system needs right now and so that point, all revenue sources that meet that criteria of long-term sustainable, equitable, I think, have to be considered and it’s not just one of them,” Vanterpool added. 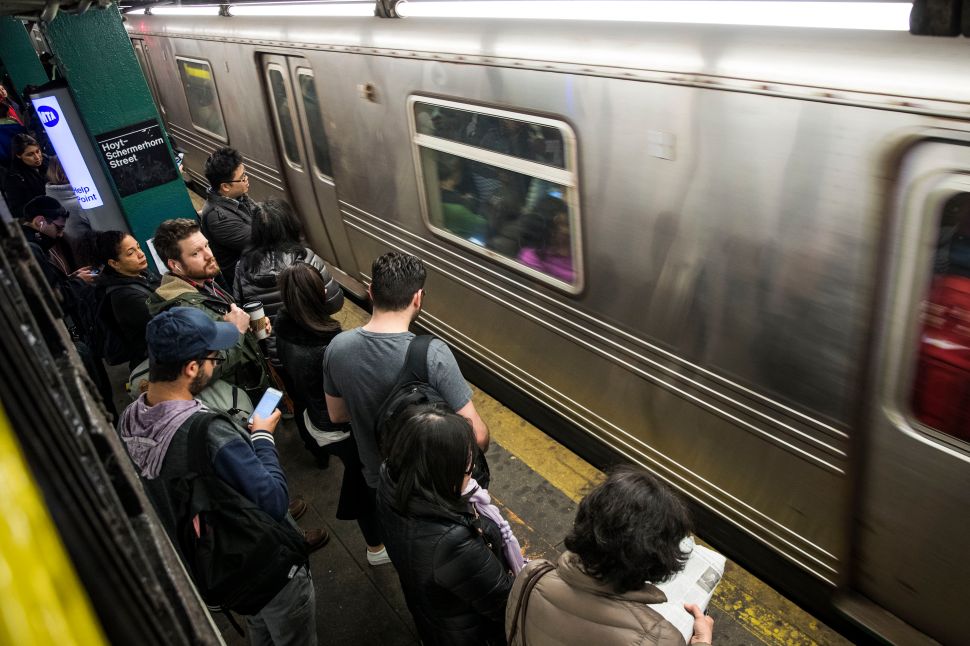