Fourteen guys and dolls populate the Runyonland of Three Wise Guys, now at the Beckett Theatre, but at the end—startlingly! —only seven actors show up for bows.

This is the final curtain call for The Actors Company Theatre (TACT)—a fitting one since it’s exiting with a cluster of solid, un-starry company members giving off sparks. After a quarter-century of commendable entertainment, TACT will call it a run on April 14.

Executive artistic director Scott Alan Evans stacked the deck to assure his company goes out in style—a style to which it’s become accustomed, as the artistic home for “at liberty” actors to hone their craft on neglected or rarely produced plays of merit.

The troupe’s latest, and last, outing is a rare original. It has been directed and (with Jeffrey Couchman) adapted by Evans from a couple of Christmas confections Damon Runyon wrote in the early ‘30s—Dancing Dan’s Christmas and The Three Wise Guys.

Three Wise Guys is Runyonese for the three wise men, here reimagined as a Broadway dandy, a bootlegger and a safecracker. On the lam from heat-packing creditors, they travel first to far away Great Neck, where they suit up as Santa and his auxiliary elves for a high-society orphan benefit, and then on to even farther away Pennsylvania, where the bootlegger’s ex-doll gives birth in a barn. Her husband just happens to be named Joseph—and there you have it: The Nativity, New Yawk-style.

TACT’s last cast fields these characters with some intense multi-tasking. The title players—Jeffrey C. Hawkins as Dancing Dan, Joel Jones as The Dutchman and Karl Kenzler as Blondy Swanson—stay put in their assigned roles, but everybody else has drawn double (Victoria Mack and Dana Smith-Croll), triple (Ron McClary) and even quadruple (John Plumpis) duty to play the colorful denizens they encounter.

All these characterizations were custom-tailored to the talents and strengths of specific TACT artists-in-residence. “That’s the joy of having a company,” said Evans. “I know what these actors can do, and I know how versatile they are. We just created this comedy with the company in mind. Our focus has always been actor-centric work. When we approach things, it’s from the actor’s point of view. We wanted a piece that’d give our actors a workout and showcase their talents.

“This company started with working actors who weren’t celebrities or, necessarily, names but were making their living. That’s something we’re proud of—providing work for actors who aren’t the movie or TV stars who get Broadway shows just because they have the recognition. We’ve used really talented actors to do roles they always wanted to do but couldn’t get cast in New York because they’re not names.”

Collaborator Couchman seconded that: “We wanted real people in this play—we didn’t want broad characters and stereotypes—so we tried to write them real, and this cast definitely brings that out. This is my first experience with TACT, and it was wonderful to see the way they work, so friendly and easy. They listen to each other.”

A movie-led playwright (his Battleship Potemkin musical got an airing at York Theater), Couchman jumped at a chance to uncork more of the unmistakable demi-mode patois that poured out of the Runyon Guys and Dolls. “We both just love his language, and we wanted to use not only his words, but, when we were creating our own lines, we wanted to create them in that distinct Runyon rhythm and cadence.”

This wasn’t easily arrived at since Runyon wrote little dialogue, forcing adapters to pull their dialogue out of his narration. “He was one of the most successful writers of his day,” Evans declared. “People loved his style of writing—that faux formality, always speaking in the present tense, the complete lack of contractions, his word invention, his underworld argot—but the difficulty adapters find with him is that the narrator is such an important voice, such a character, in these stories. Often, he’s an active participant who’s never identified so you know nothing about him or what his relationship is to other characters. But it’s a great voice, and it draws you to the writing. It drew us because that humor comes from that voice.”

“That narrator,” added Couchman, “maintains an ironic distance from brutal events. Violent stuff is being told in a funny sort of way, but, when you dramatize things, inevitably they get a bit heightened. You have to maintain a dry understatement within the dramatic form. We tried to find that balance between humor and danger.”

Couchman is also a movie-led historian. His book on a favorite flick, The Night of the Hunter: A Biography of a Film, caused The University of Tennessee Press to ask him to edit three volumes of scripts by film critic and screenwriter James Agee. Volume one, The African Queen and The Night of the Hunter: First and Final Screenplays, came out last year, tipping the scales at 899 pages. (“There’s a huge difference between Night scripts. The first is sprawling—Agee was so faithful to the book he wouldn’t leave any scene out—but the shooting script is a masterpiece of economy.”) Needing a rest from all the Agee angst, he tabled the next two volumes to frolic in Runyon’s world.

“I’d seen Scott’s production of Three Men on a Horse at TACT. It wasn’t Runyon, but it had a lot of Runyon qualities—gangsters, gamblers, horseracing—so I knew he had a feel for Runyon’s material and thought he’d be fun to work with. I was right.”

Evans decided last year that 25 years of playing Father Courage pulling the TACT wagon was enough. It was time to move on to other things—like writing and directing new plays, “which are not really TACT-focused, although we did some.”

Reviving the rarely revived has been the company’s specialty, and, in that singularly unique field, he has much to look back on and smile. “The play that always first comes to mind is one we did a decade ago, Arthur Miller’s Incident at Vichy. That was a great experience in so many ways—beautiful play, fantastic actors. I’m still very proud of that production. T. S. Eliot’s The Cocktail Party was a wonderful experience, and so was Happy Birthday, the play Anita Loos wrote for Helen Hayes.”

Occasionally, TACT mixed in with its regular troupers a dash of guest artists (most memorably, actors like Reed Birney, Kathryn Erbe, Jennifer Ehle and John Pankow).

Then there are the backstage and administrative people who’ve made TACT what it’s become over the years, Evans pointed out. “I certainly have to acknowledge Cynthia Harris, who is a huge part of it and was artistic director for 21 years. She did great work on stage and was a real leader off stage. This company wouldn’t be the same without her. Simon Jones, also, was an artistic director for several years—and Jenn Thompson. There’ve been a lot of people. It’s been a real collaborative effort.”

Jones, who can be found these days on Broadway in Farinelli and the King, was understandably melancholy about TACT’s demise. “It’s awfully sad that an actor-run company won’t be going on,” he said. “Actors would go out of town, and, when they came back, they still had a home. What we will really miss is the community.

“I’ll miss suddenly remembering, ‘Yes, I did that play, and I played that part.’ We did that play by Graham Greene, The Potting Shed, and Edward, My Son by Robert Morley. There are so many more we could have done. The whole point of TACT was we did plays people, otherwise, wouldn’t get to see. That was an attraction for the audience. We had very loyal subscribers. They loved the shows and really came. They’d say, ‘Oh, it’s the best thing you’ve done so far’—after every play that we did.”

Once Three Wise Guys closes on April 14, two events remain on the agenda—a pair of gender-splitting company readings in TACT’s Salon Series at its headquarters, 900 Broadway: for the guys, Neil Simon’s Laughter on the 23rd Floor (April 21-24), and for the dolls, Edna Ferber and George S. Kaufman’s Stage Door (May 19-22).

Then, the rest is silence… 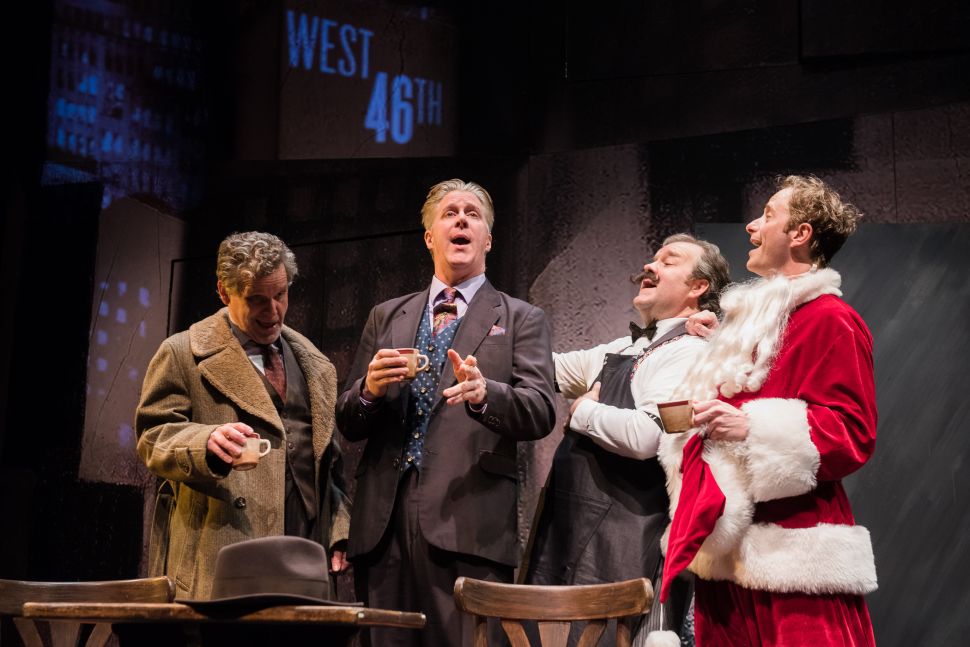