Yesterday, ousted Metropolitan Opera conductor James Levine filed suit against his erstwhile artistic home, claiming that his dismissal for sexual misconduct was only a smokescreen for a “longstanding personal campaign to force Levine out of the Met.” The lawsuit, demanding more than $5 million in damages, sets up the antagonists for a protracted and messy court fight.

Yet that may not have been the worst news out of the Met last night. A catastrophic new production of Mozart’s Così Fan Tutte was so dreadful on so many levels, one was left wondering why we even bother to care about the company in the first place.

This comic opera is something of a hothouse flower, which perhaps explains why it wasn’t until well into the 20th century that it took its place in the opera house along side such Mozart perennials as Le Nozze di Figaro and Don Giovanni. Beginning as a positively frothy farce, the piece veers into a much darker tone in the second act, right to the edge of tragedy. (Some critics would argue it goes over that edge and never really turns funny again.)

Even the title is ambiguous: “Così fan tutte” doesn’t translate word-for-word into English, but an approximation might be “Chicks all do like that.” That’s the cynical and misogynistic attitude of the character Don Alfonso, who bets two young friends that their fiancées will cheat on them at the earliest opportunity. But it turns out Alfonso is right: in less than 24 hours the girls are ready to jump into bed with a couple of exotic foreigners they just met. (That the “foreigners” are actually their boyfriends in disguise is maybe just a technicality.)

On the other hand, a modern audience is left wondering what kind of sicko would deliberately set up his girlfriend to cheat, all for the sake of winning some stupid bet about whether she’s a saint or just a bitch like all the others. So let’s just say that presenting this piece dramatically (to say nothing for the moment about its immense musical demands) requires a deft surgical touch. At the Met, though, director Phelim McDermott flings around a sledgehammer, at times so carelessly it flies from his hands.

He updates the setting from 18th century (that is, for Mozart, contemporary) Naples to Coney Island in what looks to be the early 1960s. The sisters Fiordiligi and Dorabella are gawky bobby-soxers, and their lovers are first seen as Naval officers and later return in peculiar Carny outfits that make them look like they’ve both got callbacks for Billy Bigelow. Don Alfonso and his sidekick, the wisecracking maid Despina, seem to have access to a costume shop with time-travel capabilities, providing a disco leisure suit for her and candy-apple red Liza Minnelli drag for him.

Surrounding them are a platoon of midway performers: sword-swallowers, a fire-eater, a bearded lady and so forth. These players move the sets around and do their turns with grace, but McDermott leans on them far too much, even turning the ravishing overture to the opera into a sort of background soundtrack for their stunts.

Of regret, guilt, shame or (most to the point) reconciliation there is not even a hint here, and the nonstop vaudeville on stage seems to rob even the music of its depth. Or maybe the problem was this gorgeous score was performed so ineptly, sung poorly for the most part and played as if conductor David Robertson and the orchestra had never met before last night.

There were a few bright spots—or let’s say “not quite so Stygian spots”—amid the gloom: mezzo Serena Malfi’s sultry tone and lively, expressive face as Dorabella; the bright, easy tenor of Ben Bliss as Ferrando; the savvy stage presence of Christopher Maltman’s Don Alfonso. As Despina, Broadway’s Kelli O’Hara flaunted a solid lyric soprano if hardly a glint of the expected brass in her portrayal.

But mostly these qualities were obscured by sloppy rhythms and one-speed, uninflected singing. By far the most heinous of the soloists was soprano Amanda Majeski in the virtuoso prima donna role of Fiordiligi. Her acrid and pitch-free warbling should disqualify her from attempting this part at the Met. In fact, if Thursday night’s performance is an accurate depiction of her current vocal state, she probably shouldn’t be singing in public just now.

I don’t have anything on paper, but I assume that sometime in the planning process, this Così was to have been led by Levine. (It is supposed to be one of his favorite operas.) Once he hears how violently this project has gone astray, though, I wouldn’t be surprised to hear that the embittered maestro was indulging in his fair share of Schadenfreude. 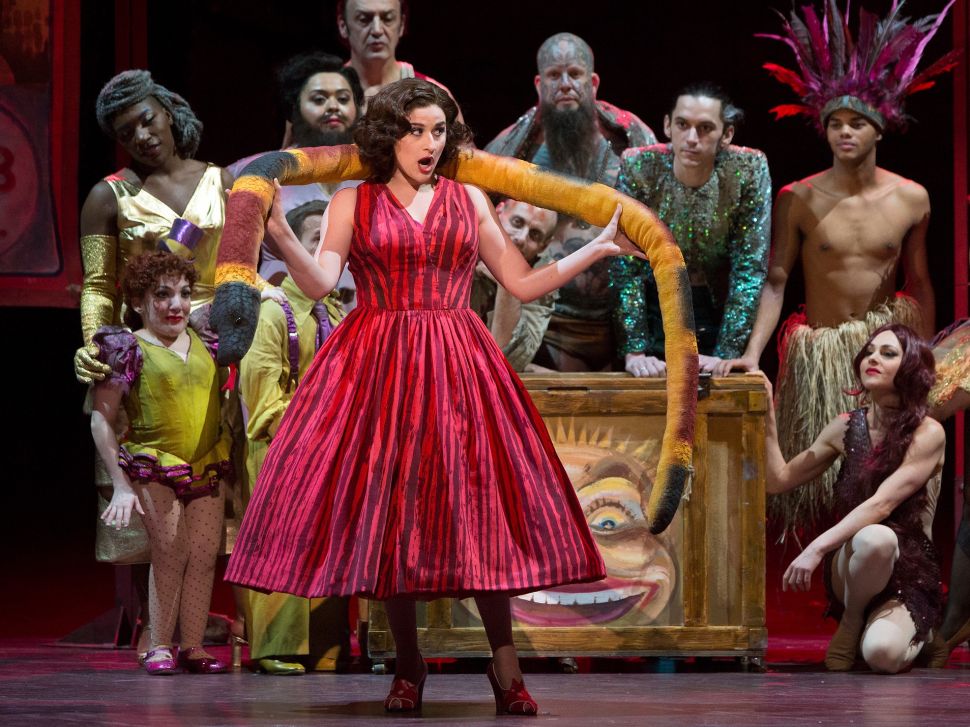