“The last time I won an award, I somehow, accidentally, ended up running for President,” Oprah Winfrey joked to a crowd of Museum of Modern Art supporters at the Ziegfeld theater ballroom on Tuesday afternoon. “So, I’m going to choose my words very carefully today.”

While sidestepping the topic of Winfrey 2020, the beloved talk show host and A Wrinkle in Time actress, was back on the podium to accept the 22nd Annual David Rockefeller Award this Tuesday afternoon.

Named in honor of the iconic American philanthropist, this award is presented “to an individual from the business community who exemplifies enlightened generosity and effective advocacy of civic and cultural endeavors.”

According to Marie-Josée Kravis, President of the Board of MoMA, Winfrey is, “in all the ways that matter, a Rockefeller.” But Winfrey was only the second woman, ever, to receive this award.

The only other woman who received the award was The Washington Post owner Katherine Graham, who collected the accolade in 2014. Perhaps her name sounds familiar? That’s because Meryl Streep recently played her in the Oscar-nominated film, The Post. Graham’s daughter, Lally Weymouth, was in attendance for this year’s event.

Tickets for the luncheon started at $2,500 and this year’s event succeeded in raising over $3.4 million for the museum’s Department of Education, which offers far-reaching programs for families, adults, community organizations and school groups, at little to no cost.

This programming offers a myriad of classes for people with disabilities, including Touch Tours, a class that allows visually impaired visitors to touch works of art in order to access and appreciate them. Another course, created by Education programmer Francesca Rosenberg, provides an interactive gallery tour for people with dementia and their care partners. There are classes for teenagers, toddlers, families, fashionistas, film buffs and tech geeks and even a support group type gathering for older adults who have recently lost a partner.

In Kravis’ introduction to the luncheon, she touched upon the stark differences between Winfrey and Rockefeller; he was born into a privileged family on the Upper East Side, while she was raised poor in Mississippi. However, their similarities can’t be denied.

“Even if they came from very different directions, they both learned that giving entailed engaging and involving yourself with the causes you support,” Kravis said. They both have an insatiable curiosity, a love of books and people, and “most important…their gift of kindness.” And who could forget, their interest in the arts.

Winfrey’s poignant speech reflected on her desire to be “a patron of the arts” back when she was just starting out as a young TV reporter. Unable to afford anything but postcards, she splurged on frames and hung the cards proudly in her first apartment. Later, when she’d made enough money to rival a Rockefeller, she began to buy in earnest.

One of the most important early pieces she bought was sold at auction at Sotheby’s 30 years ago. She was (quite ironically), the highest bidder on a Harry Herman Roseland painting called, “To the Highest Bidder.” Painted in 1904, the work depicts a little girl clinging to her young mother, before they’re about to be sold separately at a slave auction.

“It remains the most personal piece that I own,” she told a rapt audience. Given a day to think about what she wanted to save from her home during the recent wildfires in Santa Barbara, she immediately chose the painting, telling staff to “carry it on their back” if they had to, in order to save it. “I knew of course we had to remove the Klimt, the Gaugin, the Monet and the Degas and the Hopper to higher ground,” she said, “but it was this painting, the least expensive, that meant the most to me.”

“Sometimes, late at night…when the house is quiet, I curl up on the sofa in my pajamas and my socks, and will just be with them for a while,” she said of the two women in the painting.

While deftly avoiding politics, Winfrey didn’t shy away from hinting at the current climate. “At a moment when our culture is clashing on a daily basis, art actually has the power to cut through the barbed wire of our fences, and show us something we’ve never seen before,” she told the crowd. “Art can sometimes, actually remind us who we are, suggest the possibility that there is something more and there is something better. It illuminates our collective soul.”

After posing for pictures with her many admirers, it was time for Winfrey to leave. But she wasn’t going far; she was due downstairs to meet with another living legend in art and philanthropy, MoMA President Emerita, Agnes Gund. Winfrey and Gund are hoping to do an event together in 2019, though the details have yet to be announced.

Typically, at events like this, the crowd parts quickly, returning to their desks at investment houses, cultural institutions, PR firms and newsrooms. Yet people lingered until almost 3 p.m. One of the last people to depart was Kravis. “She always stays until the end, to thank everyone on the staff,” a MoMA staffer told Observer. “That’s what makes MoMA so special. Everyone feels appreciated. It really is like a family.” 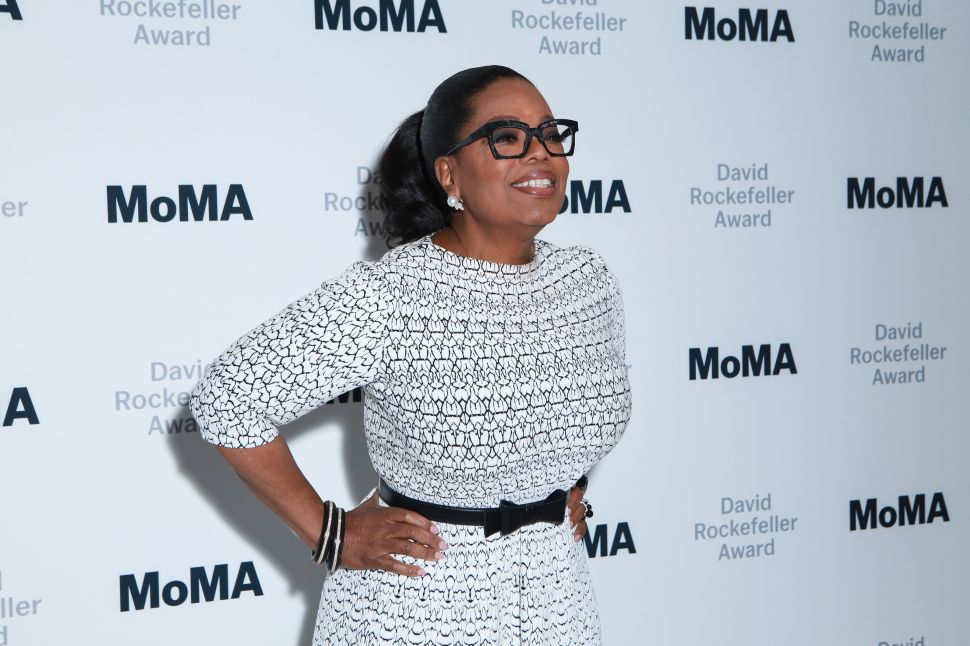