The first few stars to hit the Oscars red carpet aren’t usually those with the brightest star wattage, but this year was a little different.

Early on in the evening, Olympic figure skater and Twitter’s favorite athlete Adam Rippon ruffled feathers when he stepped out in a sexy black tie suit from Moschino. Yes, that’s a thing. The classic staple featured leather harness details and cutouts on the shoulders. Rippon posed on the carpet alongside fellow American figure skater, Mirai Nagasu, who donned a periwinkle gown from Tadashi Shoji that featured touches of tulle, some sheer paneling and plenty of crystal embellishments. It was exactly what you’d expect a figure skater to choose for a red carpet affair.

And strangely, she wasn’t the only one to opt for a dress that felt pretty similar to something that could be easily adapted into a leotard and a tulle skirt for a spin on the ice.

Take, for example, Salma Hayek who selected a lilac Gucci number, that had layer upon layer of flouncy fabric and a careful drape of crystals. It was the type of dress that would look absolutely mesmerizing during a triple lutz.

Who else was ready to skate? Mary J. Blige, who slipped into a shimmering white bodice with a one-shouldered top—that just so happened to end in a full-length gown. Of course I Tonya‘s Margot Robbie got in on the action. Yes, she skated in the film that garnered her a nomination this year for best actress, but her white Chanel Couture number, with a delicate crystal off-the-shoulder garland, looked as if it were made for an ice queen.

Sometimes, it was the smallest detail that evoked a skater’s vibe, like Zendaya‘s slicked back bun that could withstand a triple axel or the neckline and super precise bodice of Jennifer Garner’s electric blue Atelier Versace frock. Even Emma Stone’s Louis Vuitton suit jacket was made for ice dancing, thanks in part to the shiny oxblood velvet, super formfitting shape and very deep V-neck.

But wait, what about Johnny Weir and Tara Lipinski? Don’t worry, we’re sure they would have plenty of snarky comments regarding Taraji P. Henson’s sheer shoulder panels and dramatic tulle sleeves. 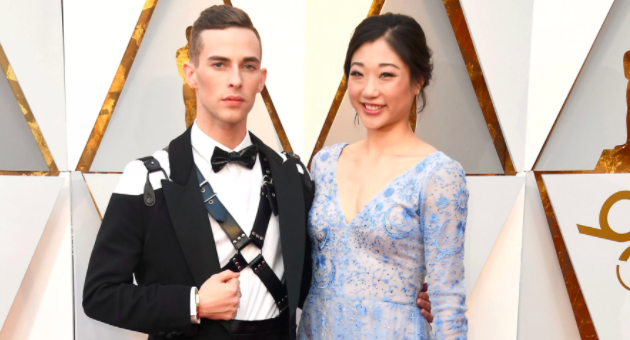