Traveling up the Acela corridor, fresh off the heels of this week’s American Israel Public Affairs Committee (AIPAC) conference in Washington, D.C., the pro-Israel lobbying tsunami thundered into Manhattan on Thursday evening.

The sixth annual World Values Network Champions of Jewish Values Awards Gala transformed the Plaza Hotel into a rambunctious playpen of Jewish iconoclasts, D-list celebrities and Trump-affiliated powerbrokers. But underneath the night’s glaze of plastic surgery and ill-received Bill Cosby jokes clenched the mighty fist of Zionism, emboldened amid a renaissance of U.S. policy favoring Israel.

As attendees funneled up the Plaza’s stairs to the gala’s reception, chefs served technicolor trays of sushi stacked horizontally. The towers aligned with snippets of dead fish were so elegant that the crowd hesitated to eat, opting instead to enjoy the food from behind their smartphones.

Though the beginnings of the Jewish Values Award Gala promised sophistication, especially with the introduction of prime rib and chicken satay hors d’oeuvres served alongside peanut dipping sauce, the evening descended into a Trumpian spectacle once the “celebrities” arrived.

Despite choosing unidentified sushi over gawking at the arrival of Mnuchin and D-listers, attendees in the reception room were herded by security wearing Star of David pins. In a cavernous room down the Plaza’s stairs of imported Italian marble, a pre-recorded video played showed Israel Prime Minister Benjamin Netanyahu being presented with the prestigious “Elie Wiesel” award, honoring the prime minster’s late brother, Yoanatan—who was killed in the line of duty in Israel’s famous 1976 Entebbe rescue. Moved by the symbolism, a pixelated Netanyahu weeped.

Speakers and honorees praised the Taylor Force Act—U.S. legislation that will defund the Palestinian Authority, a self-governing Palestinian organization accused of supporting terrorist networks. The policy initiative also saw heavy support from Republican and Democratic lawmakers this week at AIPAC and was touted throughout Thursday’s gala as a necessity for the continued survival of Israel.

“American taxpayers will no longer send money to fund the death of innocents!” a speaker boomed to light applause.

“An extraordinary surrender lies in the graveyard,” another honoree solemnly reflected as a thirtysomething guest played on her phone.

Zionist rhetoric and clumsy organizational efforts culminated in the main dinner. Corralled into the Plaza’s grand ballroom by security guards yelling into microphones, guests stood for the U.S. and Israel national anthems before sitting through video montages, a live auction and an opening standup bit laced with a Bill Cosby joke.

“This is what stands between us and food,” grumbled my plus one, as organizers auctioned off a backstage tour of The View with a starting bid of $2,000.

Unlike the initial sushi and hors d’oeuvre offerings, the dinner featured unpalatable plates of roast beef and breaded chicken steak. A source inside the restaurant industry who spoke only on the condition of anonymity confirmed this was because chefs at institutions like the Plaza prepare dishes appealing to the palates of the elderly (read: those with the most power), which favor salt over tenderness.

Onstage, Miss Israel Adar Gandelsman was honored as video footage showed her wielding semi-automatic rifles—besides modeling, she serves in the Israeli Defense Forces. Mnuchin bid on a glatt kosher meal prepared in his home by a chef from Rao’s, while Jenner bid on a lunch with Michael Steinhardt; per Bloomberg, both sat at the same table as Spicer.

Touting the Trump administration’s recent tariffs on aluminum and steel imports, while subtly plugging his role as a member of the National Security Council, the treasury secretary received an award named after Sheldon Adelson—the Republican megadonor who funneled millions of dollars into President Donald Trump’s campaign. Having presided over the tariffs’ signing in Washington, D.C. earlier that day, guests speculated that Mnuchin had traveled to New York via private jet.

But it was Jenner’s keynote address marrying the values of Israel and the LBGT community that received the loudest applause.

“In a region where entire religions are banned, women are persecuted, gay men are sentenced to death, Israel is a long-standing refuge for the LGBT people,” exclaimed the activist as a member of the nouveau riche seated at the table next to mine played loud videos from a smartphone.

After Congressman DeSantis and Ambassador Dani Dayan further praised the Taylor Force Act, guests emptied the ballroom. In the foyer, old men crowded Miss Israel for selfies as Spicer and others breezed between photo-ops. 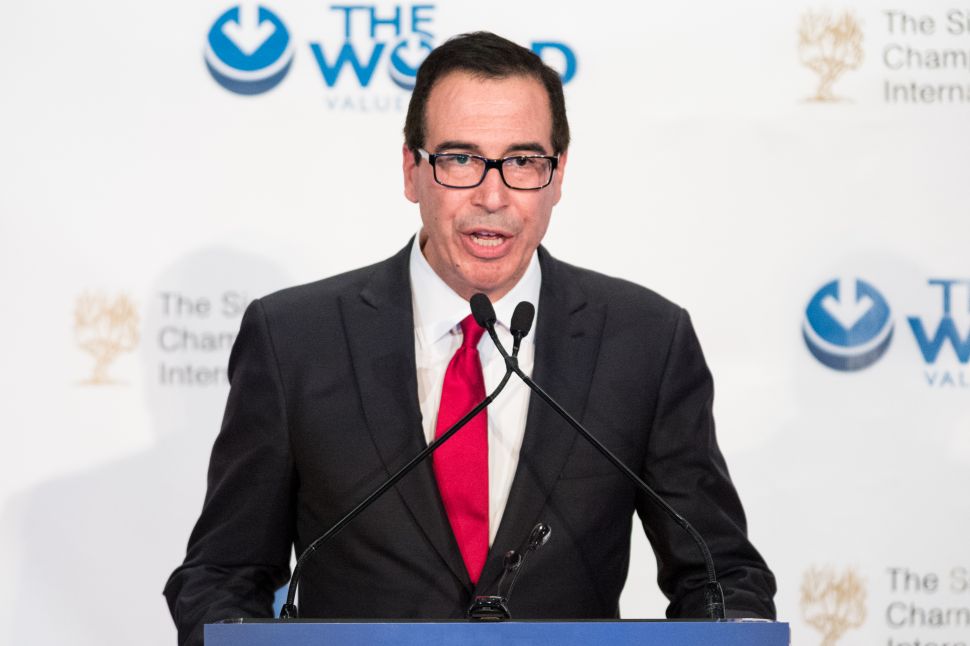