The Western world loves Andrei Sakharov, a famous Soviet dissident. Where the Soviet Embassy in Washington, D.C. once was, there is now Sakharov Plaza.

Sakharov Squares can be found in cities all over the world, and the European Parliament established the Sakharov Prize for Freedom of Thought in 1988. It has a monetary award of 50,000 euros and has been given to people like Nelson Mandela, Aung San Suu Kyi, Ibrahim Rugova, Kofi Annan and Malala Yousafzai and to organizations like Ladies in White of Cuba, Democratic Opposition of Venezuela and Reporters Without Borders.

The American Physical Society has its own Andrei Sakharov Prize, which is given for “outstanding leadership and/or achievements of scientists in upholding human rights.”

The Sakharov Center in downtown Moscow keeps the memory of the country’s most famous dissident alive, and the long and wide Sakharov Prospect, a street in the Russian capital, became known worldwide for a massive anti-Putin demonstration that took place there in 2011.

Vladimir Putin’s Kremlin not only tolerates but strives to keep the memory of Andrei Sakharov alive because he created the Soviet thermonuclear bomb—which was built to one day be used against the U.S.

He, like Leonardo da Vinci, also had other ideas in the sphere of arms inventions that preceded his time. And now, Moscow says, their time has come.

During Putin’s last address to the Federal Assembly in Moscow on March 1, the Russian president unveiled shocking new weapons that will soon be available to the Russian military, including high-speed underwater drones capable of carrying a nuclear warhead that can target both aircraft carriers and coastal facilities of the United States.

“You have failed to contain Russia,” Putin said, addressing Washington’s plans to build the Missile Defense Shield in Europe, which the Kremlin believes is directed against Russia. “You did not want to listen to us before, so listen now.”

The question at the center of the report was, “What exactly did ‘the great humanist’ Andrei Sakharov invent that was used in the new ‘products’ demonstrated by Vladimir Putin?”

The answer? A warhead for giant underwater drones—a torpedo that would deliver a charge of 100 megatons to America’s shores.

Indeed, in his memoirs, Andrei Sakharov wrote, “I decided that such a carrier [for the nuclear charge] could be a large torpedo launched from a submarine. I fantasized that it would be possible to design a straight-through -vapor nuclear jet engine for such a torpedo. The goal of the attack from a distance of several hundred kilometers should be the enemy’s seaports. The hull of such a torpedo can be made very strong so that it does not fear mines or fence networks. Of course, the destruction of seaports, as a result of the surface explosion of a torpedo with a 100-megaton [nuclear] charge and as a result of underwater explosion, inevitably involves very large human casualties.”

Andrei Sakharov’s idea was a series of powerful explosions along the U.S. coastline that would provoke a giant killer wave. This secret Soviet project was called T-15.

Last week’s mentioning by the Russian television program was not the only time in recent history that Andrei Sakharov’s name was used to justify Russia’s production of “asymmetrical” weapons and relatively cheap answers to the new arms race Russia believes the U.S. has been trying to use as a means of bankrupting the country.

A week before Putin’s bellicose speech, the Russian television show used the death of prominent Soviet diplomat and politician Valentin Falin to broadcast an interview he gave in 2011 in which he argued for Andrei Sakharov’s solution to the arms race.

“Sakharov, Andrei Dmitrievich, he offered to make an amount of 100-megaton bombs, to place them along the West and East coasts of the United States—offshore, in the oceans, Atlantic and Pacific—and if Americans would start the war, to explode them, and there would be a wave of 40 to 60 meters high that would wash away the United States. All other scientists—Kapitsa, Tamm and others—were saying to him, ‘What? How can you even offer this, Andrei?’ But he [was saying] that Americans were going to bankrupt us with this arms race.”

During his long career, Falin worked under Soviet leaders from Stalin to Gorbachev and was the Soviet ambassador to Germany in the 1970s.

Like Putin today, Falin—before his break-up with Nikita Khrushchev in 1961—was against accepting the rules of the arms race and preferred asymmetrical responses.

Another one of Sakharov’s ideas was to start a preventive war against the United States with the use of a dirty mega-bomb.

According to Sakharov’s design, a specially constructed ship, built of cobalt-59 with a conventional atomic charge inside, would play the role of the so-called “cobalt bomb.” After the explosion of the charge, the neutrons would bombard the cobalt shell of the ship, which would turn into an extremely radioactive cobalt-60, contaminating the surrounding territory.

“Such a ship could be camouflaged as the usual ‘merchant’ and placed, say, on the horizon of the New York harbor. Coastal cities would simply be depopulated. While the half-life of cobalt-60 is short—about five and a half years—afterward, it is possible to live in the affected area,” reported Vedomosti, a Russian newspaper, in an article titled “Top-Secret Project ‘Status-6’ Resembles Academician Sakharov’s Idea.”

Vedomosti‘s story appeared after the blueprints of the underwater nuclear torpedo drone were leaked and shown on Russian television in 2015.

“The nuclear torpedoes, to be fired by submarines, would create ‘zones of extensive radioactive contamination making them unsuitable for military or economic activity for a long period,’ says the [leaked] document, which is clearly visible in the footage for several seconds,” The Guardian reported at the time.

“Back then, under Sakharov, this project, T-15, was not realized, because it was not possible to create a compact nuclear reactor as an engine for the ‘tsar-torpedo.’ Now, these technical problems have been solved,” Vesti Nedeli, the Russian television program, triumphantly reported on March 4, 2018.

Putin announced the successful completion of this drone in his speech. He says it will be a perfect weapon of retaliation in case the U.S. dares to launch a preventive nuclear strike on Russia.

“Why do we need a world in which there is no Russia?” Putin asked during an interview for a film about him called World Order 2018. 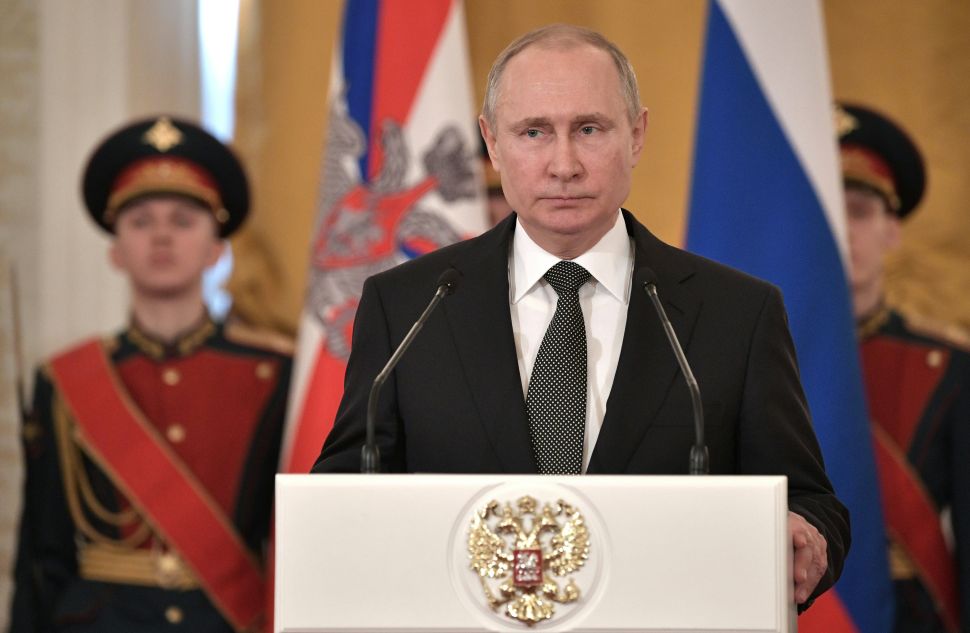