Meghan Markle is now officially part of the royal family, and it’s not just because she donned her own American version of a fascinator. She made her official public debut alongside Queen Elizabeth, her future grandmother-in-law.

Markle joined the most important members of the royal family for a church service today, in celebration of Commonwealth Day. Queen Elizabeth has been the Head of the Commonwealth throughout her reign, which is composed of 53 countries. Today is the largest interfaith gathering in all of the United Kingdom, with representatives from each country.

Of course, Prince Harry was in on the action, as well as Prince Charles, his wife Camilla, Prince William and Kate Middleton. One surprising addition was One Direction’s least famous member, Liam Payne, who performed at the Westminster Abbey service. Prince Harry was caught giving him some side eye when he sang. Perhaps he was hoping for Harry Styles.

Markle wore a cream coat that costs over $1,000 and, shockingly, has not sold out quite yet. She paired the coat with a beret-esque fascinator, courtesy of Stephen Jones Millinery. It was far more subdued than the usual royal headgear, especially if you’ve ever spotted Princess Eugenie literally anywhere.

Kate Middleton wore a navy coat, which made some people wonder if she’s hinting at the gender of her future child. Her more traditional hat was courtesy of Lock and Co. And while Middleton and Markle didn’t have another twinning moment, their feet did. Both wore navy pumps, which led some to wonder if they wore matching kicks on purpose.

Some great detail on the Queen’s hat today – What do you think? #Queen #hat #miliner #royal @gettyentertainment @gettyimages @theroyalfamily #commonwealth

Queen Elizabeth might have won for most elaborate headwear, though, donning a fascinator decorated with maroon flowers. Her hat even impressed Getty’s royal photographer, Chris Jackson, who captured it in all its glory.

If you’re wondering why it seems like the royals are always wearing inventive toppers, it’s because it’s an actual royal rule.; they’re required to cover their heads for official events and in the evening. Markle’s early adoption of the rule shows she’s already embracing her princess lessons.

Appearing with the Queen was a big step for the former actress. Kate Middleton didn’t attend any official events with Queen Elizabeth before her wedding, but she doesn’t appear to be jealous—at least not yet. 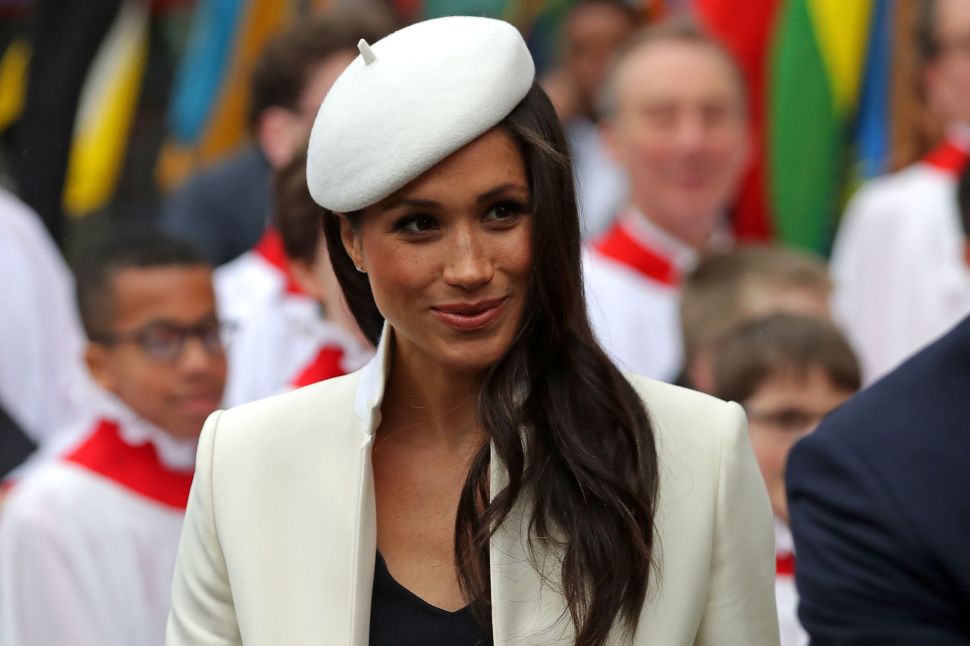