A fresh and valiant attempt to breathe some fresh air into the #MeToo movement, Submission is stimulating and intelligently rendered until the final act, when predictability sets in. A shame, really, because up to a point it’s one of the most captivating, intelligently written, and sensitively acted films in recent memory, with a powerful performance by Stanley Tucci as understated as it is galvanizing.

This famously versatile actor, always different in each role, has never been better, and with his horn-rim glasses and becoming Cary Grant hairpiece, he’s never looked better, either. He plays Ted Swenson, a novelist with one moderately successful book in his past, who takes on a teaching job at a small college in Vermont. He thought it was a gap-filler between literary accomplishments, but ten years later, his indifferent wife Sherrie (Kyra Sedgwick) has become a highly regarded local doctor, their daughter is away at college, and Professor Swenson has made reluctant peace with mediocre writing students and his own writer’s block. The morbid, sexually obsessed fiction read aloud in class while he tries to stay awake has slowly replaced the elusive fame, money and creative ambition in his own life. Now he drinks too much, attends too many stuffy faculty dinners, and despises his daily routine.

There is one exception: a lovely pupil, Angela Argo (Addison Timlin), who unexpectedly shows enough real talent to awaken his passion, in more ways than one. Admiring her teacher to the point of hero worship (she tells him he’s the greatest writer since Stendahl, which is little more than an ego massage, but he falls for it), she begins to share the chapters of a book she’s secretly working on, a first novel called Eggs that revives his enthusiasm for new, youthful writing that is original and provocative.

The more he reads, the more impressed he becomes, and an obvious sexual attraction grows. He’s so enamored by her narrative that he even begins to project himself into the erotic passages, too unsophisticated to question how she knows so much about sex. Thrilled by her ability, flattered by her attention and anxious to help her career blossom, he unwisely devotes so much time to one-on-one private advice and after-hours editing that he even drives her to another town to buy a new laptop computer. Helping her install her new device in the privacy of her dorm room, he’s too naive to realize her gratitude is only part of a diabolical plan to seduce him.

Like a middle-aged puppy that was never spayed, he responds to her sexual aggression. The assignation fails, but it’s too late. Wheels of resentment are already forming in her scheming little head. When an attempt to submit her manuscript to his own New York editor (Peter Gallagher) fails, Swenson’s prize pupil charges him with sexual harassment and retaliates in ways that are shocking and up to the moment in social and political relevance.

My problems with Submission begin here: All the lonely, aroused professor is guilty of is naiveté and reacting to an aggressive student he believes in with inappropriate behavior. But nobody believes his innocence. Everyone turns on him. His friends from all those wasted nights of faculty dinners reject him. In the anger, resentment and confusion that follow, his career is destroyed, his reputation is smashed, his wife and daughter leave him, his future is ruined, and the ultimate irony? His editor publishes the girl’s novel anyway. Too much punishment for such a small, uneventful transgression, if you ask me.

Meanwhile, there are several reasons why Submission remains a seriously considered film brimming with ideas worth examining. It proves women are not the only victims of the bloated, often inadequately investigated charges of abuse and harassment aimed exclusively toward men. Temperamentally and intellectually, it cannot be denied that this is a man who orchestrates his own downfall, but it’s the girl who finishes him off, for all the wrong reasons.

Novel, bracing ideas with an unfamiliar sting are hallmarks of director-screenwriter Richard Levine, who helmed and executive produced seven seasons of the hit TV series Nip/Tuck, which I still consider essential viewing even in reruns. Until he stacks the cards against his protagonist to the point that even his attempt to tell his side of the story falls on deaf ears, Levine nearly pulls off something daring. I like the way he works in parallels to the Marlene Dietrich classic The Blue Angel. I admire the way he fuses every scene with dialogue that sounds and feels like real people do. And above all, I was floored by Stanley Tucci’s multi-layered performance, moving and spot-on as both predator and prey, and the way he accepts the consequences—not of wrongdoing, but of his human weakness—and moves on.

Submission doesn’t spell perfection (what movie does?) but with so much meat to chew on and insight to think about, it’s weighty and memorable anyway. 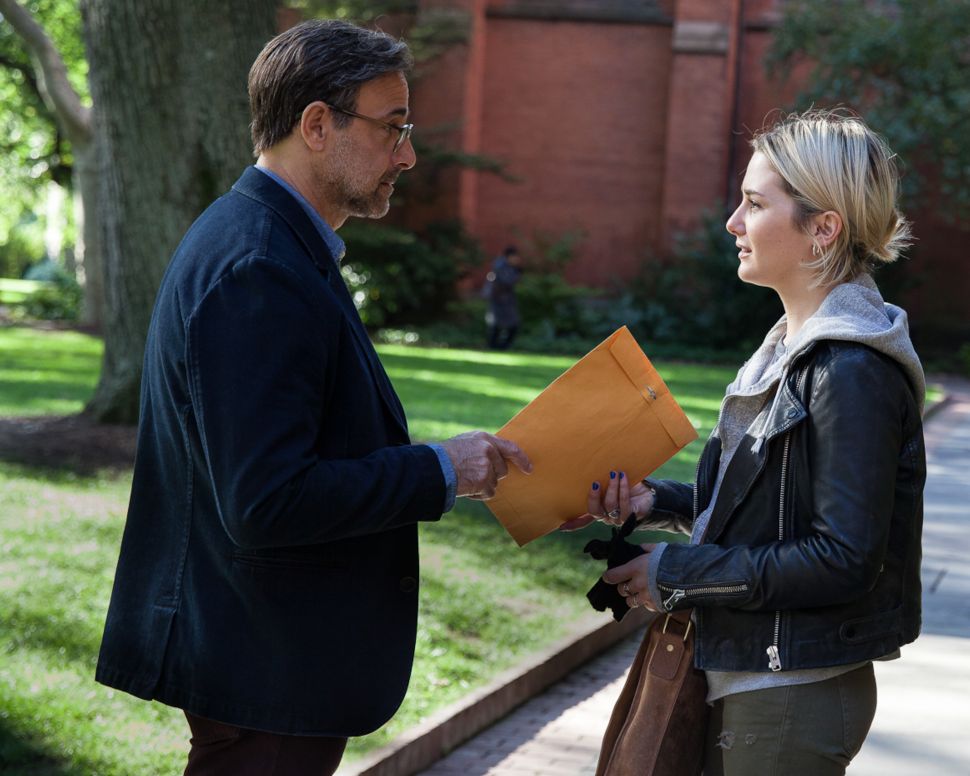