Four years ago this week, I coined the term Cold War 2.0 to describe the deteriorating diplomatic and military situation between Russia and the West in the aftermath of the Kremlin’s dramatic seizure of Crimea. It was obvious to anyone who wished to see that a period of renewed conflict had arrived—because Moscow sought it. It wasn’t a repeat of the last Cold War, rather a reborn rivalry that promised to be even more unpredictable the second time. I concluded my assessment:

The West will prevail in this Cold War too because Putin’s corruption-laden model for Russia is unsustainable in the long run. In terms of population and per capita GDP, Russia is more or less Mexico with nuclear weapons. We are not headed for a bipolar world again, but a multipolar one where Russia can be a dangerous spoiler. But NATO, with American leadership, needs to wake up.

However, many people did not wish to wake up just yet, so my announcement of Cold War 2.0’s arrival was met with criticism that I was alarmist and overly worried about Russian President Vladimir Putin and the retinue of rough men around him, mainly Chekists like himself. I know something about Chekists—and Russians—so I understood that the Kremlin wasn’t going to stop its increasingly aggressive provocations unless it was forced to.

The last four years have witnessed Moscow’s march, real and virtual, on one Western institution after another. Above all, Putin’s Special War against the West—an unpleasant amalgam of espionage, propaganda, subversion and cyberattacks—has wrought havoc at minimal cost to Moscow. The Russian effort to create mayhem in America’s 2016 election surely succeeded beyond the Kremlin’s wildest hopes, while Britain’s recent Skripal case, an audacious attack with a military-grade nerve agent, demonstrates that Moscow’s spies aren’t beholden to any gentlemanly rules from the last Cold War.

Nevertheless, reality has intruded, slowly, and it’s now de rigeur to concede that a new Cold War has arrived. Mainstream pundits have joined the bandwagon, finally. In the New Statesman, Sir Lawrence Freedman, the eminent British strategist, concedes that Cold War 2.0 is here (without noting the term’s origin), and provides a walk-through of all the ways that the new conflict is dissimilar from the last one. Freedman’s points are accurate, indeed I’ve been making most of them for years. Yet one key omission is telling. As he explains:

Moscow can no longer claim leadership of an international ideological movement. There are some old leftists who still find it hard to think of Moscow as anything other than a leader in the struggle against global capitalism and imperialism. Its main messages, however, are now crudely nationalist, and so its natural supporters are on the xenophobic right—figures such as Nigel Farage, Marine Le Pen and Viktor Orbán. Russian sympathizers are now most likely to be found among misogynistic, racist and homophobic parties and movements.

To be fair, President Barack Obama said similar things, disavowing any notion that the new Cold War possesses any sort of ideological dimension, as the last one did so vibrantly, with a clear line between the capitalist West and the communist East. However, as I’ve explained before, there is indeed an ideological component to Moscow’s side in Cold War 2.0—and prominent Russians talk about it all the time. Yet most Westerners, including a commanding majority of pundits and scholars, never take notice of it.

This is because they are irredeemably WEIRD, to cite the social science acronym for Western, Educated, Industrialized, Rich and Democratic. I explained this four years ago, when I noted that Putin had placed himself at the head of an “Anti-WEIRD Coalition,” which was loose and broad, appealing to diverse people from many places who have yet to find a happy home in the post-modern Western orbit. As I elaborated:

In the last several decades many Americans, and essentially all our elites, have internalized a worldview based on affluence, individualism and secularism that makes us unique, globally speaking. So much so that we seem unable to comprehend that there actually are opposing viewpoints out there.

Our WEIRD elites accepted over a quarter-century ago that the future of the world was like them: democratic, liberated, secular and consumerist, and no other viable models existed. That history had therefore ended seemed like a statement of fact rather than a mere wish. The conduct of Russia—and China too—in recent years demonstrate that this post-modern Western conceit was a hope rather than a plan.

Putin’s Russia embraces an aggressive nationalism that is grounded in revanchism left over from the last Cold War and the Soviet collapse. Its roots, a potent admixture of Slavophilia and militant Orthodox Christianity, appear strange and incomprehensible to the West today yet are deeply plausible to many Russians, since they are grounded in centuries of their history. Paeans to the Third Rome and mystical Slavic unity sound downright bizarre to the WEIRD contingent, but they retain a coherence among many average Russians that Marxism-Leninism never possessed.

When your enemies plainly tell you what they believe, it’s time to listen. Vladimir Putin and his regime possess an official ideology, as they state plainly. Anyone who pays attention to Kremlin media outlets, especially those connected to Russia’s powerful intelligence services, cannot fail to notice their nationalist and religious essence, unless you really want to. Putinism has constructed itself in opposition to the post-modern West’s political, social and moral values across the board, especially in sexual matters.

Before we castigate Russians as mere antediluvians, it’s worth recalling that only a decade ago Barack Obama successfully ran for the presidency opposed to gay marriage. America, like most of the West, has advanced considerably in recent years, leaving behind large swathes of traditional morality in record time. Russia under Putin has not; indeed Moscow stands ready to resist these Western changes mightily.

We should note that by no means are all Westerners comfortable with these rapid sociopolitical changes, as attested by the rise of right-wing populism to political prominence and power in many Western countries of late—not least, President Donald Trump, whose admiration for Russia’s president and his regime seems to know no bounds. Trump’s essential clownishness detracts from the reality that there are plenty of Americans who retain the beliefs of 2008 rather than 2018.

It’s therefore deeply unwise to simply dismiss Westerners who have some sympathy for Putinism, as Freedman does, as mere misogynists, racists and homophobes—that is, obvious retrogrades whom polite and decent people need not worry about. If the WEIRD contingent, our elites, choose to make their stand on that ground, dismissing large swathes of fellow citizens as unwashed rubes who need lecturing and enlightenment, don’t be surprised when some of them object. If the West makes its choice binary—accept the full post-modern social program or you’re with Putin—we should not be shocked when some people choose the latter.

At the dawn of the last Cold War, the West, led by the United States, made serious political outreach to social democrats to embrace law-based democracy, to undercut the appeal of the Soviet-backed far-left. This effort bore considerable fruit and needs to be copied today to undercut Moscow’s aggressive messaging. This means reaching out to moderate nationalists and social conservatives who want to preserve Western democracy and the rule of law against the Russian threat. There are many more of them than our WEIRD elites realize. If we do not, those citizens will be left with no ideological alternative except the Kremlin’s. The necessary first step is admitting that the other side in Cold War 2.0 has an ideology at all. 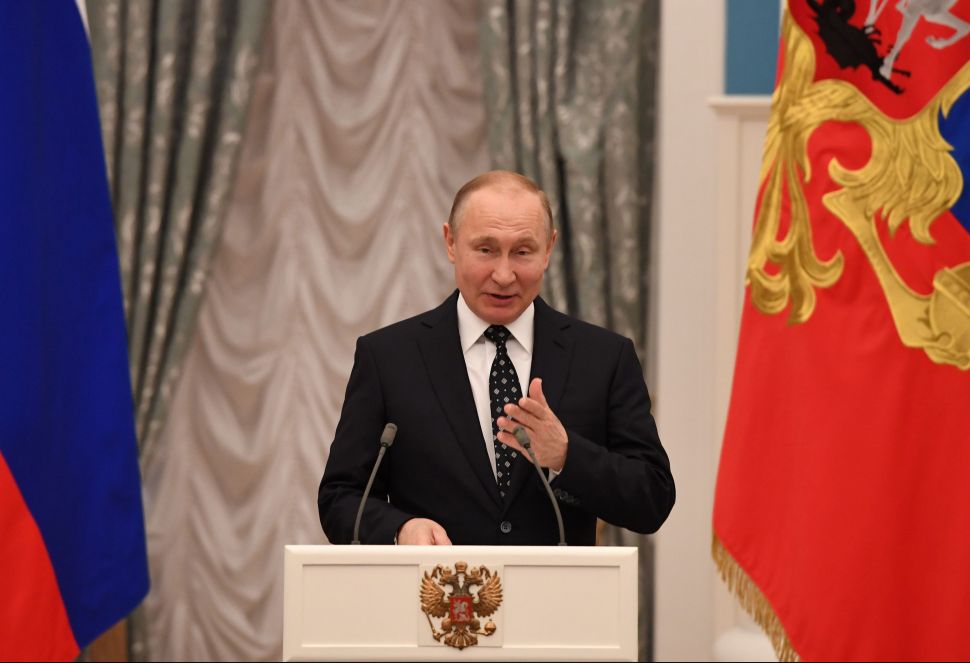