In November 2017, Saudi Arabia’s Crown Prince Mohammed bin Salman ordered the sudden arrest of 17 government officials and members of the Saudi royal family in what appeared to be a anti-corruption crackdown.

The seized officials were placed at the Ritz-Carlton Hotel in Riyadh, dubbed by Newsweek as “the world’s most expensive prison,” for weeks, until some of the detainees reportedly settled with the Saudi government for billions of dollars in exchange for an exit.

Most Western media interpreted the government purge as a scheme by Crown Prince Mohammed to rule out political enemies and consolidate power to pave way for his succession as the king of Saudi Arabia.

The most closely watched enemy of the crown prince was Prince Alwaleed bin Talal, a reclusive member of the royal family and one of the richest men in the world whose net worth has been estimated at $17 billion. His investment firm, Kingdom Holding Company, owns controlling shares in a number of U.S. companies and has tangled ties with Donald Trump, Rupert Murdoch and even Bill Gates.

Little was known to the public about his confinement over the past few months except that he was released in late January after reportedly paying the Saudi government $6 billion. Surprisingly, seven weeks after his release, Alwaleed volunteered to do a television interview to discuss what happened.

His primary motivation to speak up, he said, was the swirling “fake news” in Western media surrounding him and the entire government purge.

“In the last week or 10 days, a lot of false articles were written in certain newspapers, like The Wall Street Journal, The New York Times and CNBC. They were false and wrong. They were based on innuendos, rumors and heresy. So I want to clarify my position and the position of Saudi Arabia, although I don’t represent Saudi Arabia. But I’m a Saudi citizen,” Alwaleed told Bloomberg Television.

He also called out Forbes for not enlisting any Saudi names on its latest billionaires list.

“Now I’m starting to understand what President Trump means by ‘fake news.’ I agree with Mr. Trump. There’s a lot of fake news out there,” he said.

Alwaleed denied allegations reported by the Times that he had been tortured during the detention and by the Journal  that he had agreed to pay $6 billion to the Saudi government for his freedom, although he suggested that there might have been some physical controlling on those who had tried to escape or “do something crazy.”

As for his release negotiation, Alwaleed admitted that he had signed a settlement—or “a confirmed understanding,” in his words—with the government, but refused to disclose whether monetary payments were involved.

All in all, the interview didn’t reveal as much information about the arrest as people anticipated.

Throughout the one-hour interview, Alwaleed declined to directly answer most of the questions regarding the confinement. He said “I cannot get into that” or “confidential” six times. He also refused to use words like “arrest” or “settlement” to describe what happened.

However, Alwaleed’s public appearance was much needed to calm the investors who have stakes in his funds.

One week after his arrest, Alwaleed’s net worth evaporated by $2 billion due to the stock slump of Kingdom Holdings. The company has at least $1 billion of debt maturing over the next three years, according to Bloomberg analysis, and Alwaleed is already negotiating with banks (both local and international) to get $2 billion in new loans to fund future deals.

“When you are detained, for sure some of the business community, some of the banking community will say they have doubts. That’s my job right now, to interact, to meet with all of them individually or jointly and tell my story,” he said.

When asked whether everything he said during the interview was 100 percent true, Alwaleed said, “I have a confirmed understanding with the government, and it’s ongoing. I’ll elaborate on that: It’s an ongoing process with the government.” 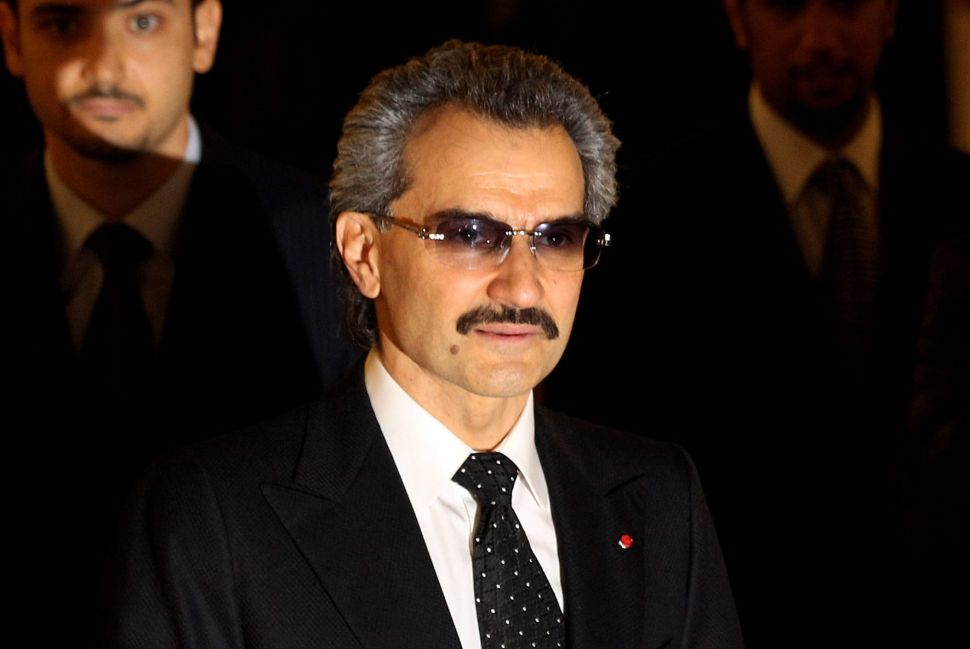