The training would also touch on measures employers can take to appropriately address complaints, and the New York City Commission on Human Rights (CCHR) would have to create a series of online interactive training modules employers can access online.

“I think it’s a great first step,” Rachel Piazza, a women’s rights advocate who leads feminist self-defense workshops, told Observer. “I think it’s a conservative step, too. I think that oftentimes… sexual harassment trainings aren’t truly effective. The ones that I’ve taken haven’t been—I haven’t thought they were very effective, that you can kind of just shrug them off, go through the motions.”

She said the strength of the requirement is that it is forcing employers to acknowledge the problem but wants deeper changes.

“I would just love to see in the requirements certain mandates as far as in-person trainings with a skilled, knowledgeable expert trainer, and I’d love to see women and the targets of violence really being empowered in how to navigate those,” Piazza continued.

In 2016, a federal Equal Employment Opportunity Commission Report found that just seven to 13 percent of survivors of sexual harassment ever file a complaint.

Jerin Arifa, a first-generation Bangladeshi and American-Muslim feminist, was one of two students who spearheaded the sexual harassment policy for all of CUNY, roughly 500,000 students and staff. Arifa told Observer that training should be conducted by experts who examine all forms of sex-based discrimination and advocated for in-person training, which she said is typically two two-hour long sessions.

“There were $699 million that employers paid because of sex-based discrimination all across the country—$699 million,” Arifa said. “It’s in the best interest of employers to spend the four hours and have the policies as opposed to spending all that money. So I think it doesn’t go far enough. I think every employer should be required to do that.”

Emily May, co-founder and executive director of Hollaback!, a nonprofit that seeks to end harassment in public spaces, pointed to the impact of street harassment and online harassment on employees, who she said “show up to work distracted” or end up taking a longer route to work.

“It wasn’t really until we had an assessment of the financial cost to employers that sexual harassment was taking on them… that employers really showed up on this issue so I think gathering research on this issue is very key,” May said during her testimony at the Council hearing.

And she offered recommendations, such as teaching employees what bystander intervention looks like in the workplace, training 911 operators on all forms of harassment and adopting a “Sick and Safe” leave policy that includes accommodations such as working from home and changing commute hours.

He pointed to the additional impact of gender, race, sexual orientation and immigration status and noted the trauma individuals experience after they report harassment or other forms of abuse, as well as when they interact with the legal system.

“It is important for any organization to understand the potential for trauma that someone might experience, and to ensure that this response is not minimized and that appropriate resources are available to them,” Johnson continued.

Carmelyn Malalis, commissioner of the CCHR—which recently held the city’s first workplace sexual harassment hearing in over 40 years—said that if there is a claim pending against an individual, the commission requires that the individual submits to training, conducted either by commission staff or another company whose training the commission has approved.

Malalis said the commission is reviewing the legislative package.

“It’s consistent with something that we already think is good practice,” she said.

In a statement, Cumbo told Observer the legislative package is an opportunity to refine and introduce new practices.

“I look forward to working with advocates through a working group where we can integrate their hands-on experience to enhance our legislation and implement the most effective strategies that will help end sexual harassment in New York City,” she said.

Manhattan Councilwoman Helen Rosenthal told Observer the objective of the hearing was to understand what the city does for its own workforce, as well as what the city can do for private sector workers.

“I certainly expected there to be followup conversations that I will have with individual groups and try to help educate us if there’s an opportunity for additional legislation or policy implementation,” she said. “And I would guess that there will be, I would hope there would be a second hearing talking about additional legislation that’s needed.”

Adira Siman, vice president and general counsel for the Partnership for New York City, a nonprofit membership organization that represents the city’s business leaders and largest private sector employers, read a statement on behalf of Kathryn Wylde, the group’s president and CEO.

She said most employers understood the importance of creating corporate cultures where employees respect each other “long before the #MeToo movement.”

“We would respectfully suggest that many employers may have more knowledge and experience than the City Council regarding best practices for prevention, training and responding to sexual harassment in the workplace,” Siman said.

Rosenthal said she hopes the organization will provide the names of the firms and expressed openness to their ideas. Advocates blasted Siman’s comment.

“This whole #MeToo campaign it’s not like, ‘Oh well the last few years, it’s been fine,'” Piazza said. “No, it hasn’t been fine. It’s still not fine, and I don’t foresee it being fine for a while.” 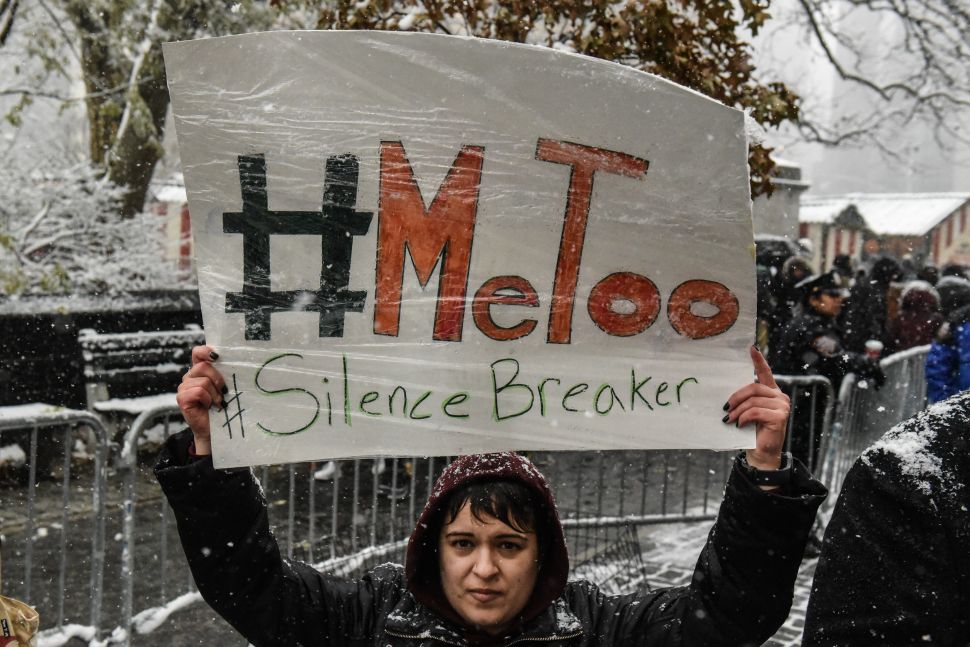