The late Shirley Chisholm—the first-ever black congresswoman and first woman and African-American to seek a major party presidential nomination—could become the second black woman to receive a full statue in the U.S. Capitol.

California Senator Kamala Harris and New York Rep. Yvette Clarke (D-Brooklyn)—who currently holds Chisholm’s seat—introduced bicameral legislation that would place a statue of Chisholm in the U.S. Capitol. The bill, which comes after Black History Month in February and amid Women’s History Month, orders the Joint Committee on the Library to enter into an agreement to obtain a statue of Chisholm five years after the bill is passed.

There are currently 100 statues in the National Statuary Hall Collection at the Capitol, two for each state.

If Chisholm’s statue were to come to fruition, she would become the second black woman to have a statue there. The first statue of a black woman in the hall is for Civil Rights Movement activist Rosa Parks. Abolitionist and women’s rights advocate Sojourner Truth’s bust is the first sculpture to honor an African-American woman in the Capitol but is not a full statue.

“Every statue in Statuary Hall tells the story of American import to those who visit our Capitol, and if we want to tell the whole story, then we have to have a Statuary Hall that is reflective of all of the contributions of the American people,” Clarke told Observer on Monday afternoon. “That includes African-Americans, that includes women, and unfortunately our Statuary Hall is lacking in both their representation of the work of women and their contributions to our nation as well as black women.”

In 1968, Chisholm became the first black congresswoman, representing a Brooklyn district until 1983. She was born in Brooklyn in 1924. And in 1972, she became the first woman and African-American to seek a major party nomination for president of the United States. She died in 2005.

Clarke said she started working on the legislation at the beginning of the year.

“We really believed that it was important to build a monument here in the United States Capitol and in the House of Representatives because of the truly iconic role that she played in being the first black woman to be elected to the United States House of Representatives and with that came the voice of black women in this country,” she continued. “They’ve not been a part of the body politic at the federal level. And I say that in the sense that there was no physical representation of black women here in the Capitol in the form of a representative.”

And she noted that Chisholm paved the way for future candidates to make historic achievements, also pointing to her work in advocating on behalf of children and families.

“Many people say it—and I agree—that she was truly ahead of her time becoming the first woman and first black person to seek the Democratic nomination for president of the United States, a precursor [to] what ultimately would be a successful run for president of the United States for President Barack Obama and certainly a forerunner for actually obtaining the Democratic nomination by Hillary Clinton,” Clarke added.

Since Chisholm became the first black woman elected to Congress in 1968, 38 black women have served in Congress from 16 states, according to a new report titled, “The Chisholm Effect: Black Women in American Politics 2018.” The report was prepared by Higher Heights for America Leadership Fund and the Center for American Women and Politics.

There are currently 18 black women in Congress, including 19 black women representatives and one black woman senator, the report found. There are also two black women who served as non-voting delegates.

Clarke said New York State has yet to have a black woman elected statewide, noting that state Senate Democratic Leader Andrea Stewart-Cousins should be “supported to move to majority leader.” A group of breakaway Democrats in a power-sharing agreement with the Senate GOP and a conservative Democratic Brooklyn state senator who caucus with the Republicans have prevented Democrats from having a majority.

She said the state has “made a lot of gains” in the state Assembly with respect to representation of black women and pointed to the significance of Public Advocate Letitia James, the first African-American woman elected to a citywide position. But she argued that work remains at the city level.

“You see sort of a retrenchment in the City Council where black women and women overall have lost seats, have given up seats to their male counterparts and so then numbers that we’ve had in the past in the New York City Council have diminished a bit, but that means that we have to build a pipeline,” Clarke said, referring to the decrease in the number of women in the Council after last year’s elections.

Clarke said it was “very heartening” to hear that Harris, Booker and Gillibrand were willing to do a companion bill, noting that they need both chambers “in order to move this process along.” As to whether she anticipates any opposition, she said she has “yet to hear anything.”

“You can always anticipate there will be some level of opposition just by virtue of the body that we’re in, but I don’t see this being so controversial that it won’t pass the House and won’t pass the Senate,” she continued.

Other statues in the Capitol include the late presidents Abraham Lincoln, James Madison and Thomas Jefferson. 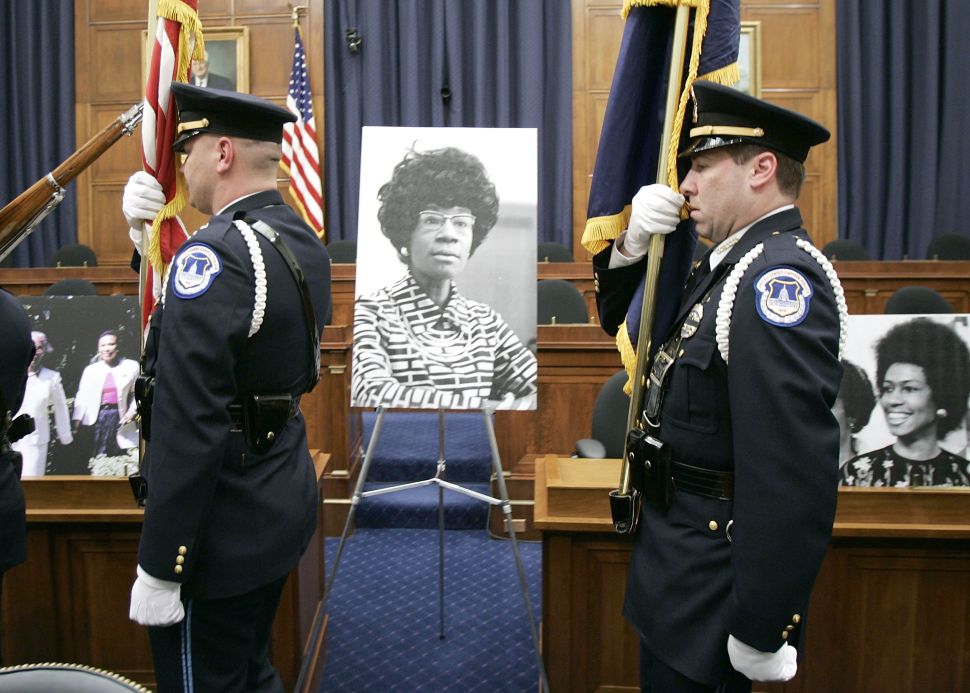