New Jersey Senate President Steve Sweeney unveiled a plan on Tuesday to boost funding for schools by raising taxes on some corporations, offering an alternative to Gov. Phil Murphy’s millionaires tax a week before the governor proposes his budget to the legislature.

Sweeney, who has lately argued against raising taxes, said he wants to impose a three percent surcharge on corporations earning more than $1 million in net income. That would generate $657 million in annual revenue, his office said, which would help pay for a $758 million school funding overhaul Sweeney also announced Tuesday.

Murphy, a Democrat, is expected to include revenue from a tax hike on millionaires in his budget proposal on March 13, potentially setting up a showdown with Sweeney, who has called a millionaires tax a “last resort.” Murphy’s millionaires tax would generate roughly $600 million for the state’s coffers.

Sweeney (D-Gloucester) said he didn’t see his plan as an alternative to a millionaires tax, though he noted that corporations, unlike individuals, can still fully deduct state and local taxes under the new federal tax law. He said he didn’t tell Murphy’s office about his school funding plan before publicly announcing it.

“This isn’t me against him,” Sweeney said. “This is myself as a senator, as a Senate president, looking at ways to find funding for our schools. I think this is one that does the least amount of damage to the state of New Jersey.”

Murphy was receptive to Sweeney’s corporate tax hike idea when asked about it during an unrelated news conference, saying it has “some appeal.” But he said he had concerns about how it would affect smaller businesses that just surpass the seven-figure threshold and said he didn’t see it as an alternative to increasing taxes on the wealthy.

Sweeney said his proposed corporate tax hike on about 2,375 companies would allow the state to “recapture” the windfall that businesses received as a result of the federal tax law. His office said corporations got a $2.9 billion federal tax cut on profits made in New Jersey under the Republican-led tax overhaul, which cut the federal corporate tax from 35 percent to 21 percent. Sweeney’s plan would raise the state Corporate Business Tax rate from nine percent to 12 percent on businesses earning more than $1 million in net income

“We’re not going into their pocket. This is a windfall, so we’re asking for a portion of the windfall to help taxpayers,” Sweeney said. “This is $2.9 billion they don’t have, that the federal government is giving them as a gift.”

Sweeney said he would pay for his $758 million school funding overhaul with nearly all of the $657 million in new revenue, though $26 million of those new funds would have to go to environmental programs as a result of a previous constitutional dedication. The rest of the money in Sweeney’s plan would come from taking $127 million from so-called “overfunded schools” that Sweeney argues have been getting too much state aid under the School Funding Reform Act.

The corporate tax hike idea was welcomed by liberals and criticized by conservatives.

Gordon MacInnes, president of the New Jersey Policy Perspective think tank, said Sweeney’s plan is “a sensible step to recoup some of the windfall that profitable corporations will get from the new federal tax law.”

“But let’s be clear: by itself, it will not produce enough new revenue to invest in New Jersey’s neglected assets and put the state back on the path to prosperity. It is, in short, a welcome first step,” he said in a statement.

“If we raise taxes even higher, we won’t ‘recapture’ anything from businesses that choose to move away to the many other states that will let them keep their federal tax savings,” Kean said in a statement. “The price for bad tax policy doesn’t fall on faceless corporations, but on middle-families that lose jobs, raises, and an opportunity to build financial security.”

Sweeney, who has supported a millionaires tax in the past, has recently said the new federal tax law has forced him to re-examine any plans to raise taxes. That’s because the tax overhaul capped the state and local tax deduction at $10,000, a move seen as harming high-tax states like New Jersey, which is said to have the highest taxes in the nation.

Despite Sweeney’s opposition to the millionaires tax, Murphy doubled down on his call for raising taxes on the wealthy during a speech last week. He has also called for closing a tax loophole that allows corporations to shift profits made in New Jersey to lower-taxed states, something that could generate $290 million. 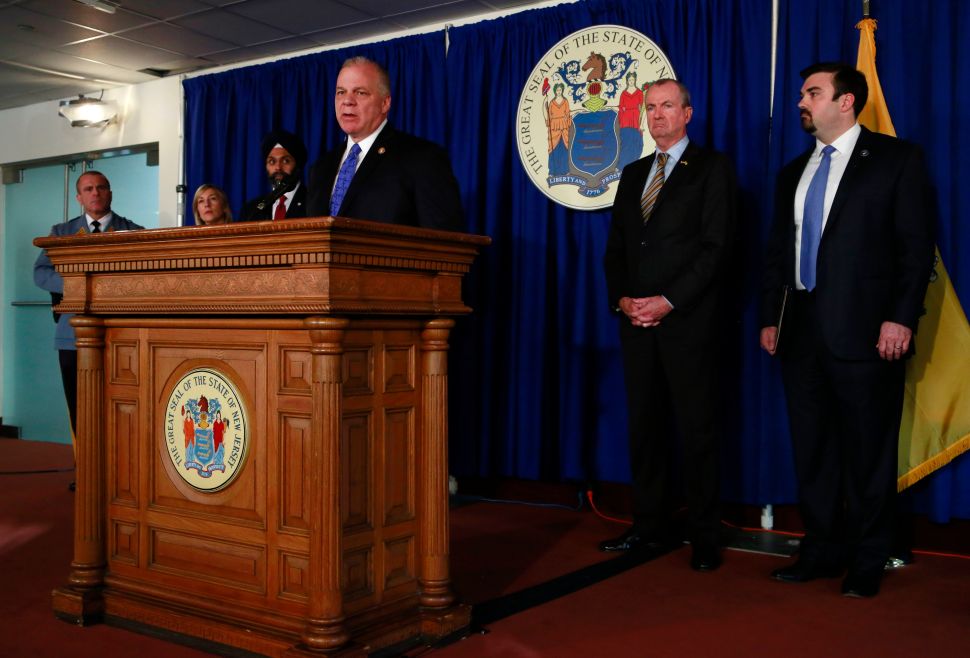