Blanton Museum director Simone Wicha wouldn’t necessarily attribute the design of the emergency exit door in their new structure to Ellsworth Kelly. But, she says, you could almost consider the exit to be the work of the artist. He certainly had the final word on how this, and every other element in the new, gray limestone building would look to visitors—from the security system and the lighting, down to the construction’s exact position on the grounds at the Austin campus of the University of Texas.

To say the building was a labor of love would be an understatement. The artist had been planning it since 1986. And despite his ailing health, he was still fastidiously working on bringing it into being when he passed away in December of 2015 at the age of 92.

For the Blanton, as for the art world at large, the death of this artist, who came to prominence during the late 1950s and ’60s with his striking color field paintings and minimalist sculptures, was a great loss. But, still reeling from the news, the institution knew how they would pay tribute to his legacy. He had signed off on every last detail, and ground had just been broken; they would bring his final work—which he had decided that year to call Austin—to life.

With a T-shaped floor plan that takes up 2,715-square-feet, Austin could be described as a spiritual place. With dim lighting and domed ceilings, the sound of visitors’ footsteps echo across the walls. Each arm of the building is like an alcove, lending intimacy. The obvious analogy is to Houston’s Rothko Chapel, another purpose-built, contemplative space dedicated to the work of an influential minimalist. But that comparison belies the nature of this structure. Austin is not a place to hold works of art, it is a piece in and of itself.

The works that are contained inside—14 black and white stone panels representing the artist’s interpretation of the stations of the cross, and an 18-foot-tall redwood totem—will never be moved, loaned or swapped out for something else. The built-in components of the structure—namely the constellations of stained glass windows that occupy three out of the four walls—bounce through the interior and the 15 objects within it throughout the day, illuminating the stone and wood with a rainbow array of lights that change, depending on the sun’s angle.

At $23 million dollars, building Austin was a mammoth effort for the Blanton to pull off—and an unusual venture for them to even embark upon in the first place. With a collection of 18,000 pieces, the institution could be considered moderate in scope. Dedicating this amount of money to one work, by one artist, would, quite frankly, be considered crazy for a museum of this size. (For comparison, the Met’s second largest purchase on record is Jasper Johns’s White Flag from 1955, bought in 1998 for approximately $20 million.) The Blanton has taken a risk…but it’s one that institutions similar in scale would do well to follow.

Their collection, which includes European Art before 1900, Modern and Contemporary Art and Latin American Art, has some excellent examples of work from each movement and period and is an asset to the local community. But Austin puts the Blanton on the map, in a global sense. It’s a place that modernist devotees will consider to be a site of pilgrimage. Nobody else has anything like it.

“It was the only project of its kind in his whole body of work,” Blanton curator Carter E. Foster told Observer in a conversation just before Austin‘s opening. “He’d never really designed a building before, or a total environment the way this is.” Bringing it to life, Foster said, “never left his mind.” And Foster knew the artist well, he was a close friend and even has a tattoo designed by Kelly, specifically for him, that’s now inked on his forearm.

Considering the museum has dedicated so much focus and a massive amount of resources to this one project, they’ve decided to wait a full year to see the piece’s scope, throughout the seasons, before making any further decisions about what the space can and can’t be used for. At the moment, tours do not go inside, because the echo of the cavernous space imposes on its meditative feel. Director Wicha noted that she expected to get a lot of requests to use the space for events (weddings, in particular) but that the museum was just going to let it be nothing more than a remarkable place for people to visit for now, just like any painting, sculpture or work of art accessioned into the collection of a museum. 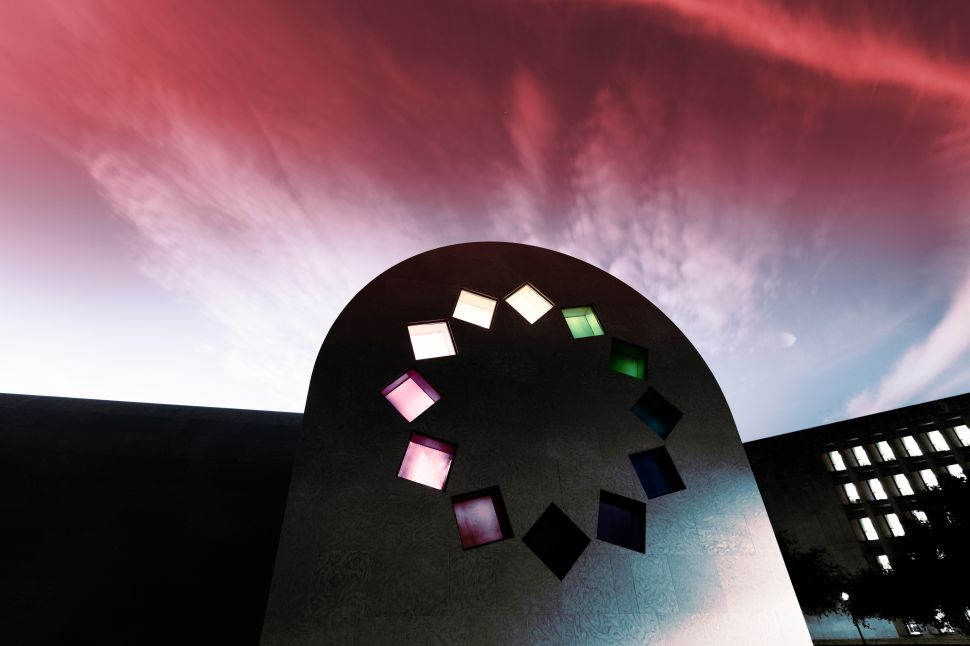