On Tuesday, the Centers for Disease Control and Prevention (CDC) confirmed what anyone paying attention to the country’s drug overdose crisis already knows: Like an unattended wildfire, our historic catastrophe is spiraling further and further out of control.

Between July 2016 and September 2017, emergency rooms recorded a 30 percent increase in overdose victims, according to CDC data. More Americans, of all ages and genders, are overdosing all across the country. The sharpest increase is in the Midwest, where overdoses increased nearly 70 percent—but since many opiate users who overdose never make it to the hospital, the real figure is much higher.

Some 64,000 people died from an overdose in 2016, the last year from which full data is available. Whenever the 2017 number becomes available, it will be much higher—the only question is by how much. Nothing has changed, except everything is worse.

This is the context in which the Trump administration called an “opioid summit” last week, an orchestrated roundtable of pablum called to “highlight the progress the administration has made” in solving the carnage. Initially a task delegated to First Lady Melania Trump, the president himself made a brief surprise appearance. As he has to-date, the president said next to nothing, which signified everything.

It took Trump until November to declare the epidemic a public health emergency. In the four months since, members of Congress and public health officials have been repeatedly asking when something will happen—and openly wondering what, if anything, the administration is doing on the issue.

Trump had little to say and even less to show. He voiced support for sentencing drug-dealers to death, like they do in the Philippines and other countries, as many states have been able to do in America since the 1980s. He said the Justice Department should sue pharmaceutical companies, as the attorney general of Ohio has already done.

And aside from a vague promise to do something else sometime in the future, that was it. Trump said some “very, very strong” policy on opiates would be coming within the next few weeks. The very best policy. Believe him.

It would be appropriate to describe the administration’s approach as blinkered or bewildered if it weren’t also so blithe and nonchalant. “It’s kind of like pointing to a burning building and saying, ‘Oh, there’s a fire there. There’s an emergency,’ And then not calling the fire department and watching it burn down,” Dr. Andrew Kolodny, co-director of opioid policy research at Brandeis University, told NPR.

Kolodny’s analogy is good, but it doesn’t go far enough. It’s not even clear that Trump has a fire department assembled, or who’s supposed to be running it. Nobody can say who’s in charge, which is a good indication that nobody is actually in charge, and nothing is happening while more Americans get sick and die. The bitterest irony is that these are the very Americans who gave Trump the nuclear codes.

As any candidate who hopes to be president must, Trump won Ohio and Pennsylvania, and with them their stack of decisive Electoral College votes. Jarring as it was at the time, those two results are predictable enough in hindsight. Mercurial Ohio has a deep conservative streak, and whether Pennsylvania was a credulous mark or just a vulnerable one with an obvious weakness, its much deeper reliance on coal left it susceptible to a cheap salesman’s trick like Trump’s bunk promise to revive mining.

But then Trump won Michigan and Wisconsin. All four states are connected by the Rust Belt, and there are enough down-and-outers for Trump’s politics of grievance to enjoy play, but the real connection here is shared trauma. According to the CDC, Ohio and Pennsylvania have the second and fourth highest opiate overdose rates in the country. Michigan and Wisconsin have seen fatal opiate overdoses increase by nearly 20 and 25 percent respectively.

Better than unemployment, misogyny or nativism, opiate deaths predicted strong turnout for Trump. The epidemic has been good for the president, who “capitalized on and exploited the feelings of… suffering and hopelessness,” said Shannon Monnat, a Penn State sociology professor who first uncovered this link.

Like almost everything else with his administration, Trump’s approach to opiates is an ad-hoc mystery, a slapdash assemblage given all the care and attention of a homework assignment dashed off while on the bus to school. It would take a twisted, cruel cynicism bordering on sociopathy to suggest the Trump administration doesn’t much care to solve the overdose crisis because it is helpful in this way, but the White House isn’t helping—itself, or anyone else. By all appearances and actions, Trump has no idea what to do, and isn’t making much of a show to pretend otherwise. 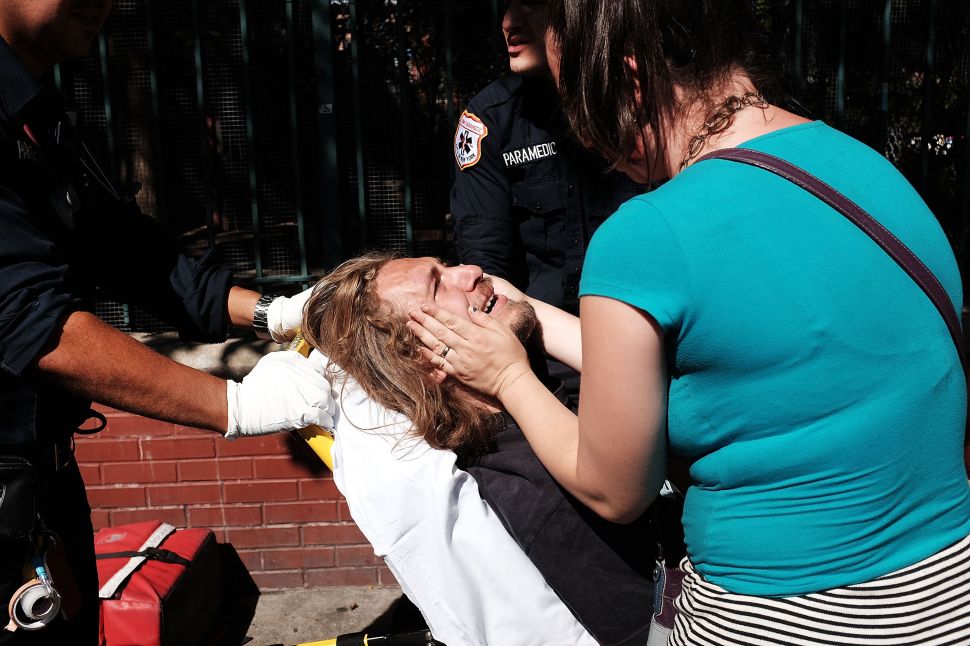