There’s something so undeniably ironic about stepping into a hushed, by appointment only shop to coo over faux flowers.

Late last week, that was the scene at Moda Operandi’s well-appointed shop, located five steps east of Madison Avenue, where society swans like Deeda Blair sipped champagne at 3 P.M. in their fur coats, while considering adding a few pots of ceramic chrysanthemum to their Upper East Side abodes.

These fake flowers weren’t just any blossoms; they were full-on sculptures by Russian architect-turned-artist, Vladimir Kanevsky. There was a gargantuan pot of lilacs, with pale purple petals in various stages of unfurling, a single white rose poking out of a teeny clay pot with leaves that had been carefully wilted to perfection and a delicate sprig of lily of the valley, as if freshly plucked from a garden and tied with a string. By the way, that aforementioned cluster of lilies goes for $5,500, and is already sold out, but the hefty pot of lilacs is still up for grabs, priced at a cool $180,000.

So no, it’s not really appropriate to consider Kanevsky’s arrangements, which are made from ceramic, porcelain painted copper, bone china and terracotta—and which have previously been on display at the State Hermitage Museum in St. Petersberg and Serge Sorokko Gallery in San Francisco—as a replacement for a fresh bouquet of flowers.

“Some people say, ‘Oh, how convenient, you buy flowers that you don’t have to deal with.’ But I hope this is something bigger, because at this scale, it can be almost like the history of flowers and architecture and sculpture and art,” he told Observer.

Lauren Santo Domingo, the co-founder of Moda Operandi, agrees wholeheartedly. “Vladimir is not just a master craftsman. He has created something that just as easily resides in a townhouse uptown, in front of an old masters painting, or in a Tribeca loft under a light fixture from Apparatus Studio.”

Santo Domingo was first introduced to Kanevsky by Blair and Annette de la Renta, the second wife of late designer Oscar de la Renta. However, after a visit to his studio in New Jersey along with Vogue‘s Hamish Bowles, she reached out to the artist via Instagram to discuss a partnership, commenting, “Let’s do something together” on one of his pictures. Clearly, she knew this would be a hit among the Moda crowd, as the shoppers on her website have scooped up almost half of the 24 exclusive pieces Moda Operandi is offering, in a sale that will end tonight.

Kanevsky’s pieces, which are inspired by actual flowers he finds in his backyard, at the Bronx Botanical Gardens or online, might appear to be hyperrealistic, but they are actually infused with subtle touches of whimsy and fantasy. Look closer and you’ll notice that alongside a pale blue morning glory bloom is the curling vine of a sugar snap pea and elsewhere, a flash of red, as a strawberry grows alongside a white poppy. Even the anatomy of the plants seems to defy how they appear in nature, like the chrysanthemums that usually grow vertically in a bush-like shape; in Kanevsky’s world, the blooms jut out at odd angles.

“These blue circle zinnias, they don’t look like zinnias,” Kanevsky points out. “They have two kinds of leaves, which never happens.” This is what the artist considers to be “not the botanic truth.” But because these creations are works of art, it would almost be boring and too expected for them to be entirely true to life.

But it still raises the question: Would Santo Domingo, whose residences in Paris and New York have been breathlessly fawned over by Vogue countless times, ever actually decorate with fake flowers? 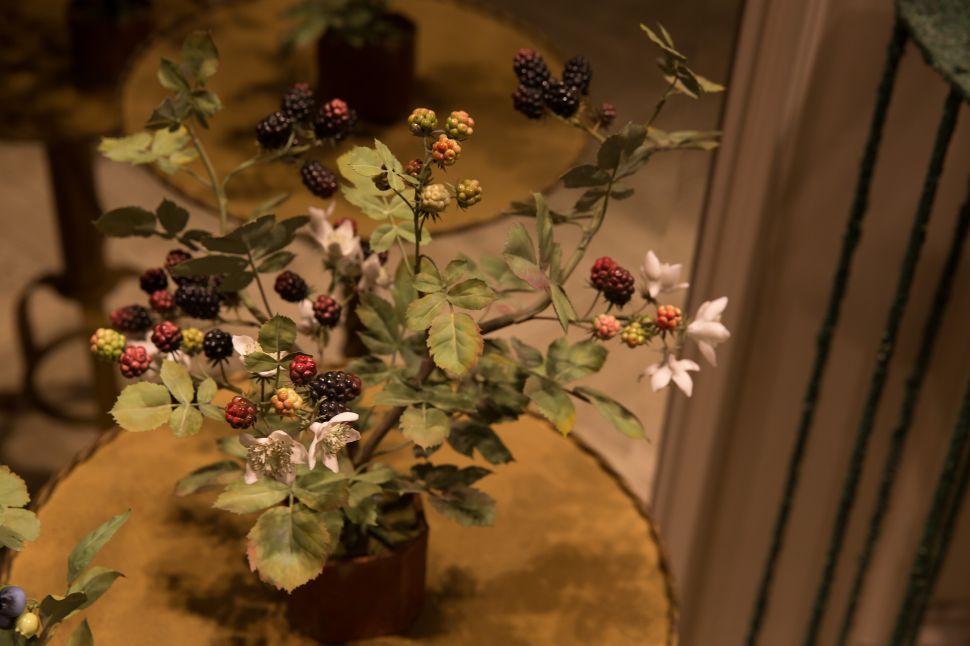