George W. Bush gave us Iraq, and Barack Obama gave us drones. There’s time yet for our mushy president to embroil us in a country his voters can’t find on a map, but so far, the champion of the alt-right’s preferred battlefield is domestic.

Under Trump, who campaigned hard on anti-war, anti-interventionist credentials, we live in a literal trap house, the ideal conditions for the state to deprive us of what the Founding Fathers believed were our unalienable rights. Police can take our stuff, and Trump is thrilled to have them do it.

Albuquerque, New Mexico presents an object lesson. There, police have spent most of the last decade assembling a massive car collection. Between 2010 and 2015, APD seized 8,369 vehicles from local citizens, from whom they also pocketed $8.3 million in cash.

In half of those instances, the cars’ owners didn’t do anything. Nobody disputes this. They were not even accused of doing anything. But in Albuquerque, city law extended asset-forfeiture proceedings—the process by which the government seizes property connected with crimes—to allow the government to take vehicles involved in drunk-driving cases, no conviction necessary.

Cars could be seized by police even if the driver had taken the vehicle without the owner’s knowledge or permission. Whatever the circumstances, owners had three choices. They could pay the city to get their cars back. They could hire a lawyer to fight the city in a lengthy court battle (during which time the car would remain impounded, racking up storage fees). Or they give their car to the city. Whatever they chose, it meant cash money for the city. Albuquerque’s program was such a hit that other cities across the state launched copycats.

A tool hit upon during the cocaine cowboy days of the 1980s, when drug profits remade the Miami skyline, civil asset forfeiture is not a popular practice. Even Alabama Republicans think it’s an abuse of power. Albuquerque’s car-seizure program is merely a particularly nasty version—but more importantly, it’s an example of drug-war policing tactics creeping into other aspects of law enforcement. (Another example: Cops patrolling inner-city urban neighborhoods with heavier equipment than Marines in Afghanistan.)

Asset forfeiture is an enormous business. In 2014, according to the Institute for Justice, American police seized $4.5 billion worth of cash and property—an increase from $95 million in the mid-1980s, before the Just Say No era launched in earnest, and up from $1 billion in 2008. In almost every case, the proceeds go straight into police budgets.

If prosecutors believe a house or a car was used to sell drugs, they can take it. If they believe cash or property was bought with money gleaned from the sale of drugs, they can take that cash or property. If you want it back, you have to prove in court that you came by your stuff honestly. If you work in a cash business and don’t keep careful books, you are in trouble.

You can see the problem. Governments have an enormous incentive to seize as much property as possible, and they can do so remarkably easily, which is why only a handful of states have begun to reform the practice.

According to the Drug Policy Alliance, New Mexico has the strongest protections against civil asset forfeiture, referred to “policing for profit” by its critics, of any state in the nation. Yet Albuquerque’s car-seizure program only ended this last month, and only after a March 30 ruling from a federal judge forced the city’s hand.

This shows you the lengths to which government officials will go to cling to asset forfeiture, even if lawmakers and voters are telling them that it’s over, that the citizens are tired of state-sanctioned theft that violates the republic’s founding principles.

All this is to say that the drug war won’t end until civil asset forfeiture stops. Quite possibly, asset forfeiture must stop first—if police can’t take a house or car for a drug crime, and that drug crime is nonviolent, it’s reasonable to assume that the police might not show up in the first place.

This brings us back to Trump. Last summer, Attorney General Jeff Sessions asked American police and prosecutors, like those in Albuquerque, to ramp up asset forfeitures.

He did this a few months after Trump promised agitated police that he would take care of any pesky lawmakers seeking to curb the practice and that asset forfeitures could continue unabated—the equivalent of telling a roomful of generals to forget Congress and the citizens, and to look underneath their seats for keys to a brand-new F-35.

Donald Trump, the peaceful candidate, is thus encouraging a sharp buildup in the longest and costliest domestic conflict America has seen—and stomping all over a pet issue dear to Rand Paul, Trump’s libertarian defender who insists the president’s instincts are anti-war.

Trump could be doing this because Obama was trying to undo it. Or he could be trying to curry favor with militant cops. Whatever the reason, it was always going to be a long, long time before the war on drugs ended. Trump is ensuring the wait is even longer—and that in the meantime, the conflict expands to include issues unrelated to drugs. 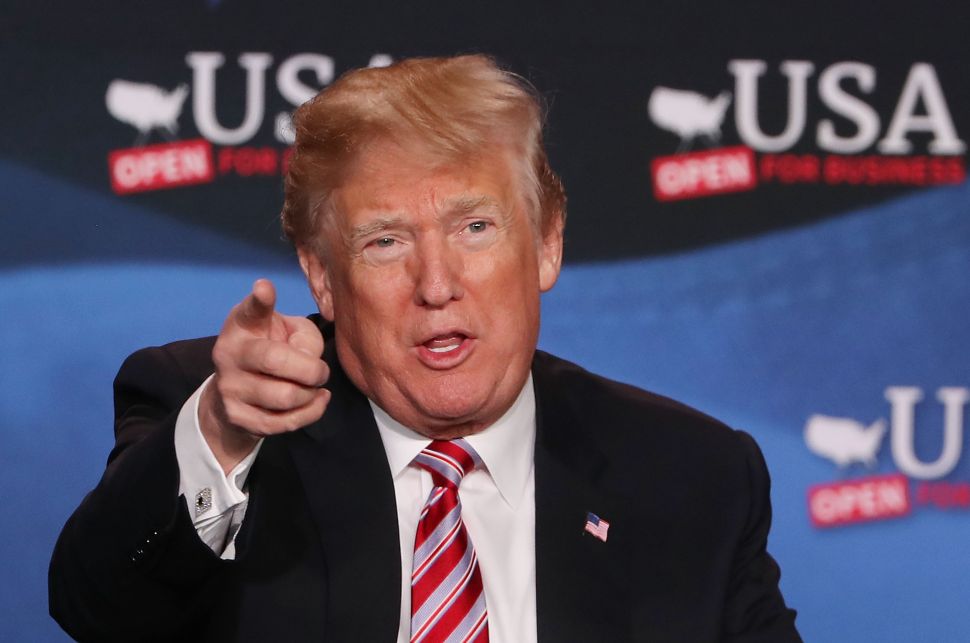