“Alla cantata ancor manca la Diva,” snarls the corrupt police chief Scarpia in act two of Tosca, “This show is missing a diva.” Sadly, that observation has also applied to performances of Puccini’s melodrama at the Met for the past eight seasons: not since Karita Mattila tackled the title part in 2009 has the company offered a real superstar personality in this protean role.

Until last Saturday night, that is, when Anna Netrebko made her role debut as Tosca—her first performance of the part ever, on any stage—and left the Met audience roaring “brava!” in appreciation for her sensuous singing and breathtaking acting.

One particular strength of the diva personality is its ability to persuade the audience that the quirkiest artistic choice is valid, even inevitable. Singers of Tosca generally emphasize the mercurial, tempestuous aspect of her persona, but Netrebko keyed her performance to the warmth and generosity of her rich lyric soprano. The result was a Tosca always true to the text and music, but encompassing great sincerity and charm, a genuinely lovable human being.

The lurid scene in the second act when the heroine wields a knife to defend herself against rape felt particularly immediate, especially when Tosca, having done the violent deed, collapsed on the floor, hyperventilating.

This moment stood in striking contrast to the celebrated aria “Vissi d’arte” just a few minutes before, which Netrebko performed with an almost classical restraint.

The singing was free and gorgeous, especially in the majestic arch of sound she created in the climactic phrase including a lustrous high B-flat, but the attitude had the self-possessed confidence of a young saint. (I wonder if Netrebko has given any consideration to Orleanskaya Deva/The Maid of Orleans, Tchaikovsky’s opera about Joan of Arc.)

Though this performance abounds in original detail (she made the famous suicide leap off the Castel Sant’Angelo for once look absolutely spontaneous), the most impressive aspect was how little you noticed the singing or acting as such. Netrebko just revealed Tosca to you, so generously and so completely you’d almost forget you’re at the opera.

She doesn’t do all this alone, of course. The tenor Yusif Eyvazov, jumping into the production on 10 days’ notice in the role of Tosca’s lover Cavaradossi, put his idiosyncratically gritty voice to the service of a fine musical imagination.

Especially impressive was hushed and sustained account of the last act aria “E lucevan le stelle,” with each phrase extended as if the doomed characters wanted to hold on to every memory as long as possible.

As Tosca’s antagonist Scarpia, Michael Volle smoldered with scarcely-concealed rage, suggesting malevolence on the scale of a horror film villain. He finessed the (for him) extremely high tessitura of his second act rantings so well that one or two cracked top notes sounded completely in character.

The supporting cast was adept, but the Met needs to find better conductors for this bread-and-butter work. Bertrand de Billy avoided the sloppiness Emmanuel Villaume inflicted on Tosca earlier in the season, but at the cost of ponderous tempos that made the opera seem to unfold in slow motion.

Of David McVicar’s glumly retrograde production, the best that can be said is that John Macfarlane’s heavy, literal sets mostly did not get in the way of Netrebko’s original and spontaneous stage movement.

The soprano was so vivid I think she might even be able to make something of Montemezzi’s potboiler L’amore dei Tre Re, a stripped-down staging of which New York City Opera rushed in and out of the Rose Theater a couple of weekends ago. But even she might be daunted by the piece’s leading female role of Fiora, a flamboyantly adulterous noblewoman murdered by her father-in-law, who then paints poison on the corpse’s lips and lays it out on funeral bier as a lure to capture her guilty lover.

As you can tell, it’s a very strange work, and it features a bombastic, ranty post-Wagnerian score besides. NYCO cheaped out on no-name singers (except for bass Philip Cokorinos, in muscular voice as the vengeful Archibaldo) and a borrowed setting of painted flats so teeny in scale it could be used for a kindergarten production of Once Upon a Mattress.

With NYCO on such shaky footing, once again it appears the Met is the only game in town. Thank goodness the company has Anna Netrebko! 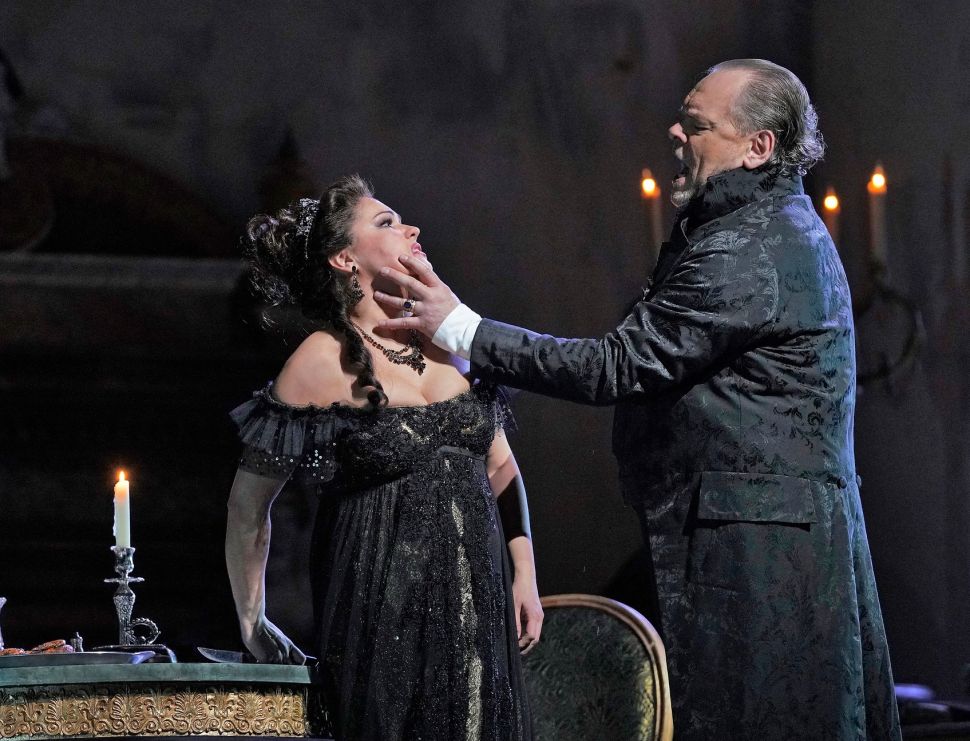