Members of the Avengers initiative sat down for an interview with Observer’s entertainment reporter Brandon Katz. The group of heroes touched on a wide range of topics ahead of Avengers: Infinity War, including their shared dislike of Hawkeye, the failure of Justice League and what life is like as a celebrity superhero.

Read the full transcript of the intrepid interview below.

Tony Stark: Well, a bit irksome at this point to be honest, especially considering that my suit is made out of a gold titanium alloy and not iron. At first, the name didn’t bother me because it was catchy, but after all this time, I’m legitimately concerned about American education. Hell, T’Challa’s little sister is a high schooler, and she can outthink the entire U.S. government. It’s a joke.

You seem a bit… stressed.

It’s not like I’ve been the world’s most recognizable superhero for 10 fucking years. It’s not like I flew a nuke into a friggin’ wormhole to save New York City, invented a killer robot and then destroyed said killer robot. It’s not like I have to lead this team against Thanos, the universe’s most dangerous threat this side of Trump.

I used to be a god damn legend. I had private planes with stripper poles. I woke up in the afternoon, mixed myself a jack and coke, invented era-shattering technology and bedded supermodels whose names I never learned.

(Begins to tear up)

What happened to me?

(Starts to mix himself a drink)

So do you regret becoming a superhero?

Tony: No, it could be a lot worse. I could be Hawkeye for fuck’s sake.

Hawkeye: Dammit, Tony, you said you’d stop making fun of me in public.

Thor: Ha! It’s funny because your weaponry is outdated, and Tony is suggesting a similarly antiquated firearm.

So, Steve, how does it feel to be reunited with the rest of the Avengers after some time in hiding?

Steve Rogers: You know, Avengers has such a dark and negative connotation. I feel like we’re more of a… league of people… committed to… justice (everyone begins to snicker).

Are you referring to Superman, Wonder Woman and the other members of the Justice League?

Steve: I’m sorry what was that last part? I couldn’t hear you over all this box office money (laughter continues).

But seriously, now that Louis C.K.’s career is on ice—get it?—I know that if I’m ever feeling down and am in need of a good laugh, I can just stroll into a DC Extended Universe movie to get my chuckles. I mean, did you see that knockoff Lord of the Rings troll they had as their main villain? (Laughing intensifies.) I’ve seen more intimidating crap in Hulk’s toilet!

Captain, I must admit, I’m a bit surprised at your attitude. You’re known to be so wholesome and respectful.

Steve: Hey man, we live in a crazy time. When I woke up from my ice nap, I discovered mankind had advanced to the point where the entirety of all human knowledge was available on small devices we carry around in our pockets… and instead, we use those devices to steal music and watch videos of people having sex.

Why can’t Captain America have some fun, ya know?

Fair point. So what do you do when you’re not superhero-ing?

Steve: I like to go to the movies. And the best part about it is that everyone knows who I am and my whole World War II-frozen in ice backstory. So I just pretend to be suffering from PTSD and act like movie tickets still cost the same as they did in the ’40s. No one ever calls me out on it.

Using a serious condition that affects millions of people to get cheaper movie tickets is wrong, Mr. Rogers. What do you have to say for yourself?

Steve: ….Bruce and Natasha are sleeping together!

Black Widow: STEVE! (Looks over to Bruce for affirmation.)

Thor: Ha! It’s funny because their physical intimacy is not an appropriate topic of conversation during an interview.

Tony: Once again, you’re right on the money, buddy.

Spider-Man, you’ve been awfully quiet through all this. How do you like being an Avenger?

(Spider-Man doesn’t look up from his phone.)

Tony: Don’t mind him, he finally hit puberty and thanks to the unlimited plan I hooked him up with, he can Tinder all day. I may not be the kid’s biological father, but he sure does seem to take after me.

Vision: Might we please get back on track and focus on what’s important?

Vision: (pauses) The fact that Hawkeye still uses a bow and arrow! (Everyone laughs)

Steve: Even the robot is dunking on you, dude!!!

Tony: The best part about it is I could give him an Iron Man suit anytime I want. I just don’t—for comedic purposes.

Hawkeye: That’s it, I’m sick of getting no respect in this group. I’m out of here! (Hawkeye storms out of the room.)

Aren’t one of you going to go after him?

Thor: Ha! It’s funny because no one really cares about him. 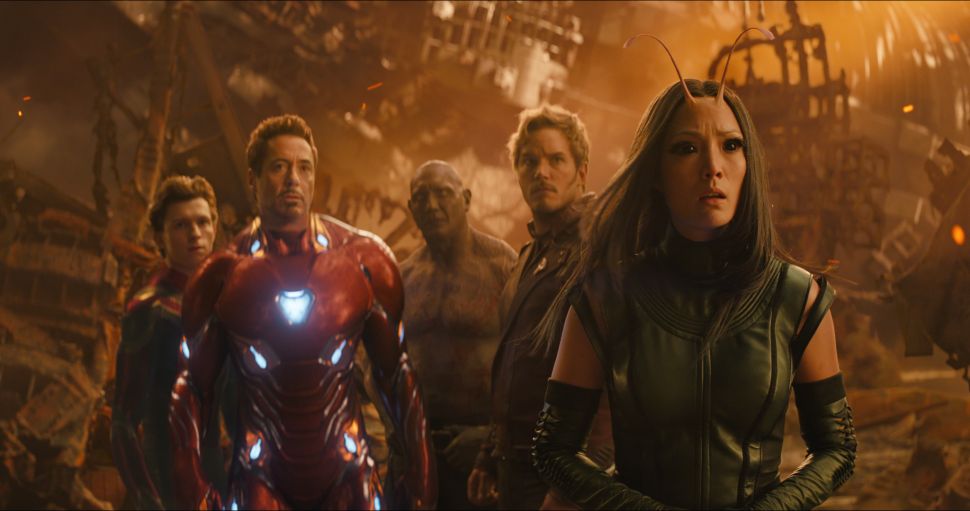