The Montauk home once owned by disgraced financier Bernie Madoff is back on the market. But this time, the oceanfront abode is being offered under less dire circumstances.

The current owners, Vornado Realty Trust CEO Steven Roth and his wife, theater producer Daryl Roth, bought the 3,000-square-foot home for $9.4 million in October 2009, shortly after the U.S. government seized the beachfront property and listed it for sale. It was the same year Madoff was sentenced to 150 years in prison for orchestrating the largest Ponzi scheme, ever.

The profits from the purchase of this summer home went towards restitution for the victims of the disgraced financier; the same was the case for the proceeds from the sale of Madoff’s Manhattan penthouse at 133 East 64th Street.

Madoff and his wife, Ruth, bought the 1.5-acre property at 216 Old Montauk Highway for $250,000 in 1980 and completed construction on the house by 1982. The Roths, however, were not impressed. Daryl told Architectural Digest it was a “dilapidated 1980s residence,” with dated interiors and a kooky layout. But still, the couple was drawn to the home’s coveted 180 feet of ocean frontage. There’s also the wonderful fact that this residence, now on the market for a staggering $21 million, wasn’t even their main summer house—the Roths already owned a property in East Hampton, where they often hosted their children and grandchildren. The duo merely decided that they wanted an extra Hamptons escape, just for the two of them.

Shortly after buying the three-bedroom, three-bathroom retreat, the Roths employed designer Thierry Despont to revamp the interiors—the final result was, of course, revealed in the aforementioned AD spread.

Despont replaced the circular staircase with a more “discreet” design and relocated the front door from the second floor to the first. He also adjusted the floor plan and moved the master suite to the upper level, decorating it with wall treatments and a chandelier. The 25-foot-wide bedroom has two walk-in closets and looks out onto the ocean, with doors leading out onto a private deck. The master bathroom has heated travertine floors, onyx surfaces and a steam shower, but there’s also an outdoor shower on the balcony.

Even though the ocean is right outside the back door, there’s also a gunite pool that overlooks the Atlantic, with a cabana.

A two-story great room features a barrel vault ceiling and a 30-foot-high fireplace, per the listing shared by Corcoran brokers Gary DePersia and Joan Hegner. The entire home is filled with custom-designed furnishings, which are not included in the costly price tag but could be sold separately.

As for why the Roths are parting with their second Hamptons getaway? Well, they’ve actually purchased yet another home in East Hampton, according to the Wall Street Journal, for their guests and any additional family members that don’t make the cut for the main house. As such, the Roths have decided that they simply won’t have time to travel just a few miles further east, to Montauk. 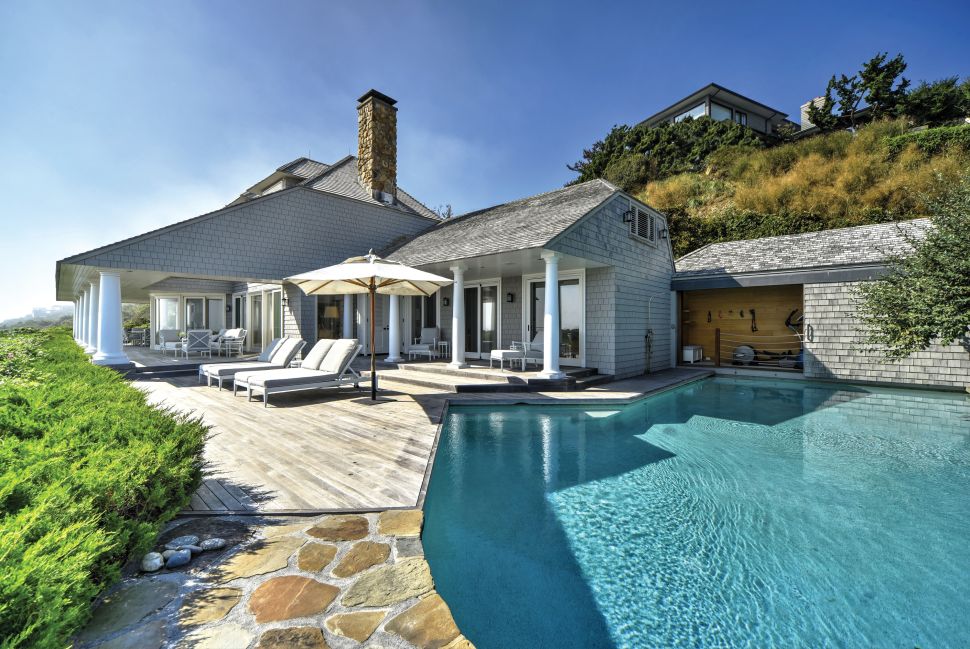