This week, Brazil’s Supreme Court will hear a case that will decide whether the country’s former president, Luiz Inácio Lula da Silva, will be immediately imprisoned. Last week, a lower court decided to uphold his conviction in a corruption case stemming from the infamous and widespread Car Wash scandal, which has already toppled numerous luminaries in the country’s political and business firmament.

The incarceration of Lula, who is leading the polls for the country’s upcoming presidential election, would further upend an already chaotic contest, likely leaving neo-nationalist Jair Bolsonaro—whom Bloomberg labeled “The Donald Trump of Brazil” and Glenn Greenwald of The Intercept called “the most misogynistic, hateful elected official in the democratic world”—as the new frontrunner.

Since 2008’s global financial crisis, many nations have borne witness to the rise of so-called “neo-nationalism” and its spillover into mainstream politics. In some countries, like the U.S., this populist movement hijacked a major political party, forcing it to adopt aggressive stances on immigration and trade. In other countries, like Germany and the Netherlands, right-wing fringe movements centered upon xenophobia, nativism and religious intolerance experienced never-before-seen electoral success.

Though this pattern has been evolving for some time, it wasn’t until the U.K. voted to leave the EU and the U.S. elected President Donald Trump that the mainstream media began referring to this neo-nationalist trend in global terms.

Two decades ago, Fareed Zakaria, writing in Foreign Affairs, penned a seminal essay entitled “The Rise of Illiberal Democracy.” Zakaria argued that while the U.S. and Western Europe paved the way for democracy to flourish on a global scale, they failed to adequately consider how to deal with democratically-elected governments that are “routinely ignoring constitutional limits on their power and depriving their citizens of basic rights and freedoms.”

To be clear, nationalism and nativism have always been part of the global body politic, but they were generally associated with authoritarian strongmen or oppressive regimes well outside the comfort zone of Western-style democracies. It’s only recently that nationalist agendas have made considerable headway in traditional liberal societies.

In the 20 years since Zakaria’s article was published, only one region of the world took a political turn in the opposite direction: Latin America. From Venezuela’s Hugo Chávez to Brazil’s Lula (who Barack Obama famously referred to as “the most popular politician on earth”) to Argentina’s husband and wife presidential duo Néstor and Cristina Kirchner, South American democracies elected leftist regimes in droves.

Many of these left-wing governing experiments were directly related to the commodities boom of the 1990s and 2000s. This “commodity supercycle”—fed by an insatiable appetite for minerals, carbon fuels, and foodstuffs primarily from China—left Latin American economies flush with cash to spend on left-leaning social policies.

But since oil prices collapsed in 2014, these Latin American commodity exporters haven’t fared so well—and neither have their leftists’ governments.

In Venezuela, Chávez is dead and the country is teetering on the brink of civil war.

In Argentina, to combat a runaway inflationary economy, the country elected Mauricio Macri, a right of center politician.

And in Brazil, the country’s massive recession led to a political crisis like none other in its history: Former President Dilma Rousseff was impeached; Rio de Janeiro, which hosted the Olympics and the World Cup in recent years, became a war zone, forcing interim President Michel Temer to declare martial law in the city; and Lula, Brazil’s popular president from 2003 to 2011 who had been staging a political comeback, became ensnarled in corruption investigations.

Lula’s legal travails, which have had more plot twists than a Brazilian telenovela, are ongoing, but last week a regional court rejected his defense’s last-ditch appeal. He could be jailed as early as this Thursday, and he likely won’t be able to run for re-election.

His near-certain removal from the presidential race has opened the door for Brazilian Congressman Jair Bolsonaro. Before last week, Bolsonaro was sitting in second, but with Lula likely out of the race, he is now leading the polls by double digits.

A former captain in the Brazilian army, Jair Bolsonaro is a member of the right-leaning Social Christian Party. He has benefited from the country’s expanding socially conservative population, which feels Brazil has gone too far with its liberal policies. He sprinkles his speeches with references to misogyny, xenophobia, racism and homophobia, and he has offered a tacit endorsement of torture as an official tool of policing. In a country where abortion is illegal and where 50 percent of the population is against same-sex marriage (though it has been legal since 2013), many see Brazil as fertile ground for Bolsonaro’s extremist views.

Since the country’s leftist politicians are all but dead on arrival in the presidential race, Brazil’s only hope for avoiding a Trump-like juggernaut would be if one of the country’s centrist candidates succeeded in galvanizing widespread support. So far, candidates like São Paulo Governor Geraldo Alckmin, who lost a presidential contest to Lula in 2006, have failed to gain much traction. São Paulo Mayor João Doria, former banker João Amoêdo, and television personality Luciano Huck (who has been flirting with a potential candidacy for several months) are the remaining centrist candidates that could gain traction and potentially take on Bolsonaro.

Will Brazil go the way of Trump and Brexit? The world will certainly find out by October 7, when the nation holds its general election. 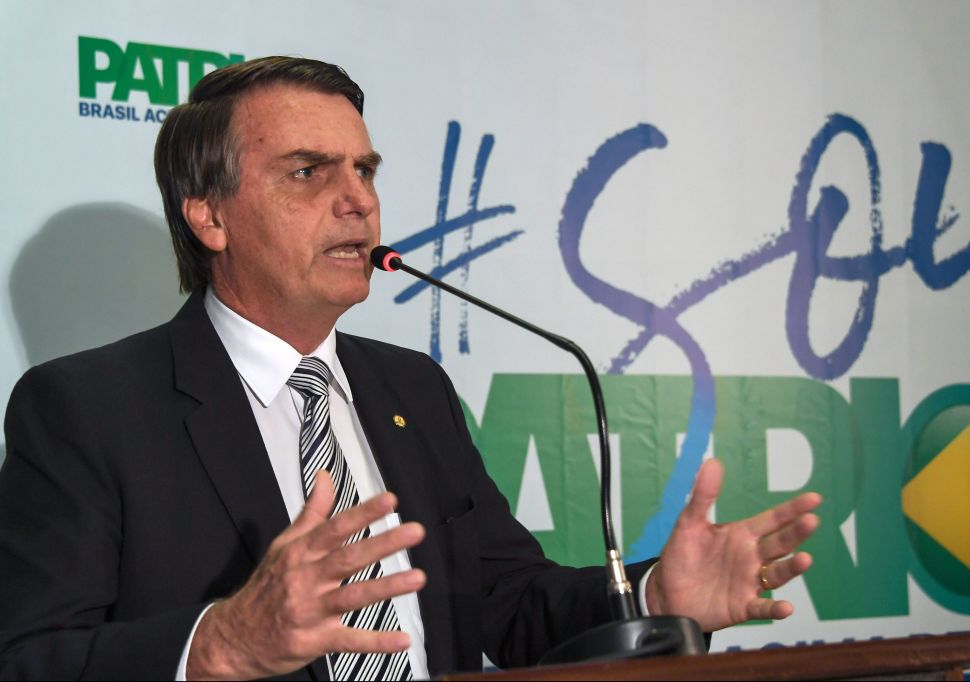