Nat Geo’s recently premiered docuseries One Strange Rock is not your average show about Earth. For starters, is it the first series about our home planet told by the handful of people to have ever left it: astronauts. It also marks Darren Aronofsky’s first foray into TV, as the show’s executive producer. And if that’s not enough of an intriguing combo to hook you in, the unconventional series is hosted by the Fresh Prince himself, Will Smith. Oh, it’s also possibly the most emotional show to premiere this season.

Filmed across six continents and in 45 countries, with exclusive aerial shots from the International Space Station, each one-hour episode of One Strange Rock takes a deep dive into one miraculous feature that makes Earth so special. The premiere, “Gasp,” examines the multiple symbiotic relationships throughout the universe which courier to us the life-sustaining gift that is oxygen. Episode 2, “Storm,” details the random, freak cosmic accidents that occurred over the past few billion years that have directly shaped the world we inhabit today.

And in the same way it’s so much more engrossing to hear a story of a news-making event from a person who actually lived through it—a soldier returned from war, a survivor of an earthquake or a person who fought their own battle alone and won—it’s vastly more impactful to learn about our tenuous place in the solar system from those who’ve seen the planet as none of us have: in its entirety. These (as Smith calls them) “badass” astronauts include Chris Hadfield, Jeff Hoffman, Mae Jemison, Jerry Linenger, Mike Massimino, Leland Melvin, Nicole Stott and Peggy Whitson.

Each of the 10 episodes is anchored by one of these brave space soldiers, Jemison, the first African-American woman to travel in space, narrates two of them. By sharing their own poignant observations on leaving our planet, the astronauts are able to connect to the scientific themes on a personal level, and collectively, the documentary series plays like a beautiful cinematic love letter to Earth from the people who know it on a level of intimacy only achieved by having, at one point, left it. This is Earth as you’ve never heard it described before.

“Every astronaut talks about the planet glowing,” Alice Jones, director and producer Episode 10, explained to Observer. “A lot of them said it radiates life. Jeff Hoffman can explain it [perfectly], the light bouncing off the sun and interacting with the Earth’s atmosphere [creates] this beautiful light—like a shell. It’s why they sometimes call it ‘Spaceship Earth.’ Upon seeing this glow, they look back and say, ‘Hang on, this isn’t just a rock.’ This is an interconnected spaceship that is traveling through space and protecting us. It’s dynamic, with all these complicated workings, and that atmosphere which glows is what allows life to flourish.”

Perhaps because viewers can recall Smith fighting aliens in Men in Black or in Independence Day, or being Earth’s sole survivor in I am Legend, there’s an immediate trust in him as our One Strange Rock narrator. With his cool conversational tone, the Big Willie Style rapper easily breaks down into to layman’s terms the scientific explanations behind the astronaut’s narratives. Like in episode 3, “Shield,” Smith explains, “The sun is not our friend. It’s a planet killer.” Cheesy, sure, but it’s simple and direct for the lot of us who never studied astrophysics.

For viewers familiar with Aronofsky’s directorial projects, his role in a nonfiction TV series might seem like a leap, but in fact it’s more of a natural progression. Everyone has basically agreed (right? Haven’t we?) that his latest film offering, mother!, is an allegory for the destruction of our planet. Working with fellow producer Jane Root (America: The Story of Us), Aronofsky’s passionate admiration for Mother Earth is here much more straightforward.

But rest assured for anyone who wasn’t a mother! fan, One Strange Rock is nothing like the director’s psychological horror movie. Nor is this show a P.S.A. on climate change, or an attack on religious-based storytelling. It’s an epic visual narrative with unprecedented, sweeping cinematography that attempts to give earthbound audiences a sense of the enormity of seeing our home from outside it.

Observer had the chance to speak with former astronaut Leland Melvin, host of episode 9 “Awakenings,” who logged more than 565 hours in space. The one-time Detroit Lions wide-receiver famously brought his jersey along with him into orbit on his first mission, when he traveled to the International Space Station to replace one of its nitrogen tanks. He was the perfect choice for that episode’s theme, so eloquently able to describe his own revelatory moment.

“The first time I looked down, I was filming the tank falling back to the planet, my field of view was focused on getting the footage required, but when the tank went away, I saw the Caribbean. The colors, the ocean. In that moment, I had a perspective change,” Melvin explained. But that was only the start of it. “It wasn’t until [we] floated over and had this meal in the Russian segment. Breaking bread while moving 75,000 miles per hour, with people we used to fight against, it gave me a different perspective on humanity. The planet is not the fragile thing. It’s us that’s fragile. [In space], you learn to have more empathy for others and the condition of the places other people are living. Doing something that’s bigger than yourself, building an outpost for the entire planet, it puts things in a different light. In the bigger picture, we’re all connected on this one strange rock.”

If sentiment in itself doesn’t make you a bit misty-eyed, just wait until its paired with cinematically insane visuals and Will Smith’s ability to pretty much make everyone cry on command. Never thought you’d tear up over a “nature show?” Think again. 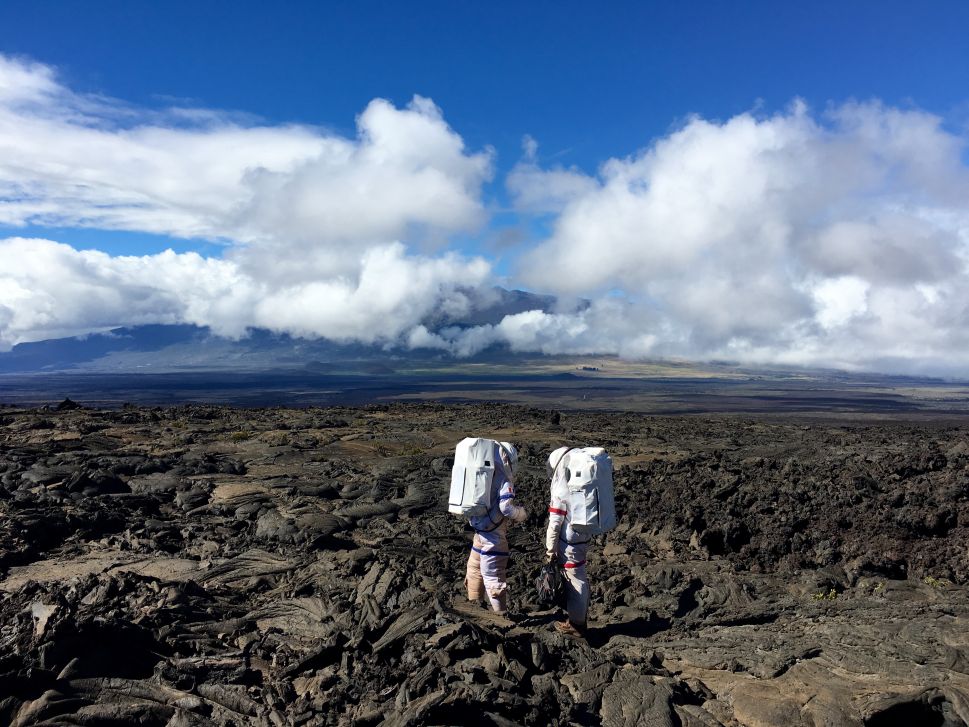