For most of the past 15 years, British artist David Hockney has been living in Bridlington, East Yorkshire, a long way from the studio in Hollywood Hills where he painted some of his most famous swimming pools, though closer to his roots. The abundant and sometimes harsh environment of Northern England has served as inspiration for such landscapes as 2007’s Bigger Trees Near Warter, a mammoth mosaic of 50 canvases, and A Closer Winter Tunnel, February-March, 2006.

It was in his Bridlington studio, in the spring of 2013, that Dominic Elliott, a 23-year-old assistant to Hockney, was found dead after ending a night of partying by drinking toxic drain cleaner. Grief stricken, Hockney and another assistant, Jean Pierre Goncalves De Lima left Yorkshire, seeking refuge in Los Angeles. But the pain lingered and was captured in a portrait Hockney painted of De Lima sitting in a chair, head in hands, caught in a pose and attitude approximating Vincent Van Gogh’s 1890 canvas, Sorrowing Old Man (‘At Eternity’s Gate). The portrait is off-angle, head to toe in a chair, against a blue and green background—a setting which would come to form the basis of a giant series that followed, now the subject of a major exhibition at LACMA: “82 Portraits and 1 Still Life,” on view through July 29.

“When I painted J-P, I mean he was like…” Hockney doesn’t put words to what that emotion was, but his expression, and the body language he captured of De Lima, speaks volumes, “…and I felt like that as well. Then I painted about five or six other ones and then they were just lying around. And I painted a few more and that’s how it started.” The sitters—a collection of the people dear to him and friends from L.A.’s art scene—all are positioned in the same chair against the same blue background, caught with a range of expressions, each one as enigmatic as the last.

Among Hockney’s subjects are celebrities like Barry Humphries, Frank Gehry, art world power brokers like Larry Gagosian and Irving Blum, as well as the woman who cleans Hockney’s house, Doris Velasco, and her daughter, Priscilla. “There’s a real democracy in the lineup,” noted curator Stephanie Barron, who also happens to be featured in the show. “For him, the fellow who washes his car is as interesting as Sir Jacob Rothschild. And there’s no privileging of one over the other. This is a snapshot of the people in his world.”

Portraiture has long been a part of Hockney’s oeuvre, dating to a lithograph he made of himself  in 1954 when he was a just teenager. It was part of the Getty’s show last year of 16 self-portraits made over seven decades. In the late 1980s he rendered a group of his friends in oil; the 90s bore another portrait series of acquaintances, this one in laser print photos. During a 1999 exhibition of works by Jean-Auguste-Dominique Ingres at the National Gallery, Hockney made a group of works rendering museum guards in pencil, crayon and gouache.

Since the 1980s he has worked in series, finding a format and exploring it fully before moving on. Part of what distinguishes Hockney’s portraits is that they are not commissioned, so he isn’t obligated to paint anything more flattering than what he sees. Moreover, these recent ones are not likenesses of strangers, but of people with whom he is personally connected.

“I enjoyed it because I don’t go out much, so having people come up and just talking to them is a much nicer way [to catch up]” said Hockney, whose hearing is severely compromised. “I can’t go out to a restaurant where it’s too noisy. I cannot hear. So, I just don’t go.”

Hockney characterizes the current portraits as drawings made in paint, employing the intense, spontaneity of the former over the more ruminative, leisurely latter. It’s one reason he used a quick charcoal sketch overlaid with acrylic instead of oil (which can take days to dry), allowing him to make adjustments. Together, he thinks of the portraits more like one work of art composed out of 82 canvases.

But why 82? “That was the number that was in the exhibition,” Hockney coyly explained before confessing it’s how many would fit in the Royal Academy show, where the piece debuted in 2016.

And why a single still life? Because when one sitter had to reschedule due to a death in the family, the artist found himself confronted with an empty studio. So, he painted instead some fruit and vegetables on a blue bench. Ayn Grinstein, daughter of Stanley Grinstein and director of legendary artist’s workshop Gemini G.E.L, was the one who called out that day, but she was able to sit for Hockney three days later, baring the grief of her father’s funeral.

“He called the day before the funeral and I knew exactly why we was calling,” Grinstein remembered. “Obviously, David’s close to the family and David was at the funeral. And because of all that, he knew it was going to be a sad painting. I didn’t know how sad it was going to be. But that’s okay.”

#regram from @marcglimcher | Thank you David for an incredible show. – “#DavidHockney: Something New I’m Painting (and Photography) [and even Printing]” is on view now through May 12 at 510 West 25th Street, New York. #SomethingNewinPainting

A mild stroke in 2012 and advanced years haven’t slowed the 81-year-old artist when it comes to his work. Running concurrent with the LACMA show is an exhibition at L.A. Louver through May 14, featuring his iPad drawings from 2009-2012 and several still lifes and a self-portrait. A group of his latest paintings are also on view in New York at Pace Gallery through May 12. Based on a 1920 essay called Reverse Perspective, by Russian philosopher Pavel Florensky, these shaped canvases place the vanishing point behind the viewer.

This latest exploration may in part be attributed to his hearing loss. “I noticed I see space a bit differently,” he confided. “I say it because blind people locate themselves in space around sound. So maybe deaf people get this special spatial sense. I think I’m discovering a lot of things about perspective that I never knew.” 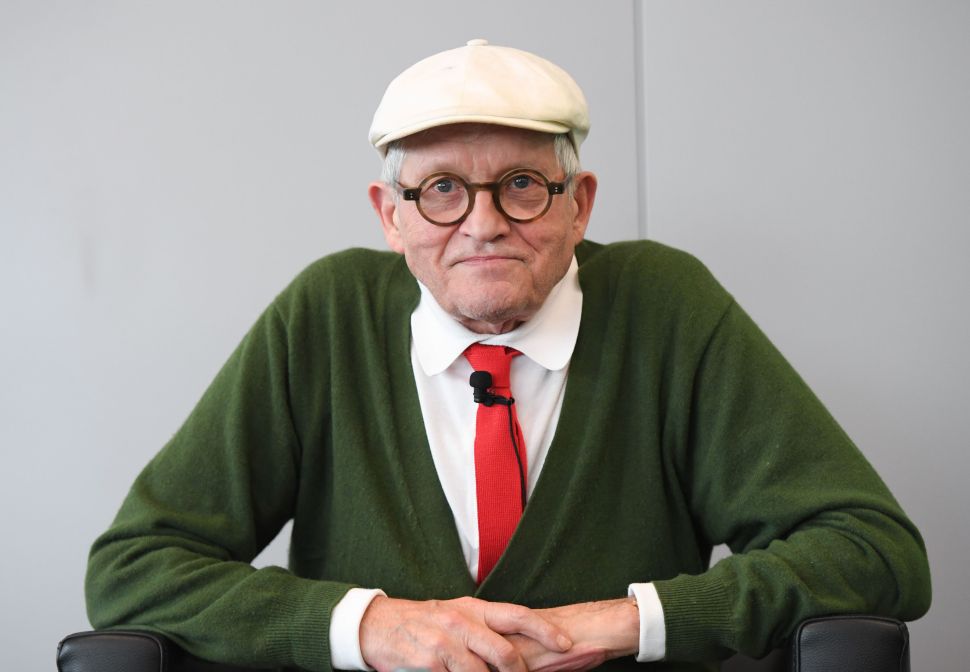