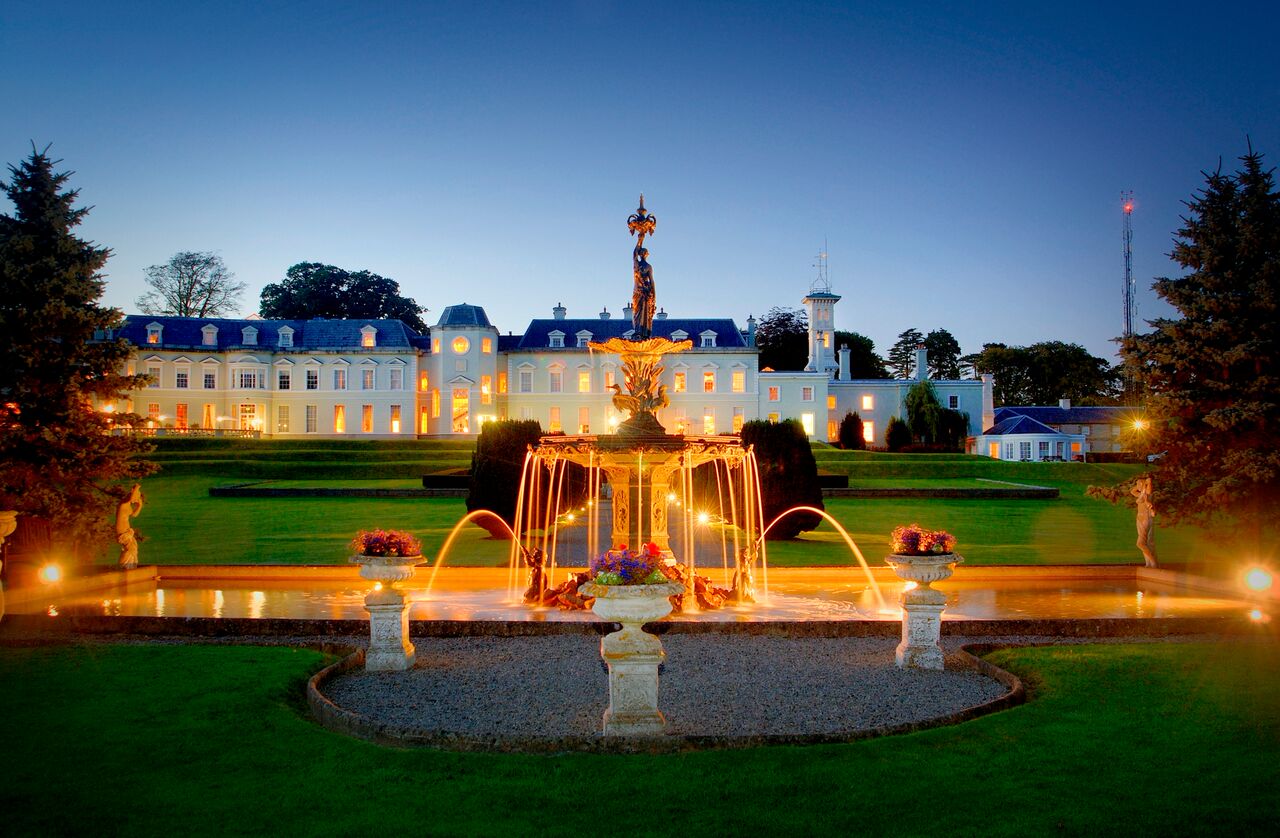 The K Club, 20 minutes outside of Dublin, is extremely popular with celebrities. Courtesy The K Club

In the Irish countryside, only 20 minutes outside Dublin, there sits a house.

A house with a butler to cater to your every need. A house with a harpist to accompany your dinner. A house at which trained falcons and luxury helicopters both fly. A house where Gucci Mane once jogged shirtless through lush gardens and communed with horse statues while wearing every single Louis Vuitton item he owns.

Straffan House is a private mansion owned by the K Club, Ireland’s most luxurious hotel. The hotel and home are owned by multimillionaire Dr. Michael Smurfit, one of the richest men in Ireland. The extravagant five-star hotel is modeled after a French chateau and frequented by rappers, rockstars and royals who find themselves in the area when they’re putting on a concert or need an ultra-private escape, where the only groupies in sight are the ones they hand-selected and voluntarily brought themselves.

When I visited the countryside retreat on St. Patrick’s Day, it felt far removed from the city, courtesy of bucolic pastimes and copious amounts of Guinness (far superior in Ireland, where it’s scientifically proven to taste better). But the hotel’s pièce de résistance was Straffan House, offering a peek into exactly how the one percent lives, when they want to feel considerably fancier than normal.

So how’s this all worth it? Here’s everything you need to know about why Justin Bieber and Prince Albert of Monaco are dishing out $25 large for a night (Biebs stayed for five!) in the Irish countryside. 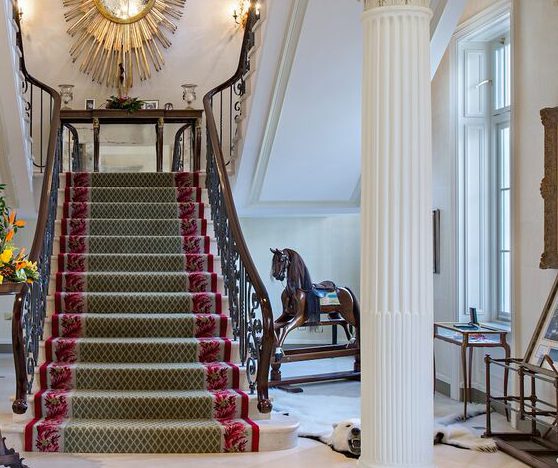 The foyer at Straffan House, where celebrities stay for $25,000 a night. Courtesy The K Club

But First, The Most Important Question: What Exactly Did Justin Bieber Do While There?

When Bieber played Dublin last year, he stayed at the private house with his entourage. His retreat was more than necessary; while he hadn’t acquired a face tattoo quite yet, his tour rider leaked, confirming his diva antics. In the rider, he (allegedly) requested luxury transportation for his entourage of 120 people, two five star hotels for security reasons and a private jet and helicopter nearby at all times, just in case he needed to make a quick escape.

Straffan House is one of the few Irish resorts that would meet the former teen dream’s extensive qualifications, especially since it’s incredibly private, hidden in a gated neighborhood behind double gates and has its own helicopter landing pad. That’s enough to keep out the Beliebers, who he attempted to avoid in Kildare, where the hotel is located.

The lone preserved artifact from his stay is a basketball hoop, which he insisted be brought in so he could beat the people he pays to hang out with him in 21. It now sits forgotten, much like his monkey, leaning forlornly against the otherwise perfect hotel. 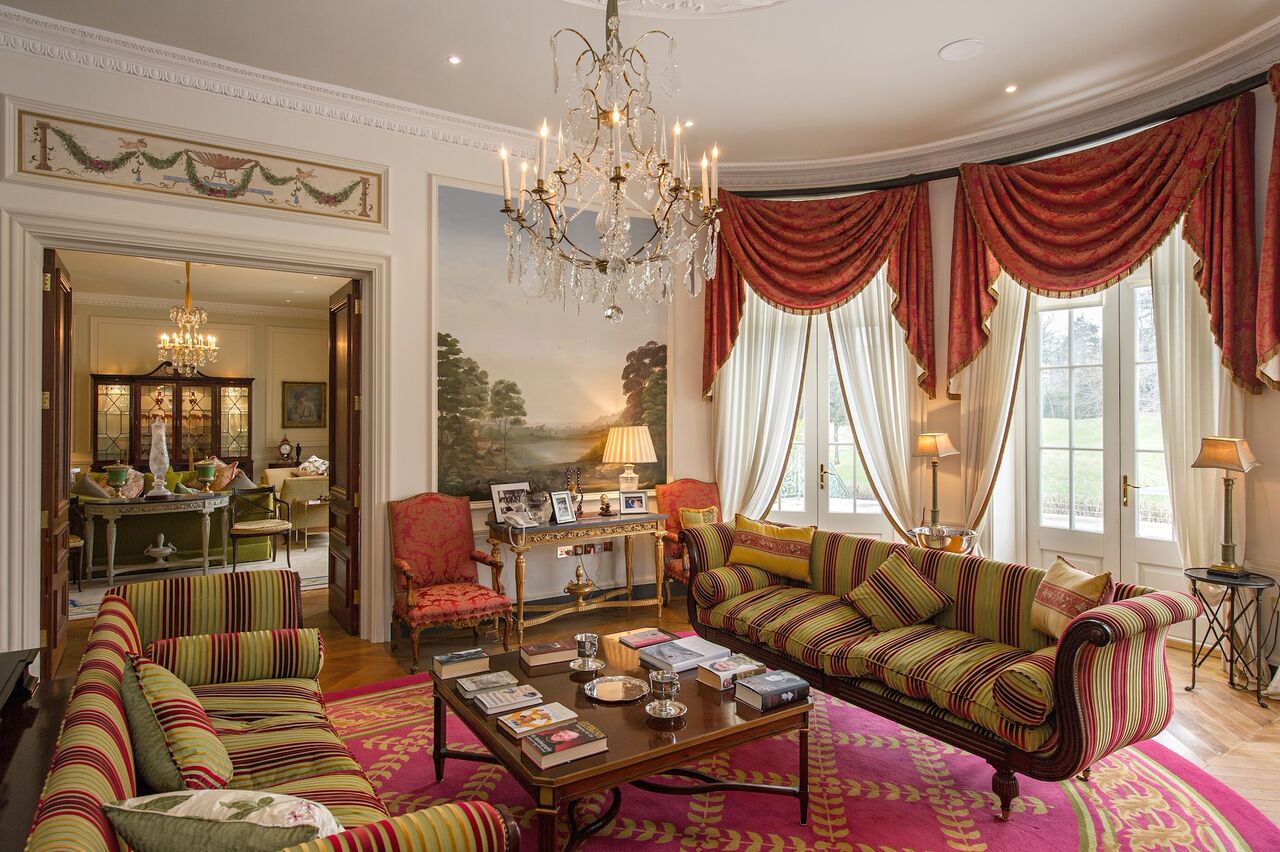 OK, Back to the Reasons Why People Pay So Much to Stay Here: You Get A Personal Butler

The palatial property was built in 2005 to mirror a French chateau near Versailles, with 10 rooms and a connected but separate cottage with two rooms. It’s so private you could easily get away with lead-piping Miss Peacock, but there is a full staff available to assist you.

The butler, Pat (as almost all butlers are named), is available day and night to fulfill your every need, whether it’s breakfast in bed or a European plug adapter, also in bed, because why would you even come here if you weren’t spending a significant amount of time Instagramming, from your bed?

Beforehand, I assumed having a butler would feel disconcerting, but after a while, amidst all the dining-room harping, you simply become used to someone asking how you like your eggs (poached) and describing past guests sliding down the banisters (effectively). 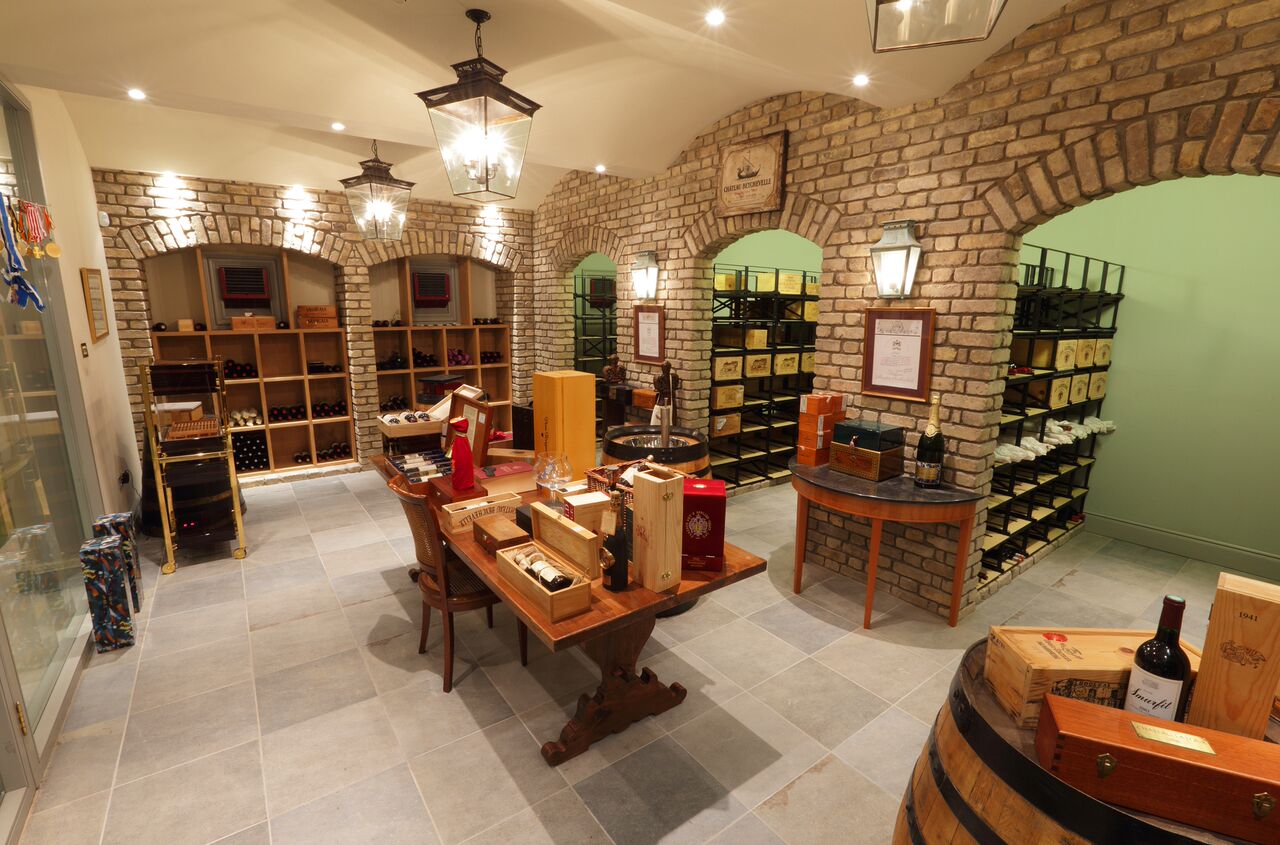 You Can Drink Ireland’s Most Expensive Glass of Wine

Guests can also tour the wine cellar, which houses a collection that dates back to 1928, and is home to the most expensive bottle of wine in all of Ireland: the La Romanee Conti 1990 from Domaine Romanee Conti, which costs 148% more than a night at Straffan House: $37,000. If you’d prefer a glass to a bottle, consider La Tache Drc ‘91 at $2,400. Tours of the cellar start at $62,500 (just kidding, they’re free). 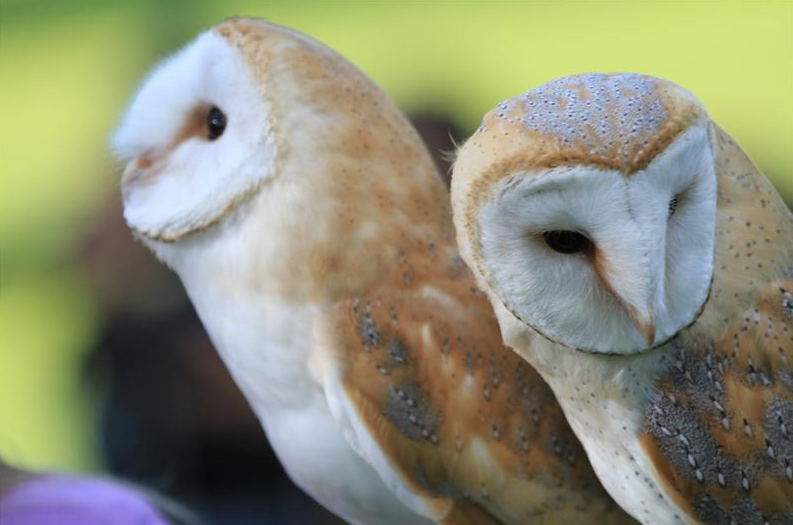 The Owls Do Harry Potter Tricks

Sure, you can go kayaking or ride a horse, but then you might miss the falconry, in which Prince Albert regularly partakes (Bieber, surely too focused on his nifty reverse layup, did not). There are golden eagle, hawks and, as the name implies, falcons. But the gang’s highlighted by a small snow owl very originally named Tiny, who looks just like Harry Potter’s constant companion Hedwig.

Tiny has mastered a nifty party trick, which he shows off at the many weddings on the premises. He zips through two people’s clasped arms, then zeroes in on the camera, where his owner, Brian, displays uncooked meat to tempt him. I outstretched my arms and waited for Tiny’s entrance before I realized he wasn’t coming to visit me. I had no uncooked meat. 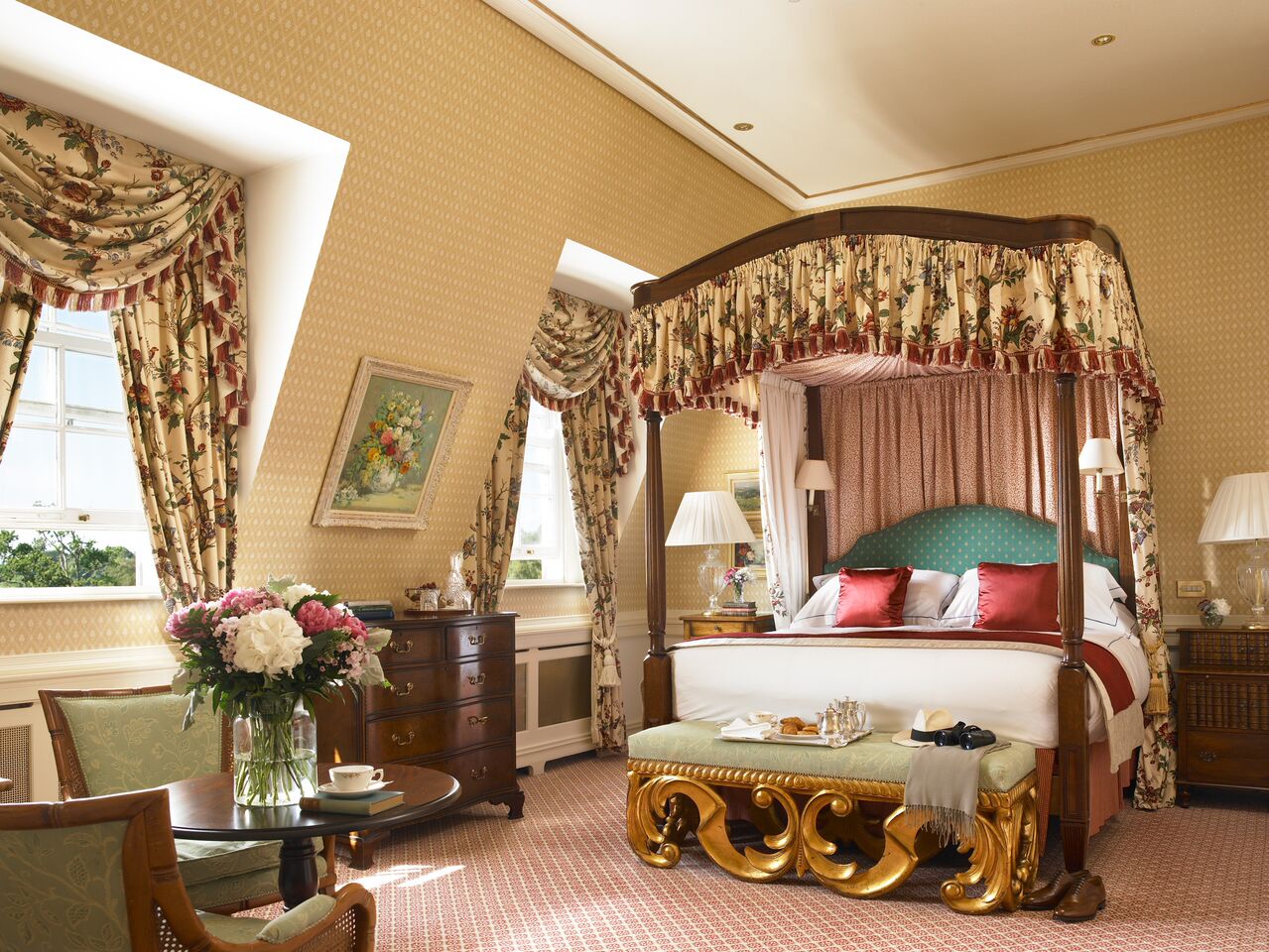 The Imperial Suite Bedroom at the K Club. Courtesy The K Club

The Rest of the Celebrity Clientele Is Entirely Unexpected

Tiger Woods was a guest in the days leading up to the Ryder Cup. Justin Timberlake, One Direction, the Spice Girls, Ozzy Osbourne, and not one, but two presidents—Bill Clinton and George W. Bush—have also visited the hotel. Clinton liked the hotel so much he was rumored to have bought a duplex apartment on the property in 2003 so he could golf.

The Eagles (not to be confused with the falconry expert’s terrifying pets) also stayed in between an American and European tour when they weren’t speaking, and the spacious resort meant they didn’t need to communicate at all. 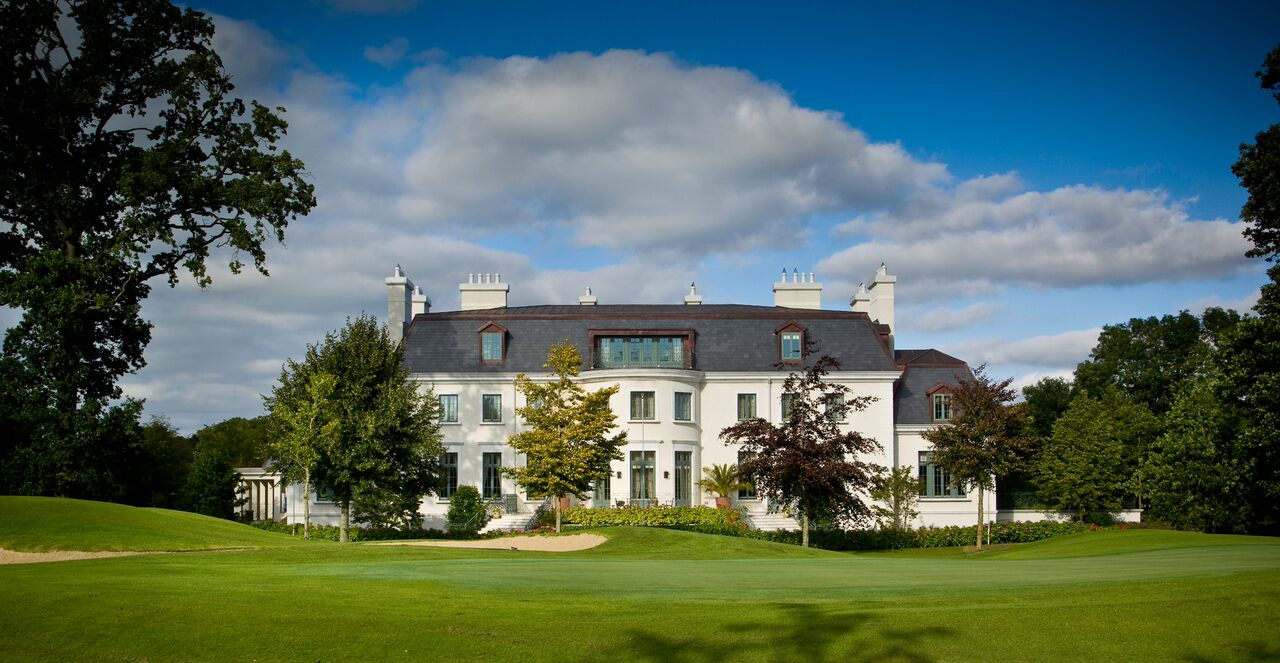 Welcome to your new home. Courtesy The K Club

The hotel’s 190 residential properties are extremely popular with Irish celebrities. When I heard a socialite named Pippa lived nearby, I automatically assumed it was Ms. Middleton, wearing her iconic white dress and flitting about. But no! It’s actually Ireland’s most famous lifestyle blogger, Pippa O’Connor, who has been documenting her K Club home’s redesign extensively on social media, offering daily looks inside her mega-mansion.

It’s also rumored that Conor McGregor lives in one of the residential houses on the resort. The Independent reported that his neighbors weren’t exactly pleased with his presence, probably because, unlike Pippa, he hasn’t been Instagramming his beautiful bedroom. 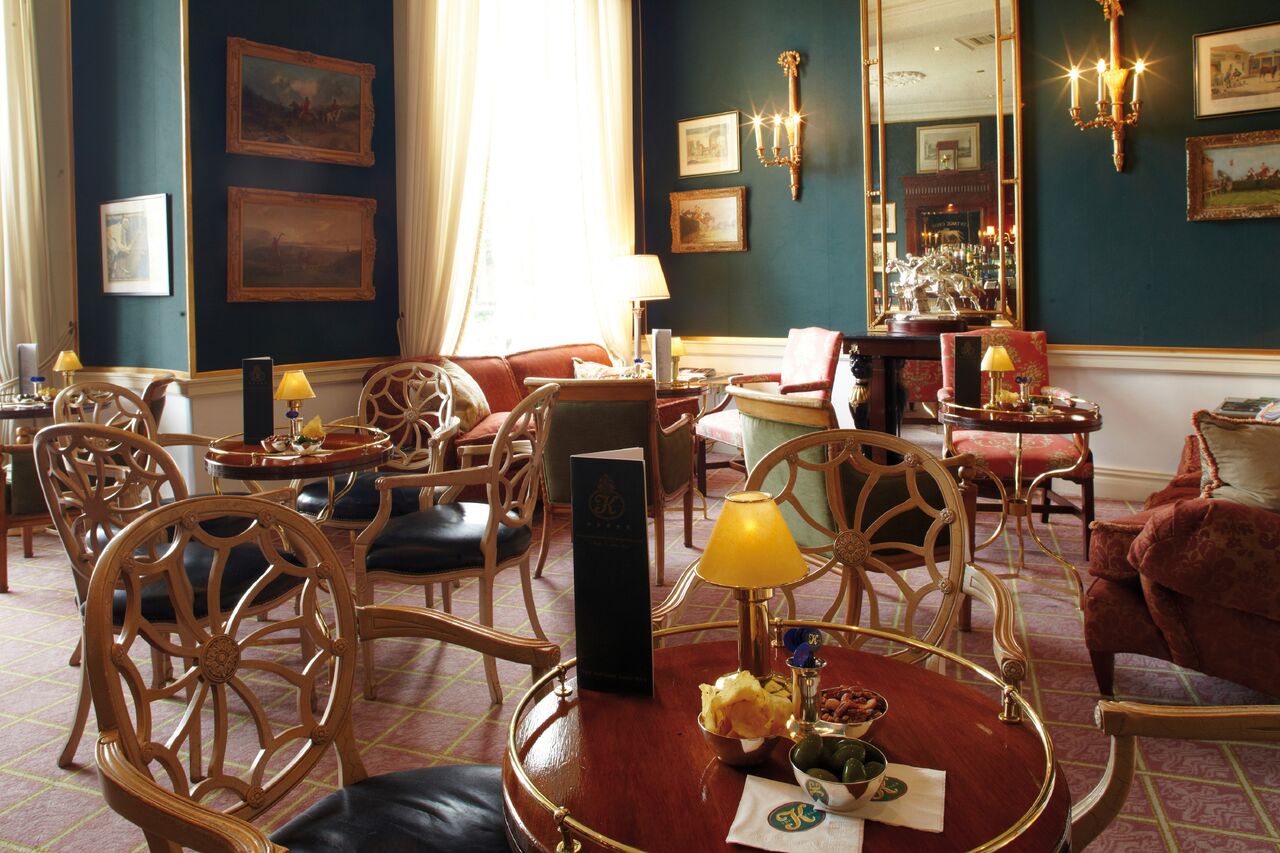 Dr. Smurfit—who 1) uses the Straffan House as his private, home, 2) photographic evidence proves used to look like The Nanny’s Maxwell Fine, and 3) I lovingly referred to as Dr. Smirnoff throughout my visit —is an avid horseman. He actually named the hotel’s restaurant Byerley Turk after one of the stallions who created modern Thoroughbred horse racing bloodstock.

He also had his Melbourne Cup-winning race steed Vintage Crop buried on a small island that’s part of the property, after calling the groundskeeper in the middle of the night to dig a grave worthy of the thoroughbred. Other family pets have been buried in the animal cemetery over the years, including cats, dogs and even birds. If the enormous grave isn’t enough to entice you, the island’s far less morbid fairy homes, an Irish tradition, should do the trick. The fairy walk is particularly popular with small children, although I enjoyed it thoroughly. 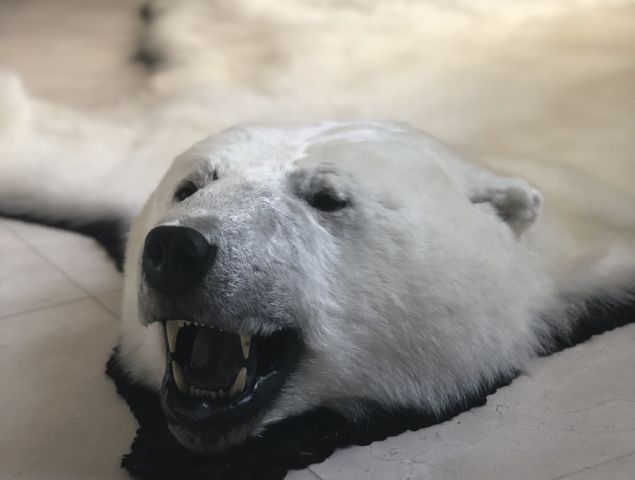 Channel your own (pop) prince. Courtesy The K Club

Did I Mention You Can Lie On the Same Polar Bear Rug as Justin Bieber?

Oh yes you can. 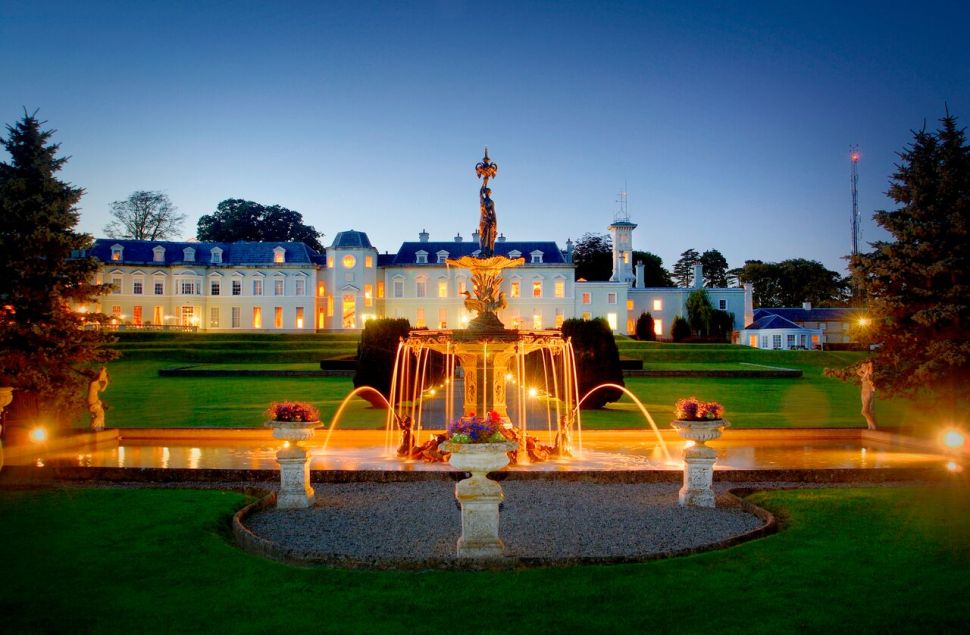