I met Kirstjen Nielsen, President Donald Trump’s recently installed secretary of Homeland Security, in the Fall of 1990. We were both freshman attending Georgetown University’s School of Foreign Service, a Jesuit institution built on the foundation of the science of diplomacy, global understanding and cross-cultural sensitivity. At Georgetown, Nielsen always identified as a Republican, but more of the Bob Dole ilk—moderate, thoughtful and considered. She was an avowed internationalist—the free trade, open borders kind. She focused on Asian studies and even spent some time studying at the Nazan University in Japan.

Now she is Trump’s border czar. DACA, The Wall, mass deportations—these highly controversial issues all cross her desk. And in her short tenure as our nation’s protector-in-chief, Nielsen has taken a number of actions and made some puzzling remarks that make me think her moral compass is in need of some urgent recalibrating. I am concerned that, in her effort to stay above in the Trump White House’s chaotic storm, she let her sense of right and wrong float adrift.

AMC’s hit crime drama Breaking Bad chronicled the downward moral journey of Walter White, an overqualified high-school chemistry teacher who put his lab skills to use to produce crystallized methamphetamine to pay his costly cancer treatment bills, only to discover that he had a penchant for a life of crime and deceit. Over five seasons, Walter transforms into an international drug kingpin. What started off as an illegal yet morally defensible set of actions spiraled into an inescapable web of villainy and vice.

Since Trump appointed Nielsen as Gen. John F. Kelly’s replacement to head the Department of Homeland Security, I have been alternately shocked and appalled at how this woman, who I know as a smart, highly principled and ethically grounded professional, has been either seduced or coerced into defending the indefensible, prevaricating, or remaining silent on issues where the voice of reason must be heard.

By comparing Nielsen to Walter White, I’m not suggesting she’s involved in any illicit activity. However, her actions—from her lame debut on the national stage, where she awkwardly danced around whether or not she heard the president refer to Haiti and a host of African nations as “shithole countries,” to her decision to suddenly cancel the status of 200,000 law-abiding Salvadorans who’ve lived legally in the U.S since 2001—have earned Nielsen the sobriquet of “One of President Trump’s Fiercest Loyalists.”

I found myself asking, “Is Kirstjen Nielsen on a path of ethical and moral descent similar to that of Walter White in Breaking Bad?” I ask this because I knew Nielsen, quite well actually.

After graduation, I moved to Brazil to continue my post-graduate studies while Kirstjen stayed in Washington, getting a job as a legislative aide to former Republican Congressman Connie Mack III, who represented Nielsen’s hometown of Clearwater, Florida.

Time passed, and we gradually fell out of touch, but now, years later, it’s difficult to reconcile the Kirstjen Nielsen who I sat beside in many classes at Georgetown with the deeply committed Trump apologist she appears to be now.

The Edmund A. Walsh School of Foreign Service (SFS) is arguably the world’s most celebrated institution for international relations. Its roster of alumni is a “who’s who” of global business and politics: Bill Clinton, King Felipe VI of Spain, King Abdullah II of Jordan, and scores of other presidents, prime ministers, and global titans of industry. It’s a small and intimate program—there are only several hundred students in each graduating class—so everyone gets to know each other.

Nielson grew up in a tiny neighborhood in the Tampa Bay area and is the daughter of a prominent local ophthalmologist. After Georgetown, she got a law degree and moved back to Washington, D.C. to begin a career in and around government. She gradually became an expert in emergency management and cybersecurity, which eventually landed her a cushy a job in George W. Bush’s White House as a liaison with the Department of Homeland Security. When Trump appointed John F. Kelly to head the department, the former general made Nielson his chief of staff at DHS. And only a few months later, after Trump forced out then-Chief of Staff Reince Priebus, Kelly moved over to the White House and Nielsen joined him as White House deputy chief of staff. Kelly eventually lobbied to install Nielsen as his permanent replacement at DHS.

When I learned of her appointment at DHS, I was relieved: Finally there would be a sensible voice on immigration and border security in the Trump administration. But in the few months since she’s been on the job, Nielsen has done nothing but disappoint. Some reports suggest she is more of opportunist than an ideologue. She has cultivated alliances with scary White House figures like Stephen Miller, who narrowly views DHS as a political vector for advancing a populist-driven crackdown on immigration.

Nielsen must not feel very secure in her job because she is bending over backward to defend the president. Last week, on the topic of the Mexico-California border, Trump sent out a rather unclear tweet—one that could easily be construed as race-baiting. He referenced the notion of Latin American criminals “breeding” within our borders. One would think senior administration officials—especially the secretary of Homeland Security, who oversees all things immigration and border related—would at least attempt to spin the president’s words and state, unequivocally, that he did not mean to further stir the pot of racial stereotyping after his infamous “rapists” comments. But the secretary was silent on the “breeding” comment, stating simply that she couldn’t speak “to a particular meaning of the tweet.”

It is precisely this type of reaction from Nielsen that leads me to believe she is valuing self-preservation in Trump’s orbit over doing what’s morally and ethically right. She seems blind to the fact that if she were to forcefully counter some of the president’s more abusive comments and challenge him to take a more balanced approach on immigration and DACA, she could carve out her own unique power base within the administration—not to mention stay true to her inner sense of right and wrong.

Cozying up to Trump and Stephen Miller is not a wise long-term strategy. Kirstjen Nielsen is only 45 years old, and she has many years left in her career. She would be smart to break with Trump when he’s wrong and either force a change in policy for the administration or bait the president into forcing her out. Either way, she would be on the right side of history.

For now, all I see is a scene reminiscent of Breaking Bad. 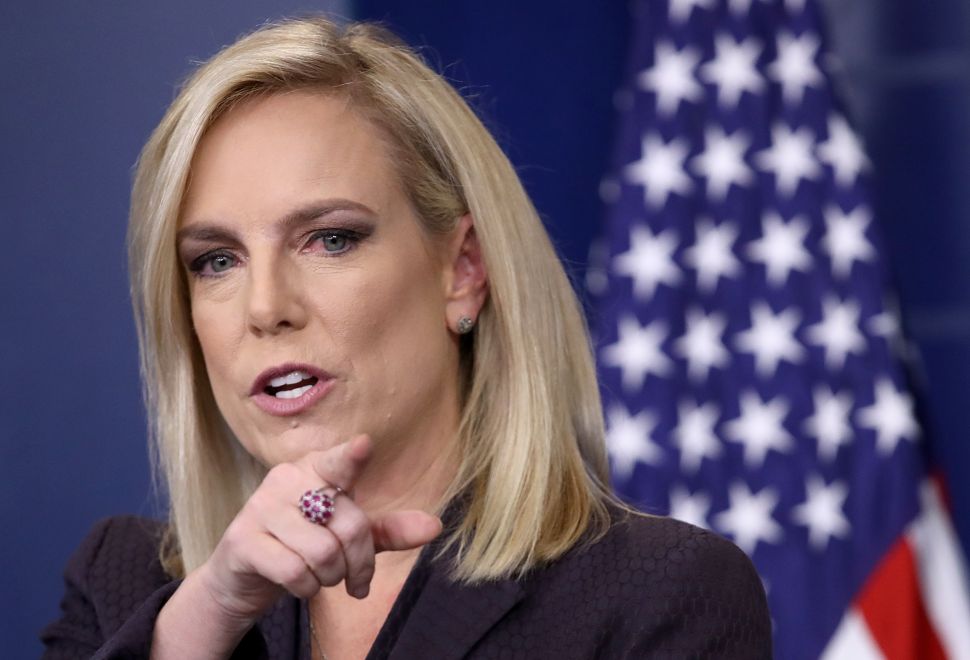