GUEST: Wow, thank you so much. You know, it’s funny. I’ve heard about this place for years and I still don’t know fully what it is.

FORD: Impossible. You would need an entire volume of encyclopedias.

GUEST: Something that transcends language, in other words?

FORD: Well, I wouldn’t go quite that far. It’s a…place. Where my scientists and engineers have created immensely elaborate artificial intelligence that—

OTHER GUEST, RETURNING FROM WESTWORLD: Listen, it’s an amusement park where people kill and have sex with cowboy robots.

FORD: No! God, that’s so crass. This is an almost indescribably complex world where—

GUEST: So nobody’s having sex with or killing robots in there?

FORD: Well, I mean, yes, some of our guests do occasionally indulge in unspoken vices that could—

GUEST: Ok so basically you made a Disneyland for adults to pretend to be cowboys in the Wild West. Only there’s robots and you can kill them.

FORD: When one considers the most profound questions in human history—What is existence? What is consciousness?— then one must naturally—

THE MAN IN BLACK: My journey has only just begun. There’s another level to this place.

GUEST: Yeah, for sure. Sometimes I think I’m just a guy pretending to be a cowboy in a theme park for the super rich to come take their mind off things by going on adventures, but then I remember: I can also kill robots while I’m here.

THE MAN IN BLACK: You must be new here.

GUEST: I am, and I’m having the time of my life.

THE MAN IN BLACK: When I first came to Westworld, years and years ago, I met a woman. But she wasn’t a woman at all, because—

GUEST: She was a robot?

THE MAN IN BLACK: Please let me finish. Yes, she was a robot, but—

GUEST: You fell in love with a robot, man, it happens.

THE MAN IN BLACK: Yes, I suppose, technically, but I’m telling you there’s another level to this place.

GUEST: Like other worlds? Like this is Westworld but there’s also a Samurai world, and so forth?

THE MAN IN BLACK: I…hadn’t considered that.

FORD: So, did you enjoy your visit to Westworld? Though forgive me, “enjoy” is probably far too light of a word.

GUEST: Hell yeah, it was awesome. I loved it.

FORD: I hope the uncanny valley between man and machine did not shake you to your core too violently.

GUEST: Not at all. I mean sometimes it was weird because I would be, like, interacting with someone and then there’d be a moment where I was like “Oh wait, this is actually a robot.”

FORD: It can often be…disorienting…to see firsthand that mankind is not unique. That we can create stronger, smarter, and more versatile versions of ourselves. It’s proof positive that we’re nothing more than a brief iteration in a grander, longer process to achieve total perfection.

GUEST: I killed 15 robots in Westworld and had sex with two. It was so much fun.

FORD: You seem incapable of grasping the larger implications of what we’ve created here, and for that I can only pity you.

FORD: The gulf between our perceived significance as both an individual and a collective species, and the essential emptiness of all phenomena is more profound and vast than any of us can fully grasp. That is what we’re proving here in Westworld. And as the creator of Westworld, I’m forced to confront one of the most morally ambiguous questions of all: Having essentially created life—fully autonomous, intelligent life—what responsibility do I have to it? 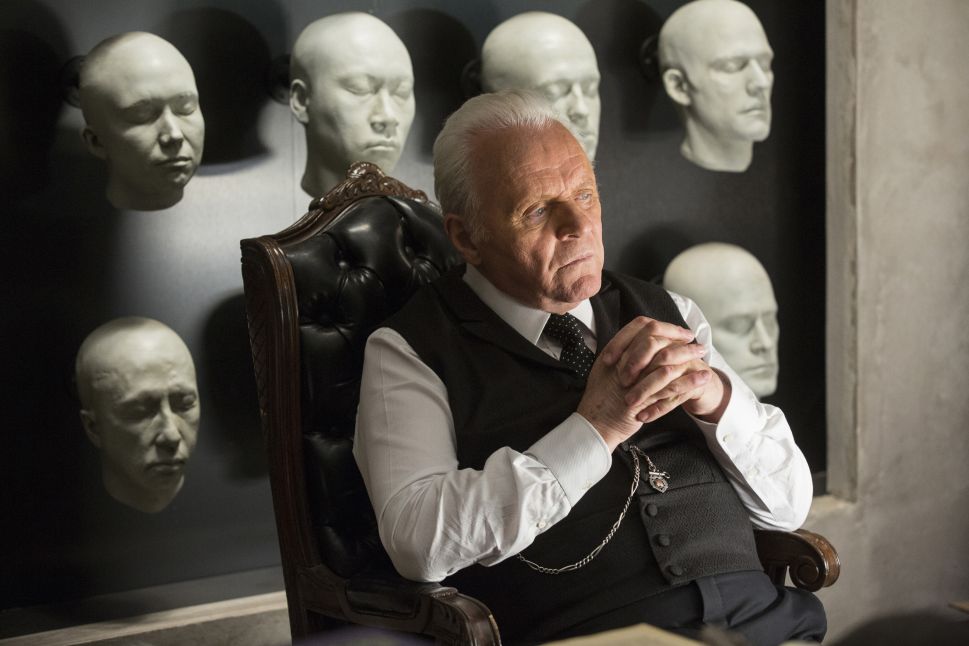