You are aware that James Comey—the former FBI director whose eagerly awaited book, A Higher Loyalty, sits atop the Amazon best-seller list—played a role in the events that led to Donald Trump living in the White House.

You know that by telling Congress 11 days before the 2016 election that the investigation into Hillary Clinton’s e-mail server was still alive, Comey laid a very heavy finger on the scale. You know this, which means you are more perceptive than Comey.

“It is entirely possible,” Comey muses, that he broke one of law enforcement’s cardinal rules and blabbed about an investigation at the most sensitive time imaginable, because to do otherwise would risk “making [Clinton] an illegitimate president.” Yes, James Comey is certain, this could be. “I don’t remember consciously thinking about that, but it must have been,” Comey told ABC’s George Stephanopoulos during his media blitz promoting the book. “I was operating in a world where Hillary Clinton was going to beat Donald Trump. I’m sure that it was a factor.”

This critique tumbles headlong and accidentally into what will probably become the book’s enduring message: Nearly a year removed from the job, the former director of America’s domestic intelligence-gathering and criminal investigation agency doesn’t have any noteworthy forensic theories or detective’s hunches.

On Russia, on the pee tape, and on what we should do about the authoritarian circus running the country, James Comey doesn’t really have all that much to say.

According to him, his book is about “ethical leadership”—a more pious and more boring variation of the treatises on mindsets and effective habits occupying places of honor on middle managers’ office shelves. Such books don’t generally sit atop the Amazon best-seller list of the day of their release, as Comey’s does. This is a sign of how much hope we had for this book and for Comey, elevated to the level of a righteous martyr following his certainly politically motivated sacking last May at the hands of Donald Trump.

Speaking of—those hands! Boy, are they are small—well, “smaller” than Comey’s, he writes. And! They are the appendages of a man whose skin is orange, whose hair is real, and who appears to be a regular on the tanning bed.

Also! Donald Trump isn’t very good—he is, in fact, uniquely unqualified to be president. “This President is unethical, and untethered to truth and institutional values,” Comey writes, channeling the spirit of a National Review columnist, circa August 2016. “His leadership is transactional, ego driven and about personal loyalty.”

“It is… wrong to stand idly by, or worse, to stay silent when you know better, while a president brazenly seeks to undermine public confidence in law enforcement institutions that were established to keep our leaders in check,” writes Comey, who once tried to blend in with the White House curtains to avoid having to talk to the president (it failed; Jim Comey got a big Trump hug).

But listen, this Trump fellow, he’s not all bad. He’s got a brain. “I don’t think he’s mentally unfit. I’ve read stuff about dementia and what-not,” Comey wrote. “I don’t buy that… That’s not what I mean. I actually believe he’s morally unfit to be president.”

In someone else’s hands, this could be something. In another century, the road toward presidential impeachment was paved with moral failings. Not for James Comey, who just wants you to vote. Trump’s undoing, he writes, will be at the ballot box in 2020.

As for the Russians, the Steele dossier, and the fabled “golden showers” in Moscow—something Trump asked the former FBI director about time and time again, as if he had something to hide—James Comey, who swung an election and who was privy to the kind of “deep state” information and insight that Robert Mueller is chasing after, isn’t jumping to conclusions.

In his world, the world where he found himself outfoxed and boxed out by an impulsive individual with naked motives and no reputation as a strategic thinker, anything is possible—except an explanation. 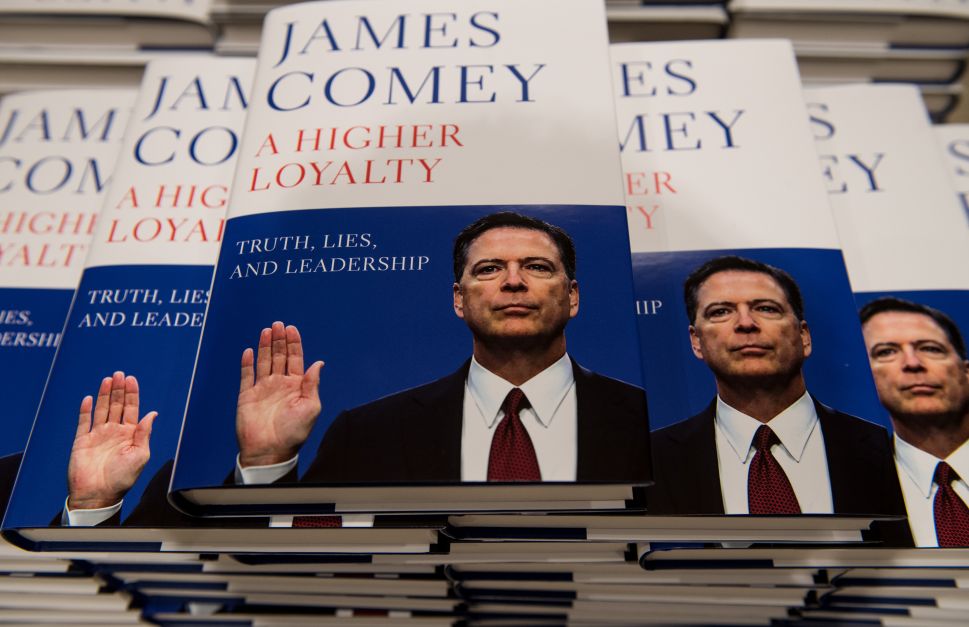