Near the end of James Comey’s televised conversation with George Stephanopoulos on Sunday night, ABC showed a promotion for a coming episode of a show called Designated Survivor.

A brief clip from the next episode showed what appeared to be the cabinet invoking the 25th Amendment to remove “President Kirkman” from office.

Moments later, Stephanopoulos asked his most dramatic question of the night to Comey and the former FBI director—fired by President Donald Trump last year—gave his most explosive answer.

STEPHANOPOULOS: “Is Donald Trump unfit to be president?”

Comey went on to cite Trump’s “moral equivalence” between white supremacist demonstrators in Charlottesville, Va., last summer and those who protested against them, including one woman run down and killed by a car.

He also said Trump “talks about and treats women like pieces of meat” and that Trump “lies constantly about matters big and small and insists the American people believe it.”

Perhaps it was just a coincidence that ABC edited its five hours of conversation so that the best stuff came in the last five minutes of the one-hour show and right after the fictional cabinet coup against an unfit chief executive.

Now that Comey has opened his book tour with a friendly questioner, he should consider visiting the reptiles in the cable news swamp to promote A Higher Loyalty to the right-wing audience. He could talk to the prime time “opinion hosts” of Fox News Channel.

At 8 p.m., on Tucker Carlson Tonight, Brother Tucker could mock Comey and giggle at him and accuse him of being the sort of “leftist” who favors “open borders” and “sanctuary cities” for “criminal illegals.”

At 9 p.m., on Hannity, Trump alpha fluffer Sean Hannity could tell Comey that he threatens our brave military, our heroic police officers, our robust economy, our traditional values, our U.S. Constitution, our price of gasoline, our gun “rights,” our American flag, our National Anthem and You The American People.

And at 10 p.m. on The Ingraham Angle, Church Lady Laura Ingraham could tell Comey he deserved to be fired by Trump because he, Comey, is a heretic who must be burned at an extra-long stake. (“Now, Jimmy, won’t that be special?”)

Alas, on upcoming appearances, look for more chatter like what we saw and heard Sunday night when Comey told Stephanopoulos about what it was like to dine in the White House with Trump when Trump demanded an oath of loyalty.

One of them was that Trump’s inauguration crowd was bigger than that of President Obama, something Comey said was factually untrue.

STEPHANOPOULOS: “Are you thinking ‘President Trump’s a liar?”

Comey, in his too-earnest-by-half way, comes across like the well-meaning but bumbling umpire at your kid’s Little League game who knows all the rules and looks the part but makes bad judgment calls against both teams.

Comey’s announcement that the FBI was re-opening its Clinton investigation was one of several significant reasons the Democratic candidate got upset by Trump less than two weeks later. At that same time, Comey refused to reveal an investigation into the Trump campaign that continues now under Special Counsel Robert Mueller.

“Slimeball!” Trump belched at Comey on Sunday during another morning Twitter tantrum.

And while Trump and his apologists try to paint Comey as a partisan liar, excerpts from A Higher Loyalty and his comments on ABC reveal Comey as merely a pedantic and self-righteous truth-teller, a dutiful Dudley Do-Right battling Trump’s version of Snidely Whiplash.

He was asked how he felt after sabotaging the Clinton campaign by announcing the re-opening of an investigation of her emails.

“It sucked,” Comey said. “I walked around vaguely sick to my stomach, feeling like I was totally alone and everybody hated me and that there wasn’t a way out because it really was the right thing to do.”

Certainly Comey’s firing by Trump last year—(and what knucklehead White House advisor would even suggest such a stupid thing?)—was a pivotal event in a growing criminal probe. Comey had a big role. His timely book will sell well.

But now, with the FBI busting Trump fixer Michael Cohen last week, the investigation has moved well beyond Comey. It could topple Trump’s regime and send people to prison.

When history writes the definitive chapter about the scandals of the Trump era, Comey’s A Higher Loyalty will be remembered ultimately as a mere sideshow, just another telling episode—like the “Trump University” fraud, the Cabinet purges, “The Wall,” Omarosa, the Muslim ban, the porn-star payoff, the Charlottesville disgrace, the lies, the insults, that White House aide accused of abusing two wives, the Playmate payoff, and Trump’s bragging on audio tape about how he, Donald Trump, likes to greet attractive but unfamiliar women by kissing them without warning and grabbing them by the crotch.

Perhaps, now that the feds have Cohen’s voice recordings, the long, sticky fingers of American law might be about to grab Trump by his very own crotch. 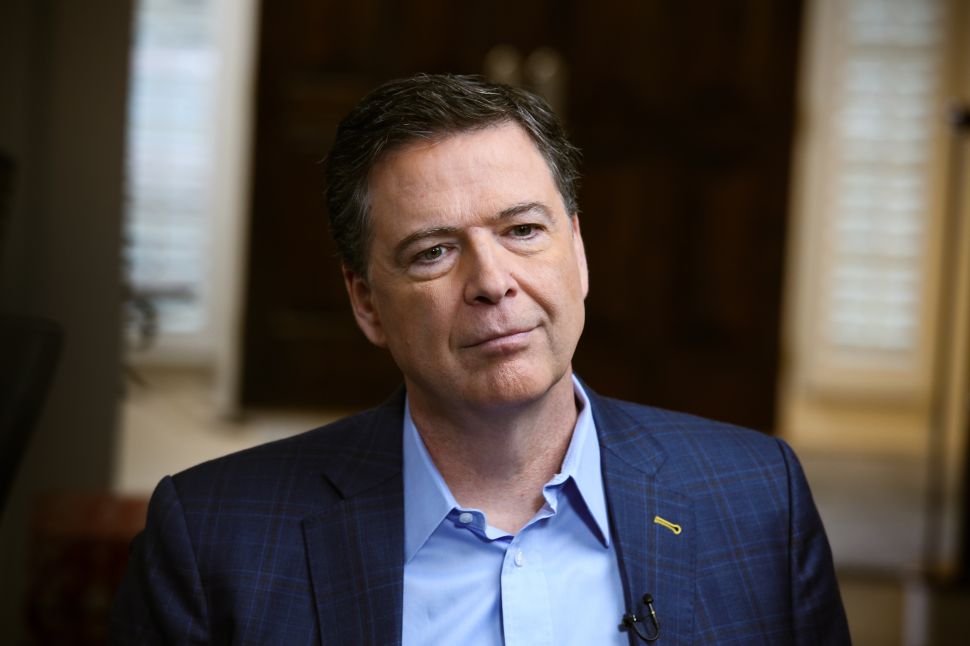