A metaphor that can capture the dramatic about-face performed this week by John Boehner—the hard-core conservative former Speaker of the House of Representatives, who’s now on the board of a legal marijuana company—may not exist.

A Koch brother renouncing petroleum and living a carbon-neutral life. Richard Spencer at a Black Lives Matter march. Steve Bannon on the steering committee of the local Democratic Socialists of America. A metamorphosis, a one-eighty.

Whatever. The description isn’t nearly as important as the forensics, and the meaning. This, you see, is a trend piece.

Boehner, the reliable and adamant opponent to anything resembling marijuana reform during his time running Congress, now believes legal cannabis can work for him. And why not? How many billions of dollars are on the table in this game? Many. Several. And Boehner thinks he can grab a handful.

Terms of Boehner’s deal with Acreage Holdings, a relatively new New York City-based outfit with “cultivation, processing and dispensary operations” in 11 states, were not disclosed. But seeing as how Boehner, a notable cigarette aficionado, joined the board of Reynolds Tobacco for $400,000 a year after leaving Congress, they’re probably kind.

Nobody has to like this development—and many in the marijuana industry rightly don’t, and have publicly called for Boehner to lobby Congress for better laws rather than hop on the weed-powered gravy train—but for their own sake, they should get used to it. Cynical, opportunistic moves like this are going to be a feature of the marijuana industry for the foreseeable future.

Boehner’s explanation is that his thinking “evolved” sometime between now and 2011, when he declared he was “unalterably opposed” to legalization. He saw a friend with back pain use weed and feel better. He realized that when you ponder arrest and prison statistics, “you begin to really scratch your head.” This is vacuous self-serving nonsense, so lame as to be nauseating.

You will note that in the last seven years, there were no grand revelations, no stunning scientific breakthroughs, no watershed moment when humanity realized cannabis was actually good and not extremely bad, as the U.S. government currently classifies it. All the necessary information for a reasonable, thinking person to draw the conclusion Boehner reached today was available to him then—at the time when he could have done something substantive on cannabis—just as it was to television doctor and actual surgeon Sanjay Gupta, who did much to mainstream cannabis in his 2013 CNN special “Weed” (once Gupta figured out he wasn’t ever going to be surgeon general).

What did happen is that Boehner left Washington politics, where, up until fairly recently, the only stalwart voices for marijuana reform on the Republican side of the aisle were libertarian weirdos like Rand Paul and possible Russian assets like Dana Rohrabacher—and all this, despite something close to 94 percent of Americans thinking that it might be time to abandon Nixon-era marijuana policies.

It’s absolutely true that Washington needs more conservative voices calling for cannabis reform, as NORML executive director Erik Altieri, told the New York Times—but any sentient person can see that Boehner, out of office for years and never close with the Trump wing of the party to begin with, is not going to be the person to change the minds of Attorney General Jeff Sessions, Sen. Chuck Grassley, Rep. Pete Sessions, or any of the other well-placed drug warriors in Congress.

So Boehner is a transparent opportunist. So what? He’s not the most flagrant example. That would be Julian Fantino, the former Toronto police chief who once compared marijuana legalization to legalizing murder, joining a Canadian cannabis company. He hasn’t even done the most damage of any formerly drug-averse politician who suddenly decided that weed was good. That title is shared by the California Democrats who opposed marijuana legalization in 2010—back when the state could have been the first in the country to legalize—before changing their minds once Colorado and Washington proved weed was a winner.

Developments like these were guaranteed to happen. This is how people operate. If Boehner can actually change some minds in Washington—if he’s the lobbyist credited with jamming through legislation getting cannabis out of Schedule I of the Controlled Substances Act—then great. He’s redeemed himself. He won’t, and you shouldn’t expect him to. You should expect more like him, and for the next few conversions to be even more shameless. 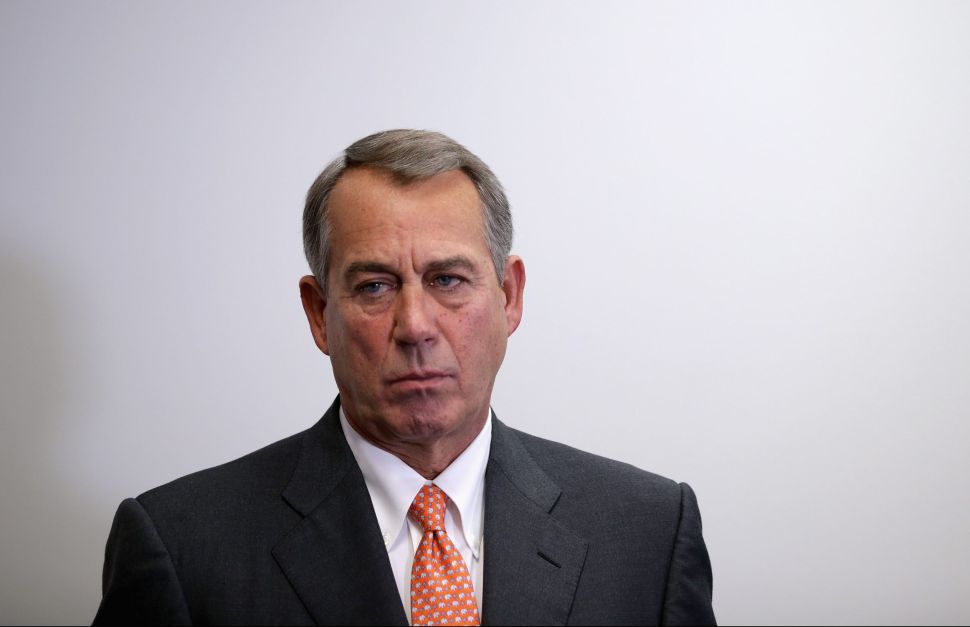