For years now I’ve wondered about the appeal of Frozen, the movie and, most recently, “the musical.” What is it about this piece that so galvanizes tween girls and 20-something gay guys—that is, beyond the obviously potent effect of a leading lady belting in a key a whole step above her vocal comfort zone?

All was made clear last night in a place you’d never expect: the Metropolitan Opera, when a luminous new production of Massenet’s Cendrillon reaffirmed that most basic truth of every fairy tale, antique or Disney: the twin keys to happiness in life are self-knowledge and integrity.

And this utterly enchanting retelling of the Cinderella story manages to get this empowering message across without the participation of Idina Menzel—though aficionados of the belt register must on no account miss Stephanie Blythe’s scene-stealing turn as the evil stepmother. Blythe’s thundering (and purely acoustic) chest tones are sufficiently primal to set Ethel Merman herself yelling four-letter words of ecstatic praise.

What a contrast to the infinite and subtle gradations of tone Joyce DiDonato selects to portray the gentle and unceasingly patient Lucette, the Cinderella character. Her curious vocal timbre, veiled and yet spiky, is almost as captivating as the heart-tugging sense of moral authority that informs even the most pedestrian of vocal phrases. From the very first note she sang, DiDonato enthralled: she was not just a mezzo in some opera, but a human being upon whose life seemed to hang the fate of the universe.

Massenet had the delicious idea of writing Prince Charming also for a female voice, which, for a modern audience (or at least this member of the modern audience) introduced a subtle gay subtext. As the Prince, mezzo Alice Coote, in a boyish pompadour and silk pajamas, was introduced literally coming out of the closet: the sulky royal is discovered hiding in a wardrobe.

Like DiDonato, she does not command at this point either a particularly dewy tone or easy top notes, but somehow they made their shared fragility work: what they presented was not a literal depiction of a fairy-tale romance, but rather a misty memory as recalled after a lifetime of devotion.

It may be that I was less than 100 percent scientifically disinterested last night, what with my eyes constantly misting up, but it seems this Cendrillon was musically about the finest thing the Met has done all season. The supporting performances all landed firmly on point, from the delectable French diction of Laurent Naouri as Lucette’s father to the fizzy coloratura of Kathleen Kim as the fairy godmother. The chic playing conductor Bertrand de Billy coaxed from the Met orchestra met Massenet’s diaphanous score (not so much gossamer as the very best silk tulle) more than halfway.

If the well-traveled production by Laurent Pelly looks a trifle understated in its new home on the Met stage, it is otherwise a model of wit and economy. Within a vast chamber wallpapered with the text of the original Perrault fairy tale, the grotesques of Lucette’s family and the Prince’s court pranced and bumbled. Dizzily whimsical costumes included a feathery confection for the fairy godmother that would surely have won the Couture Challenge had Project Runway been on the air in 1957.

Her singing was old-fashioned in the best sense of the term: technically assured, limpid and unerringly lovely. If anything, her performance felt a bit too easy: she walked her vocal tightrope (all the way to a crystalline high F) with such insouciance that the audience response was merely warm instead of frenzied.

Pratt has only one more performance this season (April 14), but Cendrillon blessedly continues through May 11. You simply have to see it, whether you’re a tween girl or (like me) merely a tween girl at heart. 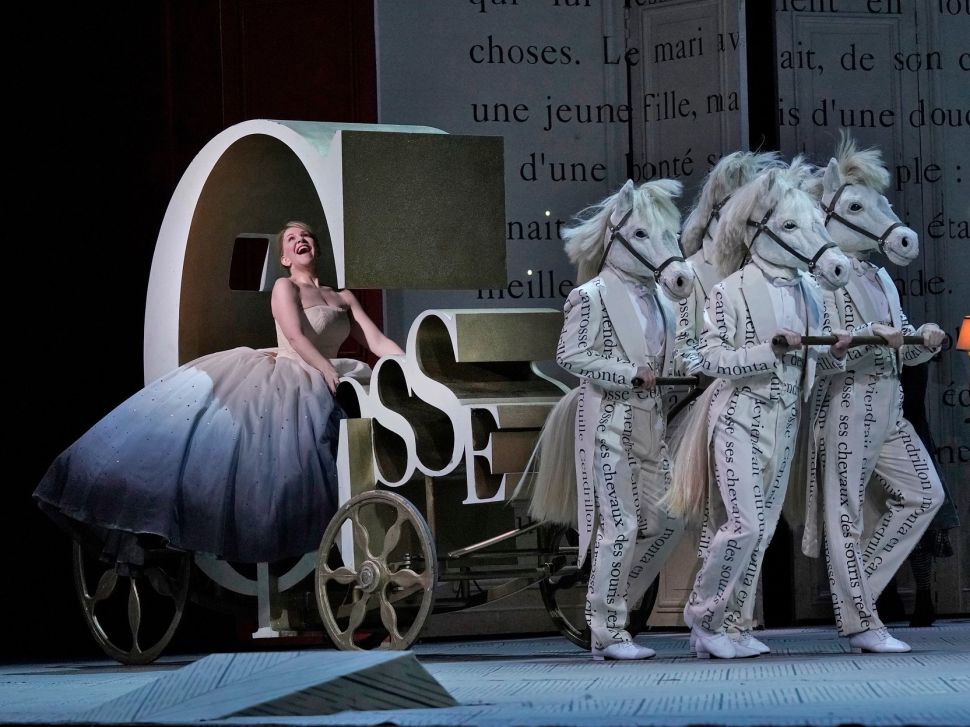