A New York City lawmaker is looking to mandate that residential buildings—including Trump Tower—adopt fire sprinkler systems after one civilian was killed and six firefighters were injured in a fire at Trump’s Fifth Avenue headquarters over the weekend.

FDNY investigators are still looking into what caused the fire, which struck the building on Saturday afternoon. Trump Tower only has sprinklers on floors 1 to 10, which is primarily commercial.

Brooklyn Councilman Robert Cornegy, chairman of the Council’s Committee on Housing and Buildings, put in a request on Monday to draft legislation that would require buildings like Trump Tower, as well as residential buildings with four units or above, to be retrofitted with sprinklers.

Cornegy insists that the sprinkler requirement is a “tool in a toolbox” that can ultimately result in the safety of “hundreds of thousands of New Yorkers.”

“We would like to think that at the very least, it provides an extra cushion of time to seek safety—if not putting out a fire in due time,” he said at a press conference announcing the legislation at City Hall on Monday afternoon.

In 1999, now-President Donald Trump, a developer, fought against a bill that required residential complexes to have sprinklers, Cornegy noted.

He later reversed course, saying that he would spend $3 million to install sprinklers. But once he became aware of a clause that exempted buildings built before 1999, Trump decided against putting in sprinklers, Cornegy added.

“There’s hundreds of thousands of residents who are living without the protections of having sprinkler systems, and I just don’t think that that’s fair and appropriate,” the councilman told Observer following the press conference. “So the law would make all buildings have to retrofit, so not just the buildings built after ’99 but all buildings prior to ’99.”

Cornegy also noted that they are examining past fires where sprinklers were not in place.

“We’re doing the research on several other fires that have taken lives over the last few months, were buildings that were four units and above, that didn’t have sprinkler systems, that were grandfathered in before 1999,” he added.

The councilman told reporters he has not yet spoken with Mayor Bill de Blasio or Trump about the proposed legislation. He maintained he is hopeful Trump will come around.

“I think above all else as a public servant, I’d like to think that I’m naive enough to think that people would be concerned that someone lost their life based on a loophole or based on the changing of a law,” Cornegy said. “We all, at our core, are here to serve—including President Trump. So I’d like to think that if we had the chance to sit and talk, I could get him to understand the importance of actually supporting the idea… and change this law.”

The victim who died in the fire, Todd Brassner, a 67-year-old art dealer who knew the late artist Andy Warhol, is said to have disliked Trump, who allegedly referred to him as a “crazy Jew.” Brassner had been trying to move out of the building since the 2016 presidential election but was unable to sell his 50th-floor apartment in the building, which was worth roughly $2.5 million in 2015.

The city’s Office of the Chief Medical Examiner said Brassner’s death was caused by smoke inhalation, but the manner of death has not been determined yet due to an ongoing FDNY probe.

In his tweet about the fire, Trump bragged that Trump Tower is a “well built building” and thanked the firemen and women but did not mention Brassner.

Cornegy said he is “surprised” Trump did not discuss Brassner’s death either through a public statement or on social media and argued he could “do himself a great service” if he acknowledged the loss of life.

“I’m surprised based on his propensity to use social media to get out every single thought that seems to be on his mind, I am a little bit surprised that he hasn’t… knowing the impact that it has on the city,” he continued. “What I understand about President Trump is that he is a proud New Yorker and not mentioning that is a little bit distressful to me.”

Melissa Grace, a spokeswoman for de Blasio, told Observer that City Hall will review the legislation.

The city’s Department of Buildings (DOB) did not immediately respond to a request for comment on Monday. 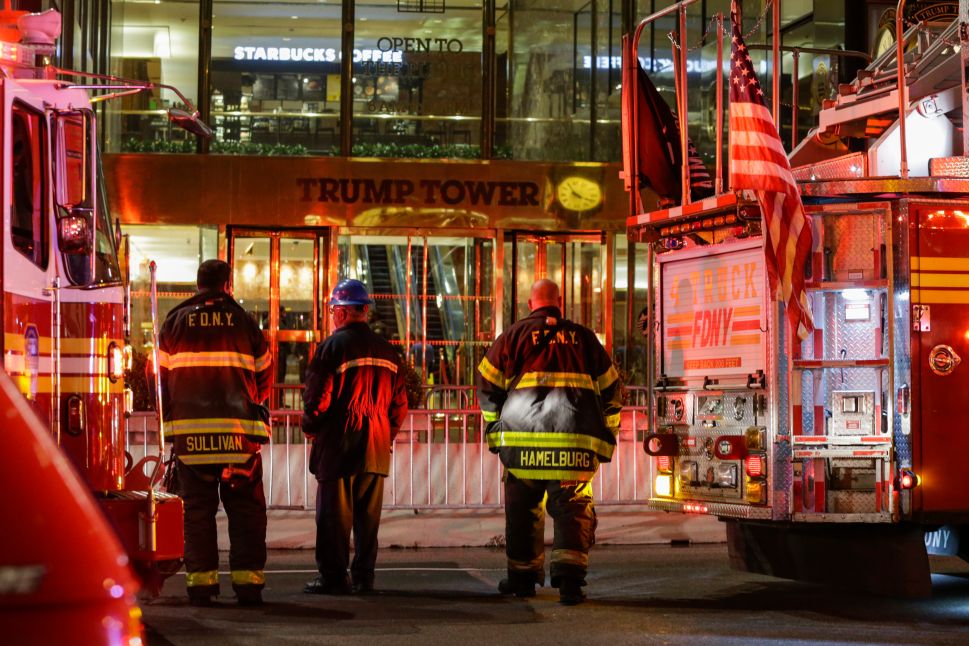