On Wednesday night at Barclays Center, 21-year-old pop star Lorde brought out an extra special guest—musician Jack Antonoff, her oft-rumored love interest. Antonoff, who famously dated Lena Dunham for five years, is allegedly in a relationship with an aspiring butt model…but he looked awfully cozy onstage with his songstress protégé.

This wasn’t the first time The Bleachers frontman has performed with Lorde, but it was their most romantic public interaction to date. Last summer, when Antonoff joined the Royals singer during her Governor’s Ball set, the audience wondered, “Is that her boyfriend?”

Queries about this romance spiked after Antonoff and Dunham’s Page Six-worthy break-up in January 2018—and there was even more speculation following Antonoff’s Twitter proclamation that it was just “dumb hetero normative gossip.” But halfway through this week’s dramatic, sold-out Brooklyn show, those dating rumors felt all but confirmed. Barclays has an enormous stage, yet the collaborators practically sat in each other’s laps as concert-goers whispered, “I knew it!”

To join Lorde onstage in downtown Brooklyn, Antonoff raced from Madison Square Garden, where his band Bleachers was opening for Pink. Everyone knows that hopping from one borough to the next, within the hour, is a sign of serious dedication.

His surprise appearance couldn’t have pleased his rumored girlfriend, Carlotta Kohl, an aspiring model-slash-artist-slash-St. Vincent’s personal assistant. Kohl’s derriere most famously posed for the cover of St. Vincent’s album Masseduction, which Antonoff produced. He and the blonde were spotted having dinner at Gemma in January and cuddling courtside at a Knicks game last month.

But if Antonoff shows up at Lorde’s show in Newark, New Jersey tonight, it will offer definitive proof they’re in love…or at least that they love to fuel romantic rumors. Per Instagram, he’s been spending time with his family, including designer Rachel Antonoff. And his hometown of Bergenfield, New Jersey is only a 40-minute drive from Lorde’s show at the Prudential Center. It’s also perfect timing, since Pink doesn’t have a concert tonight—her next show is on Saturday in Pittsburgh.

The Barclays Center show featured some obvious boyfriend/girlfriend banter, like when Lorde accused Antonoff of chewing gum and confirmed that the second she sees him, her “professionalism is truly gone.” In return, Antonoff teasingly revealed that Lorde walks the streets barefoot and eats sketchy bodega sushi. Lorde then covered St. Vincent’s “New York,” which was co-written by Antonoff. While St. Vincent maintains that the song was written about David Bowie—and not her ex-girlfriends Cara Delevingne and Kristen Stewart—it certainly sounds much more amorous than that.

If two public figures want to steadfastly avoid heteronormative gossip, playing a duet while staring deeply into each other’s eyes and whispering sweet nothings probably isn’t the answer. Singing the lyrics “New York isn’t New York without you, love” and “You’re the only motherfucker in the city who can handle me,” inches from someone’s face is suspicious, no matter how much you protest an alleged relationship.

@lordemusic and @jackantonoff covered “New York” last night in NYC and it actually brought me to tears. Thanks, guys. You killed it.

Most people assume Lorde is pining after Antonoff, but it’s entirely possible that she’s actually dating Justin Warren, a much older Universal Music executive that she’s worked with since 2013. Warren denied their relationship in 2016, after going on vacation with the then 19-year-old, but the next year they were spotted shopping for kitchenware. In fact, when Antonoff and Lorde were photographed together in Auckland this past February, Warren—who’s based in New Zealand—was standing just outside the frame.

Of course, Lorde and Antonoff could have been secretly together the entire time. Antonoff did call this the “best year yet,” so he doesn’t seem to be pining after anyone, whether it’s Dunham, Lorde, Kohl or Scarlett Johansson. 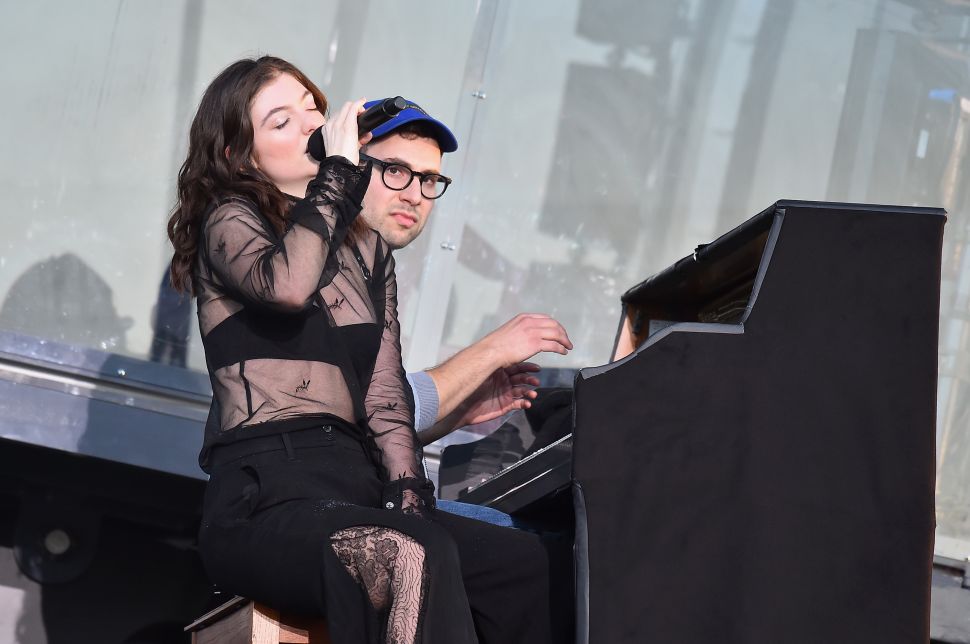