Oh, Mark Zuckerberg, if only the worst thing Facebook did was educate everyone on the hottest members of Harvard’s class of 2003.

Throughout 10 hours of congressional questioning over two days, Zuckerberg often mentioned his site’s humble beginnings in a Harvard dorm room. Of course, in the 15 years since then, Facebook has become a global superpower with over two billion monthly users.

But the Harvard memories weren’t the only ridiculously absurd parts of his testimony. Here’s a roundup of some of our favorite moments.

The fun actually began before Zuckerberg entered the room on Tuesday, when one of the spectators decided to make light of Russian meddling in the 2016 presidential election.

Someone came to the hearing dressed as a Russian troll. pic.twitter.com/ZdPEK9MDne

Dressing in costume for Senate hearings is actually a time-honored tradition. When Equifax executives testified before Congress last year, one onlooker dressed as the Monopoly Man.

During both days of testimony, Zuckerberg wore a suit and tie rather than this customary T-shirt and jeans.

That likely comforted White House chief economic adviser Larry Kudlow, who told reporters on Monday that Zuckerberg should avoid “phony bologna… hoodies and dungarees.” He also said he could help Zuckerberg “clean up his act.”

The Congressional Man of Mystery

Several Facebook officials accompanied Zuckerberg to Washington, D.C. But one in particular captured a lot of social media attention.

We’re on Each Other’s Team

Kaplan and his associates will likely be busy in the coming days following up with Congress about all of the things Zuckerberg didn’t know.

The Facebook founder and CEO didn’t answer many questions, frequently responding “I’ll have my team get back to you.”

Over the course of his two-day testimony, Zuckerberg used variations of this phrase over 50 times.

Zuckerberg often said that privacy was important to Facebook, but even he admitted the company’s own policies are impeding that mission.

“Long privacy policies are very confusing,” he said at Tuesday’s hearing. “We don’t expect that most people will want to go through and read a full legal document.”

“But everyone has the opportunity to…” Zuckerberg added, after being questioned further about Facebook’s terms of service.

Zuckerberg’s millennial outlook noticeably clashed with that of the senators questioning him (many of whom are over 80).

There were several moments during the hearings in which the tech titan was forced to educate senators on the economics of tech companies.

When Senator Orrin Hatch asked Zuckerberg how Facebook can sustain a business model when it’s free, he responded with four simple words: “Senator, we run ads.”

A Picture’s Worth a Thousand Words

The senator from South Carolina inspired some of Zuckerberg’s funniest testimony.

After reading a section of Facebook’s privacy policy, Graham said: “I’m a lawyer, I have no idea what that means.”

He also asked about Facebook’s business model and its relative lack of competitors:

Graham: “You don’t think you have a monopoly?”
Zuckerberg: “It certainly doesn’t feel like that to me.”

Senator Dick Durbin continued the comedy by asking Zuckerberg whether he would reveal the name of the hotel he was staying at in Washington or the people he messaged while there.

Not surprisingly, Zuckerberg said no.

“Everyone should have control over how their information is used,” Zuckerberg quickly shot back.

That may seem ironic coming from the head of a social media company, but Zuckerberg made clear on the second day of  his testimony that this issue was personal: he revealed that his personal data was included in the Cambridge Analytica breach that affected 87 million users.

Much was made in both days of testimony about Facebook’s founding motto, “Move Fast and Break Things.”

But as Zuckerberg pointed out, in 2014, the company’s mantra changed to “Move Fast With Stable Infrastructure.”

“It’s a much less sexy mantra,” he said.

That wasn’t enough for Congressman Greg Walden, who led the House of Representatives hearing on Wednesday.

“I think it’s time to ask whether Facebook may have moved too fast and broken too many things,” he said in his opening statement.

Congrats on Not Getting Subpoenaed, Mark

At least four congressmen at Wednesday’s hearing pointed out that Zuckerberg had come to Capitol Hill voluntarily.

“You’re not here because you’ve been subpoenaed, so we appreciate that,” Congressman Joe Barton said.

Barton, in particular, seemed to be a big fan of Zuckerberg. He creepily referred to the Silicon Valley honcho’s first visit to Washington in 2010.

“I’ve got a picture of you when you had curly hair,” Barton said. OK…

Maybe this is the tech version of: “As a father of daughters…”

Throughout Wednesday’s hearing, many representatives pointed out that their elderly parents used Facebook as a way to catch up with grandchildren, even though it undercut their message that Facebook is a popular tool used by everyone.

Congressman John Shimkus went into the most detail, talking about his 88-year-old father and his mother, who uses an iPad because she can’t handle a keyboard.

Scott Adams Got Some Great Publicity

Who knew so many congressmen loved Dilbert?

Texas Congressman Michael Burgess brought up a 1997 Dilbert comic strip in which the title character neglects to read a user license agreement.

Back in 1997, Dilbert got it right. Twenty-one years later, too few Americans read the "terms and conditions" we agree to everyday. Consumers should have the tools and resources they need to understand how to protect their own data. pic.twitter.com/FIJbb6BCfQ

Fellow Texas Congressman Gene Green then “followed up” on the cartoon.

It’s so comforting that congressmen get tech advice from the funny pages.

She started by comparing Facebook’s cozy community to The Truman Show. Then, she accused Zuckerberg of filibustering.

Blackburn was also one of five members of Congress who grilled Zuckerberg about Diamond and Silk, a pro-Trump vlogging duo who got kicked off Facebook because their content was deemed “unsafe to the community.”

“Diamond and Silk is not terrorism,” Blackburn said.

Someone Still Hates The Social Network

Congressman Billy Long took Zuckerberg back to his college days by asking about Facemash, the aforementioned prank website that Zuckerberg launched in college to rank women’s looks.

While confirming that Facemash was offline, Zuckerberg took the opportunity to slam a certain Oscar-winning film.

“There was a movie about this, it was of unclear truth,” he said.

Are David Fincher and Aaron Sorkin available for Social Network 2?

There were several factual issues over the two days of hearings that Observer can actually help out with.

First, on Tuesday, Senator Ted Cruz asked Zuckerberg if there was any data on how many Facebook employees contributed to Republican campaigns. Zuckerberg said he didn’t know.

As Observer reported in February, however, Facebook and Twitter donated over $2 million to Hillary Clinton’s presidential campaign but less than $35,000 to Donald Trump’s.

Then, on Wednesday, Congressman Tony Cárdenas informed Zuckerberg of the “breaking news” that Cambridge Analytica head Alexander Nix had been fired.

Well, he might need new staff. Nix was suspended from the company three weeks ago, but he still hasn’t been fired.

And Zuckerberg himself made one notable error near the end of Wednesday’s testimony.

Congressman Buddy Carter noted that illegal poaching has long been a problem on Facebook, which the CEO seemed to know nothing about.

That’s incredibly ironic, because last month Facebook was one of 21 tech companies which vowed to reduce wildlife trafficking across online platforms by 80 percent by 2020.

Your team better get back to you with better information next time, Mark. 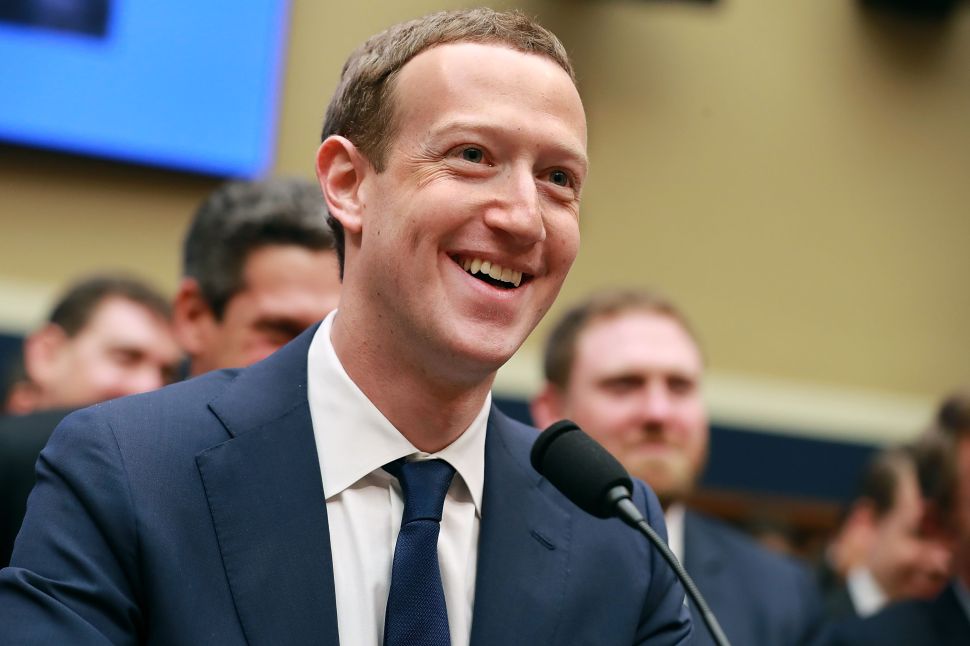