Before Meghan Markle was ready to join the English monarchy, she was almost Hollywood royalty…but not quite. Despite Suits somehow becoming the second highest rated scripted show on television (Game of Thrones came in first), she never became a household name.

In her eternal quest for fame, Markle did become known for her now-defunct lifestyle blog, The Tig, but that wasn’t her sole focus. After appearing on General Hospital in 2002, she had blink-and-you’ll-miss-it roles in everything from The League to the Beverly Hills 90210 reboot. During that pre-engagement era, Markle was a bonafide member of the “Who-niverse,” a term for D-list celebrities coined by Bobby Finger and Lindsey Weber, the podcasters behind “Who? Weekly.”

Here, we’ve ranked Markle’s best acting roles throughout the years, including her Deal or No Deal cameo and an appearance in not one, but two Hallmark Channel movies. Unfortunately, Suits did not make the cut. Sure, it might be her most notable role, but it’s nowhere near as entertaining—or regrettable—as her Tostitos commercial.

In this 2013 rom-com, Markle plays the sassy best friend who doles out advice like, “You still could have given him your number!” and “You could have offered to pay for his dry cleaning!” Hopefully, she’ll have more intelligent words of wisdom for Princess Charlotte and Prince George one day.

In Remember Me, Markle makes a cameo as “Megan” a bartender who sparks up a conversation with Tyler (Robert Pattinson) and Tyler’s best friend Tate (played by Aidan Hall). If Tate looks familiar, it’s likely you recognize him from his recurring role on Shameless. When Megan rejects Tate, Tyler reassures him, “that’s how people act when they’re really into you.” Markle’s ex-husband, Trevor Engelson, was the movie’s producer.

In a departure from her usual romantic comedies, Markle stars alongside Bella Thorne‘s ex-boyfriend, Gregg Sulkin, in this 2015 crime flick. Markle plays a woman dating “an artist…a street artist” who wears a lot of hoodies and has a “rebellious edge,” at least according to the trailer.

In Markle’s second-best Hallmark Channel movie, she stars as Amy Peterson, “a big city journalist” living in Chicago who’s “sent back to her small hometown to write a Fourth of July story and discovers the life and love she left behind.” Because the love of her life happens to be engaged to her best friend, plenty of made-for-TV hijinks ensue. Critics did not love the rom-com, awarding it a whopping 14 percent on Rotten Tomatoes.

Markle’s (objectively) best Hallmark Channel movie (it has a 27 percent on Rotten Tomatoes), follows a single woman “trying to change” how she chooses relationships…by using a checklist. In The Dater’s Handbook, Markle attempts to find love until ultimately realizing “the man she wants is the one who loves her for who she is.” Would Prince Harry have checked all the boxes?

In 2009, Markle made a 56-second appearance in The League, playing a woman that Mark Duplass (Pete Eckhart) attempts to pick up at a bar during his separation. In a true-to-life moment, Markle’s unnamed character says she doesn’t like the term “divorcée” because “it ages us a little bit.” She also admits to hating magic.

In this independent film from 2012, “nine estranged friends are reunited after their larger than life friend unexpectedly dies.” Wearing a decidedly un-royal boho-chic ensemble, Markle plays a snarky photographer who takes pictures of a man obsessed with showing off his manhood. Of course, the movie’s actual star is Stacey Dash of Clueless fame. Dash plays Lisa, a character embroiled in some kind of love triangle. For $2.99, you can experience the magic of Markle and Dash on Amazon.

For Markle’s nonspeaking cameo on the CW reboot of Beverly Hills 90210, the future royal wore some Snooki-era strapless dresses and had sexual relations in an SUV. Despite how brief her appearance was, this car scene goes down in infamy as her “raunchiest” err…performance (?) to date.

In her absolute best role to date, Markle appeared in a 2009 Tostitos commercial with a voice-over (that definitely isn’t her voice). In the iconic clip, the actress contemplates the number of ingredients in a bag of chips and a man named Gary who likes to wear short shorts. Hopefully, the royal family will play this clip as a part of her wedding video. 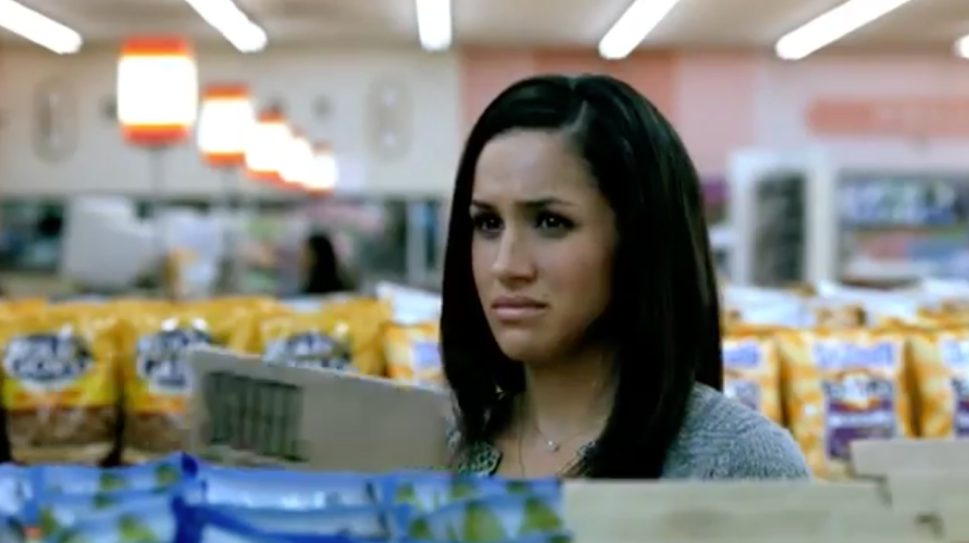