On March 14, I compromised my values and participated in a political protest with my classmates. Inspired by the recent Parkland shooting, we joined the National School Walkout. We pulled our coats on over our miniskirts and were shepherded into the street by our teachers. For 17 minutes, a sea of “empowered” Park Avenue Princesses held homemade posters and shouted motivational chants.

But I never wanted to be there.

Only an hour earlier, a simple conversation with friends had turned into a ferocious attack on my morality. I had commented that I was not going to participate in the Walkout because I hadn’t fully developed my own views on gun control.

Listening to both Republicans and Democrats, I wasn’t sure which party had the answer. The two sides, like they do on most issues, presented diametrically opposed solutions. Blue states were anti-gun. Red states were pro-gun. Should we arm teachers, as President Trump argued? Or should we make it harder to buy guns? Was there some way to meet in the middle? Our government must stop senseless gun violence—but with what kinds of laws, and would they make a difference?

When I questioned whether I should participate in the Walkout, my peers dropped their math worksheets and their jaws, and questioned my sanity for not rushing to join this movement. I tried to defend my unwillingness to participate in a protest before I had formed any views about gun laws—and I was accused of believing that “killing kids is okay.” I left in disgust and anger.

As I walked to my next class, the Dean of my school grabbed my wrist with excitement. I, Elizabeth Giuffra, a student who “does not align with either party,” was taking part in the Walkout! I gave her an awkward smile. She thought I was going to walk out because I happened to be wearing a jacket. All I had to do to get pulled it into the protest was wear the wrong apparel at the wrong time. My teachers assumed I was a part of the herd.

I was desperate. I wasn’t sure I wanted to walk out. I did not want to be a part of something I didn’t understand. I frantically texted my friend Amelia, a tried and true Republican. “Where are u rn? Are you going to the Walkout? I rly don’t wanna to do this 😬.” Amelia responded: All of the students who refused to walk out had been trapped in a classroom where teachers were taking the names of students who did not leave the building. The teachers wanted to “understand” why. Only four girls out of our 200-person Upper School decided to not walk out. Two percent of the student body was braver than me. Brave enough to say, “Hey, I’m confused, and willing to admit that I’m not a fake Social Justice Warrior for the trend.”

So, there I was, shivering on Fifth Avenue. Students clumped together, halfheartedly trying to start chants. Several girls posed for “Insta-worthy” shots with their cliques. Snapchat stories were covered in photos of pun-filled posters with sayings like, “I’ve seen more intelligent cabinets in Ikea,” and “Arms are meant for hugging.”

The Walkout intended to stir things up, to get things done in Washington. But an all-school fire drill would have caused more chaos on the Upper East Side.

I understand that “March For Our Lives” raised awareness about the tragedy of gun violence in our country. Too many people—often children—are killed and injured by guns every year, and we, as a nation, have become further desensitized as gun violence happens more often. But if the Left is going to reduce a life-or-death cause to a trendy Internet meme, progress won’t be made. Social protest, in turn, has become an unfortunate tool for the masses, to make them feel a little bit more empowered, a little bit more special. And bandwagon Gen-Z kids have redefined the significance of political protests for the worse.

March 14, 2018 was reminiscent of the most troubling day that I have ever witnessed at my school. On November 9, 2016, Donald Trump was elected president, with the support of forgotten working class people in Michigan and Pennsylvania. Students came to school dressed in black to mourn the “funeral of American democracy.” Tears were shed for the apocalypse. Classes were essentially cancelled.

My peers refused to speak to me once they heard the scandalous gossip that my parents were Republicans. Overnight, I became a crazy alt-right conservative—even though I self-identify as a left-leaning Libertarian. I was now a racist. A homophobe. Pro-life.

From that day on, I have posed as a faux feminist warrior in school, preaching the words of the safe Clinton Camp. I not only fear total rejection by my peers, but by my teachers.

I do not have a safe space to learn or to foster a unique political point of view. Isn’t school meant to encourage healthy discourse, to make mistakes—and grow? Too often our schools have obliterated the right to free speech; not through laws, but through unfortunate systematic change. The constant assemblies that are held “to educate” the student body on our country’s politics only further isolate the minority. Every kid who disagrees with the masses is attacked by the trenchant tongues of Social Justice Warriors.

Those who aren’t up-to-date on viral Buzzfeed stats or Instagram fads? We are deemed ignorant, our ideas illegitimate. And this environment has taught me to question the Left even more. Other students refuse to listen to my opinions, no matter how fact-filled and well-conceived they may be. Because I’m “different,” my words are dismissed.

At this point of political polarity in the United States, forcing a common political agenda onto teenagers is dangerous. It will produce a generation without an effective discourse with successful bipartisan legislation. If we are coerced by a self-righteous establishment into a homogeneous set of “appropriate” morals, progress will be deterred. Democracy will be deterred.

Now, I ask of you: let us who lie in the Middle live. Let us think without limits. Let us develop into unique adults without backlash. That’s what it means to live in a democracy. We need to think freely, not think what we are told. Let us disagree. 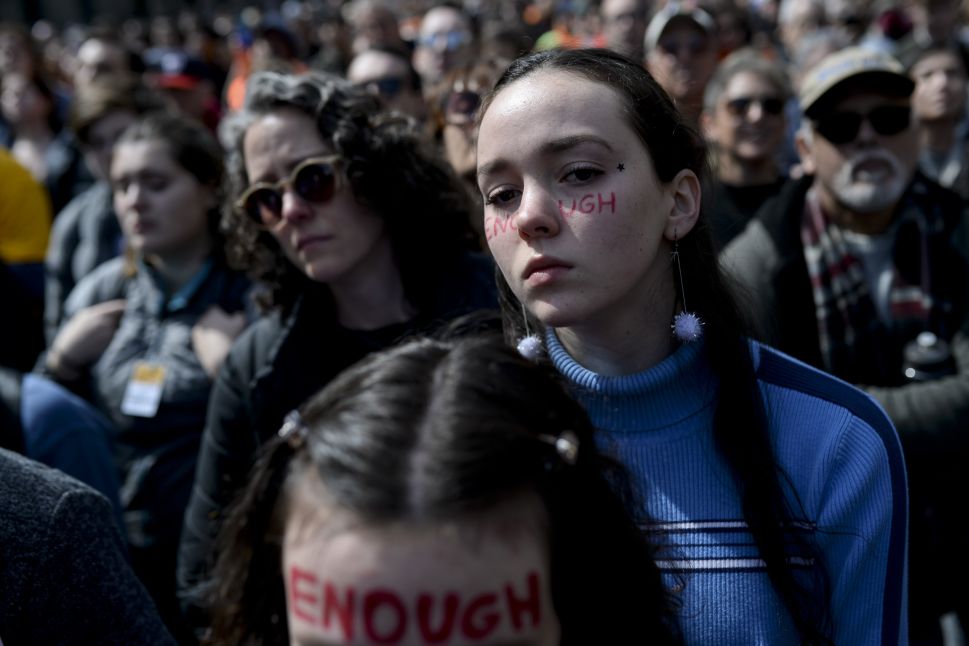