During Mayor Bill de Blasio’s first term, New York City raised more than $400 million in private and charitable funds through city-affiliated nonprofits for key initiatives seeking to combat inequity in the city, such as housing, immigration, health and workforce development.

When de Blasio first came into office, he created the Office of Strategic Partnerships (OSP), which administers public-private partnerships on behalf of the administration.

OSP manages city-affiliated, independent 501(c)3 nonprofits, including the Mayor’s Fund to Advance New York City, whose chairwoman is First Lady Chirlane McCray; the Fund for Public Health, whose chairwoman is Dr. Mary Bassett, commissioner of the city’s Department of Health and Mental Hygiene (DOHMH); and the Fund for Public Schools, which is headed by the city’s schools chancellor.

“The money is raised through the city-affiliated nonprofits… and they are independent nonprofits that are aligned with the mission of the city agencies, and these are nonprofits that have a development staff and they are raising public funds, leveraging private sector expertise or resources and working with city agencies on the programmatic side,” Gabrielle Fialkoff, OSP’s director and senior advisor to de Blasio, told Observer. “So what that means is… all the money raised is toward specific programs.”

OSP presided over the creation of partnerships such as Computer Science for All, an initiative through the Fund for Public Schools that seeks to bring computer science education to all public school students by 2025, and Connections to Care, which gives more than 40,000 New Yorkers access to mental health services in non-clinical settings.

It also oversaw NYCitizenship, which providers free legal aid for legal permanent residents to become citizens, and the Center for Youth Employment (CYE), a project of the Mayor’s Fund to Advance NYC, that looks to provide 100,000 internships, mentorships and summer jobs to youth by 2020.

Fialkoff said that 43 percent of the $400 million is foundation funding; nine percent, corporate; and three percent from individuals. She noted some of the funding also stems from federal or state grants to which the city applied.

The goal of OSP, she explained, is to unite the business, philanthropic and nonprofit sectors to team up with government.

“The de Blasio administration is committed to fighting inequality and creating access and opportunity for all New Yorkers,” Fialkoff continued. “So we believe that this work is too challenging—and too enormous of a crisis, frankly—to go it alone and that we really need an all hands on deck approach to fighting inequality.”

She also said the city recognizes the role of private funding “in the shadow of an $86 billion dollar budget,” noting that they did not want to take risks with public funds.

“I think of it as risk capital and in this way, in that if we’re going to innovate and if we’re gonna design new program models and think about ways to be more efficient models, then we should be testing those models not with public money but with private money,” she added.

The Ladders for Leaders internship program—under CYE— increased from 262 interns and 87 employers in 2013 to 1,850 internships and 600 employers last year. It also saw a surge in the number of vulnerable youth (youth in foster, shelter or juvenile justice systems) getting summer jobs: from 1,000 in 2014 to 3,170 in 2017. And the program resulted in the creation of seven Industry Funds for different sectors.

And since the Computer Science for All initiative started during the 2015-2016 academic year, more than 940 teachers in 524 schools have received training. During the last school year, 3,966 students took an Advanced Placement Computer Science exam, compared to 1,137 during the previous year.

Building Healthy Communities, an initiative under the Fund for Public Health, launched urban farms in four New York City Housing Authority (NYCHA) developments. There are two more under construction. The funds were also used toward 50 soccer fields in underserved areas and after-school programs for 10,000 youth.

And as of September 2017, 15 community-based organizations trained more than 1,000 staff in at least one Connections to Care treatment method—and 8,900 got services via the initiative.

As a result of the funds raised from the city-affiliated nonprofits, 70,000 families in the pilot program avoided eviction.

Another initiative, Juvenile Detention Diversion, which connects low-risk youth to community service programs, hit a 10 percent detention rate following a six-month pilot with 20 youth and families in the Bronx—a program that has since been expanded to the rest of the city.

And between April 2016 and September 2017, NYCitizenship services were given to 11,200 individuals, including screening close to 2,000 individuals for citizenship eligibility. Nearly 1,000 people filed naturalization applications and almost 350 clients were successful in getting naturalized.

During the mayor’s second term, OSP plans to work to support the plan to close the Rikers Island detention complex—which elected officials and activists have said should be closed sooner than the mayor’s 10-year time frame—provide more assistance for out-of-school, out-of-work youth and link the Building Healthy Communities initiative to de Blasio’s Action Plan for Neighborhood Safety (lowering violent crime in 15 NYCHA developments).

“As we look to the future, we’ll be pivoting to think about criminal justice reform and how mirroring really the mayor’s commitments of the next four years and his announcement of closing Rikers, how can the private sector help with that process and how can we use technology perhaps,” Fialkoff said. “If we’re all working together toward closing Rikers in as fast of a timeline as possible, what are some of the tools that we can use in the private sector?”

The news comes on the heels of troubles afflicting the city’s public housing system.

On Monday, the governor declared a state of emergency for NYCHA. And the U.S. Department of Housing and Urban Development now says the city cannot make any expenditures without its approval—a move the city criticized. The city demanded that the state release $200 million in previously pledged money (the state said it was awaiting a plan from the city on how it will use the money for specific projects). 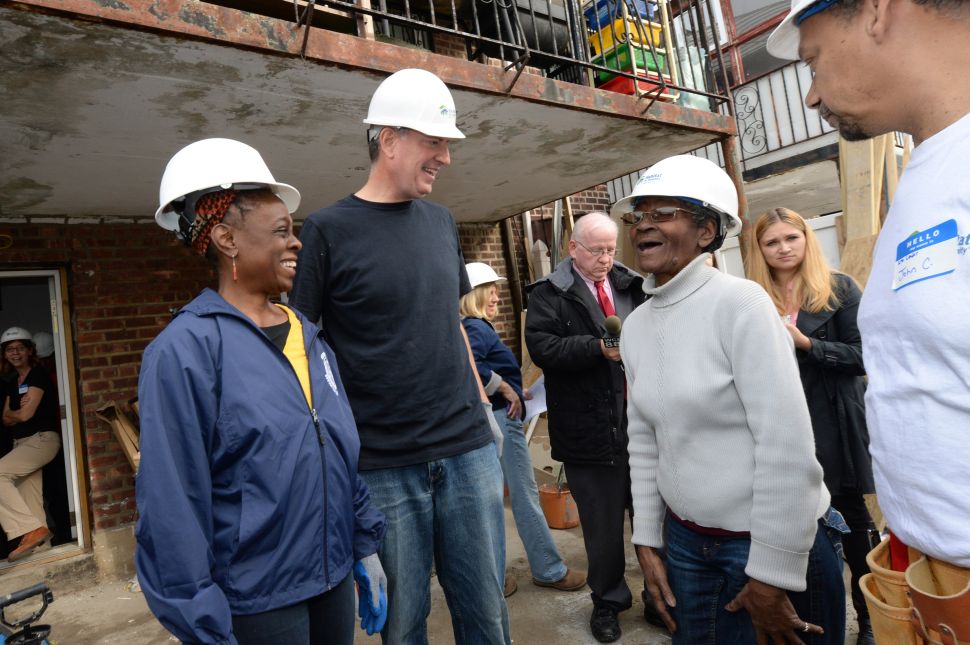