New York Mets pitcher Noah Syndergaard is following in the footsteps of many athletes before him, as he’s now a resident at Sky, a luxury building located in the heart of midtown west.

Past inhabitants at 605 West 42nd Street have included Syndergaard’s teammate AJ Ramos, as well as New York Knicks basketball players Kristaps Porzingis and Sasha Vujacic. Perhaps they were all attracted to the laundry list of amenities at the building or the fact that Carmelo Anthony helped design the basketball court. But it’s not only athletes who have lived in the building; Leonardo DiCaprio’s model ex-girlfriend, Nina Agdal, was previously renting a penthouse studio at Sky.

Syndergaard (and his famously luscious locks) is currently leasing a two-bedroom, two-bathroom corner unit and naturally chose to announce his arrival at the 71-story tower via Instagram post.

Syndergaard, who made his debut with the Mets in 2015, posted a photo to his feed showing himself seated in an upholstered armchair, showing off the view while gazing off into space.

“Between all of the amenities, the great concierge, and the amazing views of the city, Sky is an incredible place to call home,” Syndergaard said of the Moinian Group building. “With the expansive world-class gym, complete with an organic café, I only have to leave the building for Mets games. I love it!” As enthusiastic as the athlete appears to be about his new residence, we sincerely hope he does leave the confines of the apartment building at some point, other than heading to Citi Field.

It makes sense for Knicks players to be particularly eager about the building, as Madison Square Garden is practically around the corner. Citi Field, meanwhile, is located in an entirely different borough than Sky. However, Syndergaard is already quite familiar with the midtown west neighborhood; he was previously renting a 1,200-square-foot apartment at Manhattan View at MiMA, situated just a few avenues over, at 460 West 42nd Street.

Representatives for Sky couldn’t confirm the exact unit that Syndergaard is currently occupying, but a two-bedroom listed for $5,960 a month did go off the market in early March. Syndergaard has been Instagramming from his new apartment since at least March 28, so that timeline seems about right. Of course, it’s not clear how much Syndergaard is doling out for his new home—perhaps he got a discount for his overly enthusiastic social media posts.

The Sky reps did disclose that Syndergaard’s new home features interiors by Rockwell Group, including a custom Italian kitchen with quartz countertops and Miele appliances. The unit boasts walnut-stained oak wood floors and porcelain-tile bathrooms, in addition to views of the Hudson River, which can be taken in from the private balcony. Hopefully, it also has ceilings that are high enough to accommodate the 6’6″ athlete.

And, of course, there are the amenities. The 70,000-square-foot Membership Club includes access to the Life Time Athletic at Sky, with a multi-level athletic club, indoor lap pool, plus two outdoor pools. There’s also a private park and the aforementioned basketball court, in addition to a café, a billiards lounge and a Turkish-style hammam. We can’t imagine why the Mets pitcher would prefer to get his workout fix in his apartment building rather than at a professional training facility, but that should be good Instagram fodder for any future photoshoots.

Syndergaard seems to be acclimating to his new digs a bit better than another baseball player in New York. The Yankees’ Giancarlo Stanton, who was traded from the Marlins at the end of the 2017 season, told The New York Times that he was having some moving issues after his first home game in the city—the furniture he’d ordered for his new abode hadn’t been delivered yet, and repairs and upgrades are needed. Apparently, the hassle of moving apartments is just as stressful for athletes with multimillion-dollar salaries as it is for everyone else! 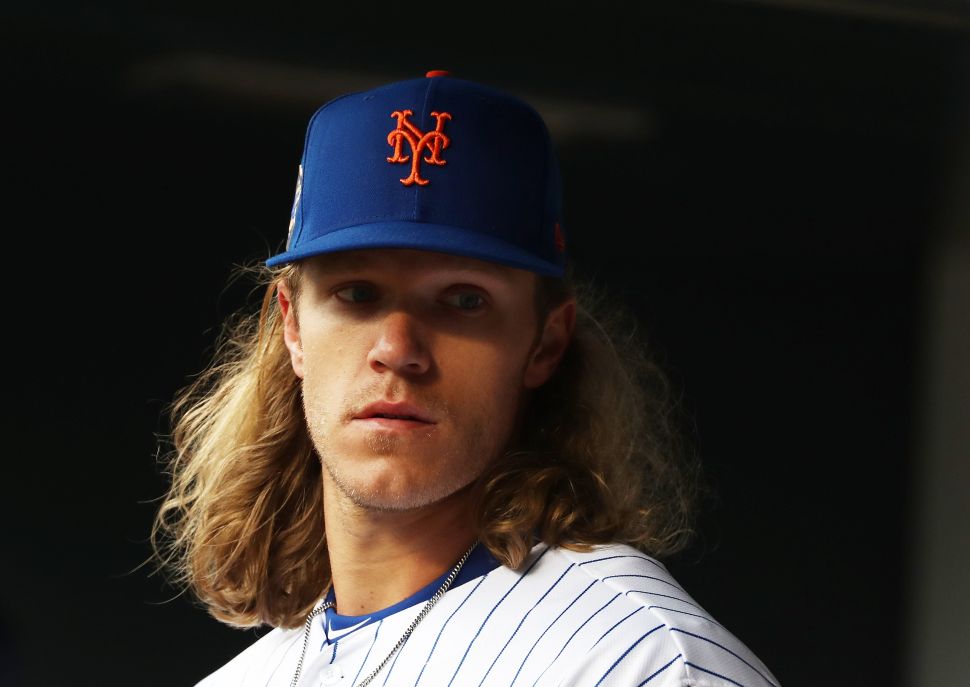