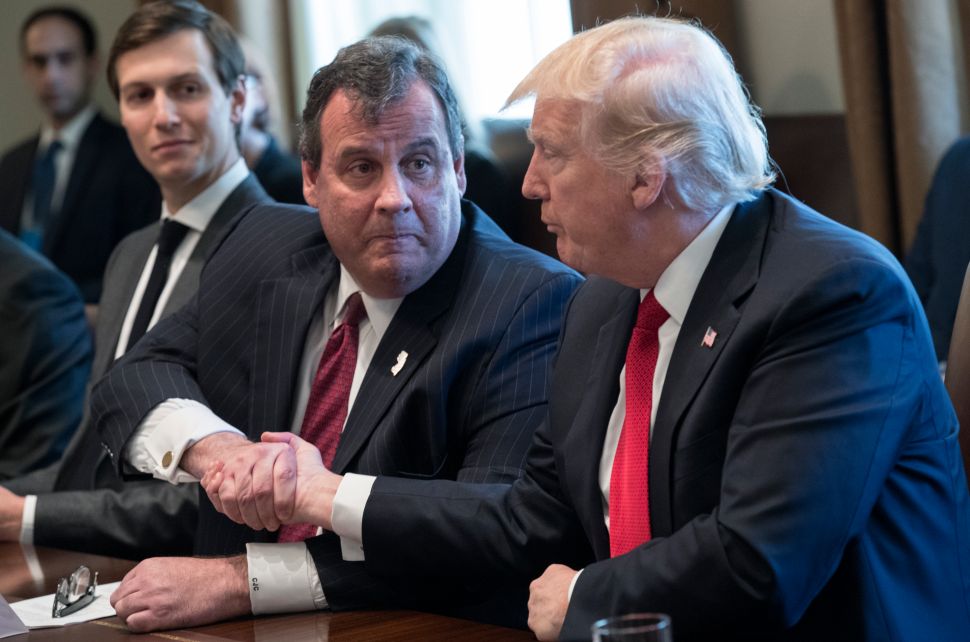 While the former governor said the president is very angry about Monday’s FBI raid on the offices of his personal lawyer, Michael Cohen, he understands the consequences if he were to dismiss Mueller, according to a report on NJ.com

Quote of the Day: “At some point, you either crush the golden goose or it … flies away to Florida. Either way, you don’t get those golden eggs.” — Sen. Declan O’Scanlon, warning against Gov. Phil Murphy’s planned tax hikes.

Trump Plans to Nominate Christie Ally for Federal Judgeship
President Trump announced on Tuesday that he intends to nominate Paul Matey, an ally of former Gov. Chris Christie, to be a judge on the U.S. Court of Appeals for the Third Circuit.
Christian Hetrick, Observer Read more

Phil Murphy Hasn’t Sold Fellow Democrats on His Tax Hikes
Gov. Phil Murphy’s new spending plans are in jeopardy. And members of his own party are the ones putting the governor’s vision for New Jersey at risk.
NJ.com Read more

Phil Murphy Not Backing Down on Plan to Drive up Taxes, Treasurer Tells Lawmakers
Gov. Phil Murphy is sticking to his plans to raise income and sales taxes even if higher-than-expected collections from income taxes due next week can pay for part of his agenda on their own, Murphy’s state treasurer told lawmakers.
The Record Read more

FERC Says PSEG Subsidiary Made False Statements Over 9-Year Period
A federal agency is alleging a subsidiary of Public Service Enterprise Group made false and misleading statements in bidding into the nation’s largest energy market, a process that helps determine how much consumers pay for electricity.
NJSpotlight Read more

Lawmaker Says State Aid Promised to Some Districts Will be Reduced
For a budget that increases spending by $1.5 billion to $2.7 billion, depending on how you do the counting, Gov. Phil Murphy’s $37.4 billion spending plan has managed to nevertheless find robust groups of detractors.
NJ101.5 Read more

State Shortchanges Poor Towns in South Jersey On Municipal Aid
Millions of dollars in state aid gets distributed to municipalities each year, but the state is shortchanging the poorest communities in South Jersey, compared to those in other parts of New Jersey, according to a new report.
NJSpotlight Read more

Cory Booker: Big Pharma Should Have Lowered Prices With Tax Cut
After getting a windfall from tax reform, the nation’s biggest drug companies handed out bonuses to employees, increased research and development, plotted expansions and set aside billions of dollars to to buy back their own stock.
Asbury Park Press Read more

State Republicans Prepare for White House Support
State Republican leaders are preparing to receive an influx of national support for this year’s congressional campaigns. In a conference call last week between most of the county Republican committee chairs, the GOP state committee and White House political director Bill Stepien, party heads touched base on the upcoming elections in preparation for support from the White House and the national branch of the GOP.
New Jersey Globe Read more

Judge Orders Alleged Fulop Stalker Released From Jail
The woman jailed last week on charges she stalked Mayor Steve Fulop will be freed from jail today after prosecutors failed to convince a judge to detain her through her prosecution.
NJ.com Read more

Newark Man Turned Over to Immigration Officials After Washington Traffic Stop
A routine motor-vehicle stop in Washington resulted in the driver being turned over to immigration officials on an outstanding warrant for failure to report for removal from the United States.
The Record Read more

Paterson: Boys Academy Among NJ’s Worst Schools
An all-boys academy that opened three years ago in an attempt to create a magnet program to help male students has become one of the worst-performing elementary schools in New Jersey, according to the state.
The Record Read more

Deal to Develop Mahwah Residential Drug Treatment Center Falls Apart, New Partner Sought
A onetime Catholic retreat center in Mahwah was to have been transformed into a residential drug-treatment center operated by Hackensack University Medical Center and the Carrier Clinic, until a deal with a management company fell apart earlier this year.
The Record Read more

Rockland: Deadline Approaches for O&R Reimbursements
As the deadline approaches for Orange and Rockland customers to be reimbursed for food and medicine spoilage that occurred during the March nor’easters, the company said those customers would automatically get their bills reduced.
The Record Read more

Family’s Confusing Address Costs Them $10K to School District
A woman who lives in Brick but has a Howell mailing address owes the Howell township school district more than $10,000 because she sent her child to the wrong district.
NJ101.5 Read more