The Department of Justice quickly ascertained that when it came to his work for the Trump Organization, Cohen wasn’t much of a lawyer, rather a clean-up man for Trump’s missteps with women and the arranger of unsavory business deals with an assortment of dubious characters, many of them from the former Soviet Union. Cohen’s court appearance yesterday was guaranteed to be a barn-burner, given the Trump consigliere’s over-the-top media antics, to say nothing of the presence in court of Stormy Daniels, the adult actress and former Trump paramour who claims to have taken a $130,000 payment from Cohen to purchase—or at least rent—her silence for the 2016 election.

But Stormy, whose public telling of her tale sent Cohen down the road to perdition, turned out not to be yesterday’s big draw. Instead, it was Cohen himself and his suspiciously short client list. Trump was Client Number One, as everyone knew, while it recently emerged that Number Two was Elliott Broidy, a venture capitalist, Trump backer, and Republican macher whom Cohen assisted by arranging a $1.6 million hush-deal with a Playboy model who claimed Broidy had impregnated her. When this payoff came to light last week, Broidy resigned from his senior post with the Republican National Committee.

But who was Client Number Three? Cohen desperately did not want to reveal that, but when pressured by Judge Kimba Wood, his legal team disclosed that it was none other than Sean Hannity, the right-wing talker, Fox News stalwart and Trump superfan. A collective, audible gasp overtook the courtroom as this bombshell eclipsed even the presence of Stormy Daniels in a pink suit. Suddenly, Sean Hannity found himself right in the middle of the president’s legal drama. The Fox News star had taken his vociferous support for Donald Trump to the level of sharing his dodgy attorney.

A few hours later, Hannity retorted that he had never been Cohen’s client, really, asserting that they had discussed minor matters, and not in any official capacity. He explained, “My discussions with Michael Cohen never rose to any level that I needed to tell anyone that I was asking him questions. And to be absolutely clear, they never involved any matter, any—sorry to disappoint so many—matter between me, a third party, a third group, at all. My questions almost exclusively focused on real estate.”

This directly contradicts Cohen’s statement that Hannity was his client, while the latter’s denial of any formal legal relationship undermines any claim to attorney-client privilege. Hannity’s statement raises more questions than answers—“almost exclusively” for instance—moreover, if this relationship was so innocuous, why did both parties go to such great lengths to conceal it?

Then there’s the reality of who Michael Cohen is. Whether or not he visited Prague in 2016 to set up a clandestine back-channel between the Trump campaign and the Kremlin, he is no sense a normal attorney. You go to Cohen to arrange a payoff for a no-longer-wanted woman or to set up a shady business deal with shady people from the former Soviet Union—not because you need a lawyer. (It seems quite a coincidence that Broidy, his Client Number Two, is under criminal investigation for his work on behalf of VTB, a sanctioned Kremlin bank.) Since Hannity has protested in a roundabout way that no “third party” like a porn star was involved—who was?

This is to say nothing of the fact that Hannity is a very wealthy man who can afford all the top-shelf legitimate attorneys he wants, if he has legal problems to contend with. Fox News, too, has platoons of lawyers on call to assist its stars if they get into a jam. Why Hannity would talk to the not-quite-a-real-lawyer Cohen, then, lingers as an important question requiring a more clear-cut answer than the right-wing celebrity has offered so far.

Then there are the ethical optics here, which look terrible for Hannity and Fox News alike. Hannity spoke about Cohen many times on Fox News—usually decrying the FBI moves against him in hysterical language—as Trump’s attorney found himself in the media spotlight recently, and Hannity even had him as a guest on his popular radio show. At no point did Hannity disclose his relationship with Cohen, whatever it was. This is a serious ethical lapse, no matter how you look at it, and no matter how many times Hannity insists he is “not a journalist,” he works for Fox News, which claims in its very title to be a news organization, not a mere propaganda outfit.

This is hardly the first time that Hannity’s lack of basic journalist ethics has been on display, and neither is it the first time his ethical lapses on-air involve the Kremlin. His months of pushing absurdly false accounts of the murder of Seth Rich, the Democratic National Committee staffer who was gunned down in Washington, D.C. in July 2016 by a still-unknown killer, caused anguish to Rich’s grieving family. This was an act of cruelty, pushing noxious lies to imply that Hillary Clinton had Rich assassinated, that originated in the Kremlin. As I reported last year, Hannity’s ugly Seth Rich fantasy was, in fact, disinformation written by Russian intelligence and pushed online within days of the 27-year-old’s murder.

It hardly seems a coincidence that WikiLeaks played a key role in pushing Kremlin lies about the Rich murder, given Hannity’s close ties to that organization and its boss, Julian Assange. Since Trump’s own CIA director has called out Assange and his outfit as a Kremlin cut-out and “a hostile intelligence service,” one might think Hannity would be cautious in his dealings with the WikiLeaks head, holed up in the Ecuadorian embassy in London since 2012, on the lam.

But no. Just this January, Assange attempted to direct-message Hannity on Twitter, offering dirt on Democrats, suggesting they communicate via “other channels.” As I explained at the time:

Given Hannity’s role as a top media booster of Team Trump, this merits scrutiny. Moreover, Hannity and Assange have been in touch frequently enough that Assange could refer to “other channels” of communication without further explanation. In other words, this is a clandestine relationship, as spies worldwide would call it.

I concluded my column by summing up Hannity’s role in the Trump administration’s Kremlin conundrum:

Hannity is a propagandist, not a journalist, by his own admission, but if he has served as a witting conduit for lies crafted by Russian spies, Fox News needs to explain why they are airing Kremlin Active Measures aimed at the American public and calling it “news.” Intelligence Community friends have told me that Sean Hannity has been under counterintelligence investigation for some time, based on his clandestine ties to Moscow. Now we know why.

With the revelation that Cohen has been Hannity’s attorney, in some fashion that neither of them wished to disclose, it is even more imperative that Fox News explain why it keeps a Kremlin propagandist without any semblance of professional ethics on the air. If they fail to do so, that network is exposing itself to counterintelligence scrutiny as well.

To conclude, we have Sean Hannity pushing Kremlin-scripted disinformation. We have his clandestine contacts with WikiLeaks, a known front for Russian intelligence. Now we have his consulting with a dubious attorney he shares with the president, whose Moscow links are the subject of intense investigation. In the memorable phrase of that wartime spymaster turned novelist Ian Fleming, “Once is happenstance. Twice is coincidence. The third time it’s enemy action.” 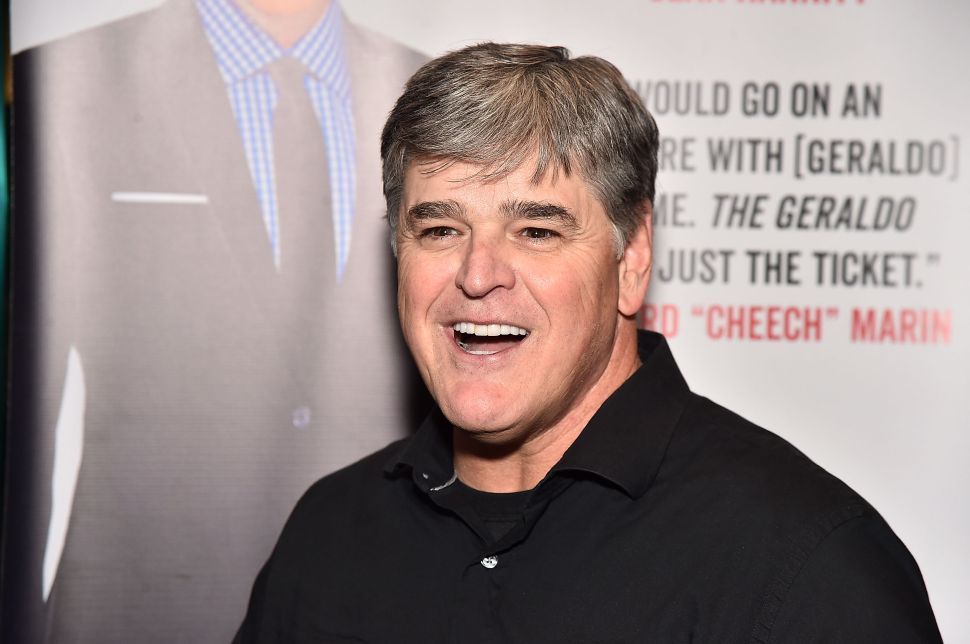