Harvey Weinstein and President Donald Trump inspired some of the year’s best journalism. As such, stories about them dominated this year’s Pulitzer Prizes. Winners for the 102nd annual awards were announced today at Columbia University.

The Pulitzer for Public Service was awarded to Ronan Farrow of The New Yorker and a New York Times team led by Jodi Kantor and Megan Twohey. These reporters exposed sexual predators like Weinstein in October, galvanizing the #MeToo movement.

Other categories, however, were all about Trump. For the second year in a row, the Pulitzer list was dominated by hard-hitting stories about the president and his impact around the country and world.

The New York Times and The Washington Post shared the national reporting prize for their coverage of Russian interference in the 2016 presidential race and how accusations of election meddling affected the beginning of the Trump presidency.

The Post won an extra prize for investigative reporting, which recognized its coverage of the U.S. Senate race in Alabama between Doug Jones and Roy Moore. Nine women accused Moore of sexual misconduct, claiming he had propositioned or assaulted them while they were underage.

A woman also approached the Post with a dramatic, false story about Moore impregnating her as a teenager and then forcing her to have an abortion. The paper investigated and determined she was part of a conservative sting operation, and so published a damning piece exposing her methods, which was also recognized by the Pulitzers.

John Archibald of the Alabama Media Group won the award for Commentary in recognition of his columns on the Jones-Moore race.

Trump’s influence was also felt in the Explanatory Reporting race. The Arizona Republic and USA Today Network shared the prize for their investigation of the practicalities of the president’s proposed border wall.

Reuters won the Pulitzer for International Reporting for its work revealing connections between Philippine President Rodrigo Duterte and police assassination squads. Trump has boasted that he has a “great relationship” with Duterte.

Even the photo categories had Trump-based overtones.

Ryan Kelly of The Daily Progress in Charlottesville, Va. won the Pulitzer for Breaking News Photography for a shocking image of a car plowing into counter-protester Heather Heyer. After Heyer’s death, Trump claimed there were “very fine people on both sides” of the white nationalist rally.

Other stories had nothing to do with Trump but were similar examples of reporting at its best.

Rachel Kaadzi Ghansah of GQ won the award for feature writing for her wrenching portrait of Dylann Roof, the Charleston church shooter.

These stories “uphold the highest purpose of a free and independent press, even in the most trying of times,” Pulitzer Prize Administrator Dana Canedy said at the ceremony. “Their work is real news of the highest order.”

This mix of voices was especially evident in the arts and letters categories. James Forman Jr. won the Pulitzer for nonfiction for Locking Up Our Own: Crime and Punishment in Black America, an exploration of the treatment of African-Americans in the criminal justice system.

And none other than Kendrick Lamar won the Pulitzer Prize for Music for his rhymes focused on modern African-American life. 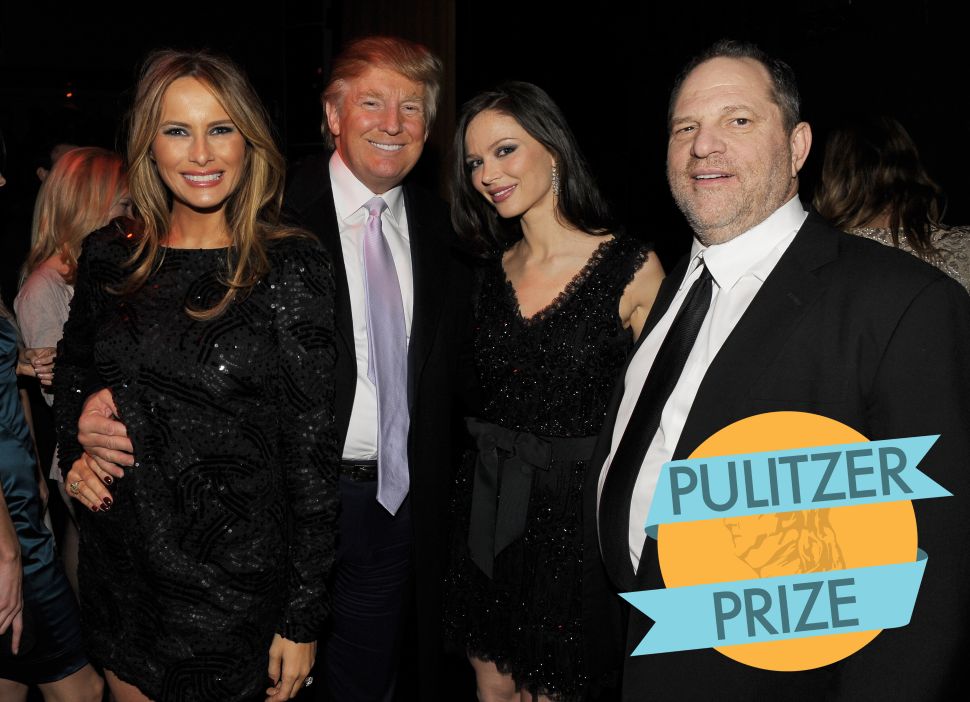