A few days ago, I addressed the troubling issue of Sean Hannity, the Fox News star, and his hidden ties to the Trump administration. With the revelation that Hannity shares an attorney with the president—namely the disgraced Michael Cohen, who’s now a key player in the Department of Justice’s investigation of the White House and its secret Kremlin links—it’s high time to ask exactly what sort of “journalism” Hannity is pushing at Fox News.

Moreover, when coupled with my previous revelations of Hannity’s “reporting” of rancid disinformation scripted by Russian intelligence as “news,” plus his clandestine relationship with WikiLeaks—said by President Donald Trump’s own CIA director to be a Kremlin front—Fox News is making itself a player not just in the Trump administration, but a target of any fair and balanced investigation of it. As I stated:

With the revelation that Cohen has been Hannity’s attorney, in some fashion that neither of them wished to disclose, it is even more imperative that Fox News explain why it keeps a Kremlin propagandist without any semblance of professional ethics on the air. If they fail to do so, that network is exposing itself to counterintelligence scrutiny as well.

To the surprise of nobody who has observed that network in action, Fox News quickly decided that Hannity’s ethical missteps regarding Cohen were no big deal. Per its statement on the case: “We have reviewed the matter and spoken to Sean and he continues to have our full support.” Nevertheless, the network’s own media analyst explained that Hannity was clearly in the wrong, ethically speaking, by commenting many times on-air about Cohen, invariably favorably, without divulging his relationship with him.

Other reports are even less favorable to the network and its ethical standards, rather lack thereof. Vanity Fair this week quoted anonymous staffers at the network about what it termed the Hannity-induced “crisis”: “This is the most embarrassing thing I’ve ever seen,” stated one. Another added, “This is bad. It violates every rule of journalism.”

That said, it’s not difficult to divine why Hannity remains on the air. He’s a headliner, the network’s most prominent talker and nighttime draw for its pro-Trump viewers. Moreover, Hannity’s astonishingly close relationship with this White House, viewed negatively as almost a parody of “access journalism” by outsiders, seems to only bolster his position at Fox News. As The Washington Post reported this week, Hannity talks frequently with Trump, serving as a senior advisor to the Oval Office and playing a pivotal role in the administration’s media war against Trump’s enemies—above all Special Counsel Robert Mueller and his investigation of the president’s Kremlin ties. The Fox News star “basically has a desk” in the White House, explained one presidential adviser to the Post.

Normal journalism, this is not. Since I’ve castigated the mainstream media for its fawning over President Barack Obama, allowing his staff to play them like an instrument, particularly regarding foreign policy, let me add that the Hannity case outstrips even those low-points in terms of journalistic integrity. Clearly Fox News is happy to let its leading on-air personality act as a propagandist for Trump. It’s high time for the network to remove “news” from its title if Hannity is its idea of journalism.

Worse, Fox News seems untroubled by the fact that Hannity isn’t just a Trump superfan-cum-consigliere; he also has disturbing ties to the Kremlin and its agents. Since Hannity’s pushing of Russian-scripted disinformation on Americans has been reported for nearly a year, the network can’t say it didn’t know. Fox News therefore is making the unsettling—not to mention potentially politically hazardous—choice to serve as a witting cut-out for the Kremlin’s lie machine.

Perhaps there are no surprises here at all, however. This week, Latvian Public Broadcasting reported an astonishing story about how Fox News operates in their country. As unmasked by a local investigation, Russian-language versions of the network’s programming that are broadcast in Latvia aren’t merely translated; they’re edited for content in a pro-Kremlin direction. Per the report, which cites internal Fox News regulations:

Translators have to follow Russian subtitling guidelines requiring glossing over or ‘softening content’ concerning accidents, homosexual relationships, ‘anti-Russian propaganda,’ narcotics, extremist activities and suicides. For instance, the translators are instructed to ‘soften’ all negative language about the Russian military and space program, policies of the Russian president and government, while positive texts about same-sex relationships have to be made more generalized so they could be attributed to relationships of any kind.

Let’s be perfectly clear here: Fox News is requiring its content being broadcast in a country that is a member of both NATO and the European Union to be edited to be more pleasing to the regime of Vladimir Putin. This is no small matter in Latvia, a country of only two million people, more than one-quarter of whom are ethnic Russians. That minority is habitually exploited by Moscow in its propaganda aimed at NATO’s eastern frontier. For years, the Kremlin has waged an aggressive, full-spectrum information war against Latvia, attempting to foment divisions in that country by making its Russian minority feel alienated and more loyal to Moscow than to Riga. In extremis, many Latvians worry, this noxious disinformation campaign could be a precursor to an actual Russian invasion—an event that has happened several times in the small country’s history.

Fox News is unambiguously on the side of the Kremlin in this information struggle against little Latvia—and the entire Western world. It’s not just what Fox News is beaming into the Baltic states that merits scrutiny. The network’s reports on Latvia for Western audiences—for instance one last month pushed blatant Russian propaganda and cited the Centre for Research on Globalization, a notorious Kremlin disinformation front—likewise deserve investigation.

Above all, Americans should ask what Fox News’ relationship with Putin’s regime actually is. It’s one thing to allow known disinformateurs like Sean Hannity to push Russian-made lies on air; it’s even worse to give Moscow editorial control over its “reporting.” If Fox News is skewing the news in a pro-Kremlin direction for political effect in a free and democratic society like Latvia, they can do it anywhere. 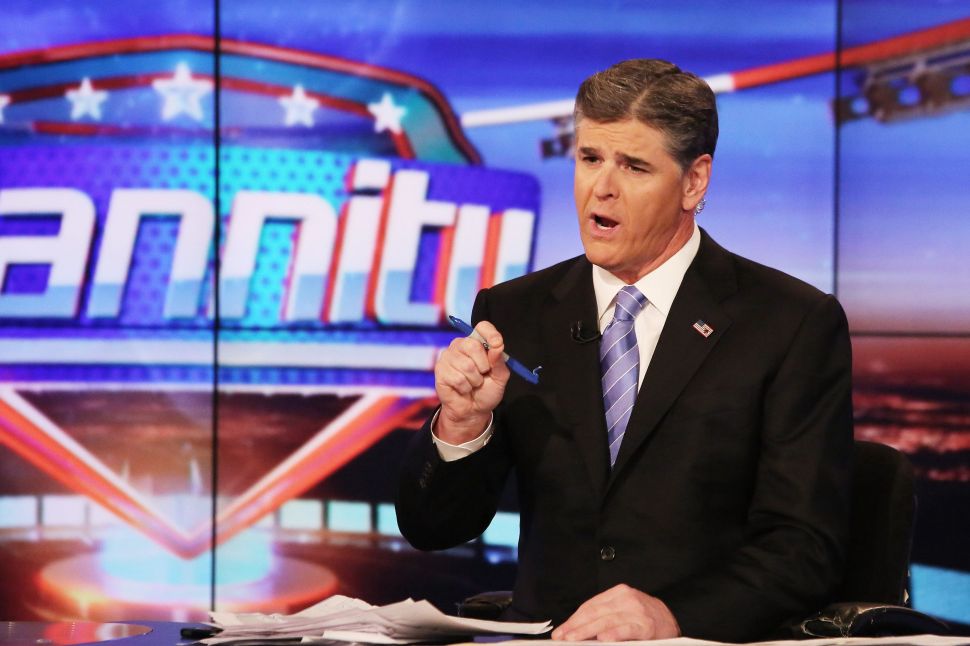